We lauded ourselves in being able to give you 11 Things You Did Not Know About Karl Lagerfeld. One thing everyone knows though is that the man never fails to amaze. Take the latest Chanel show for instance. Karl Lagerfeld transformed the Grand Palais into a grand street spectacle, instead. While last season, the designer opted for a “supermarket show” Chanel’s spring 2015 collection received an even louder showcase, if that’s even possible.

While Chanel’s latest collection sees ’70s-inspired ensembles, complete with wide leg trouser suits, knee length skirts, patterned knee-high boots, and shirts in vivid shades of purple, fuchsia and burnt orange, at the recently held show, these were accessorized with signs such “Feminism Not Masochism” and “Ladies First” and quilted megaphones. Even the one male model, Baptiste Giabiconi waved a “He For She”. 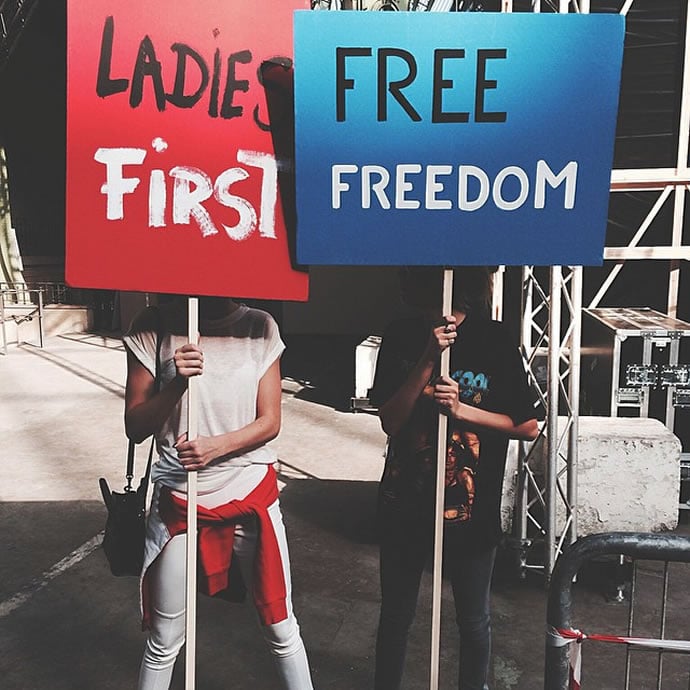 But if the Grand Palais-gone-Paris boulevard played host to a feminist rally, the words, “Tweed is better than tweets,” on another banner brought in some comic relief besides announcing the latest collection’s usage of the House favorite tweed. Check out the video if you want to see some of the stylish protestors, namely Gisele Bundchen, Gigi Hadid and Kendall Jenner. Not to mention, leading lady, Cara Delevingne. And remember, “History is HER story.”

Tags from the story
Fashion-Show, Karl-Lagerfeld