For a few years now Jony Ive has become synonymous with Apple, almost as much as, dare I Say it, as Steve Jobs. But the fact is that the design king has been instrumental in taking Apple’s devices, interface, and now their stores, to new levels. September 19 saw the very first store to be designed by Ive unveiled in the Belgian capital of Brussels. It’s just as simplistic and character driven as any of Apple’s previous stores and is sure to draw crowds of Apple fans and then some. 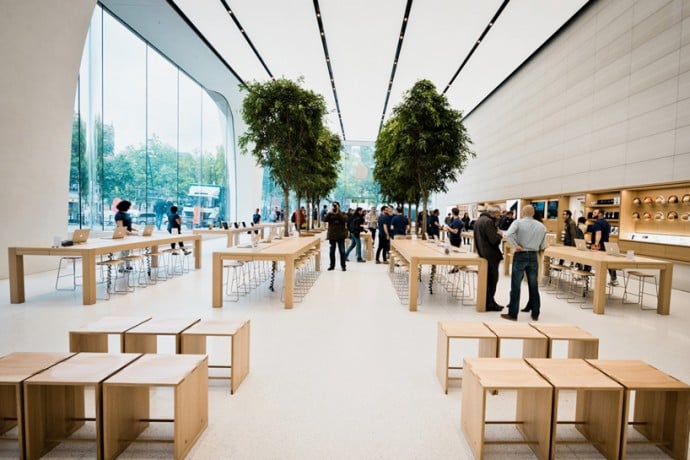 Using the traditional themes of high ceilings, plenty of glass and wooden display structures, the Brussels store, located at the Avenue de la Toison d’Or, is just as much an icon as any of the others if not more so. Eight rather large trees planted in giant white pots have been used in the central area and form a promenade of sorts but also add the much needed greenery to the well light store. Light tones, glass facades, wooden benches light boxes that extend through the length of the ceiling and generally a spacious motif form the premise of the premises. 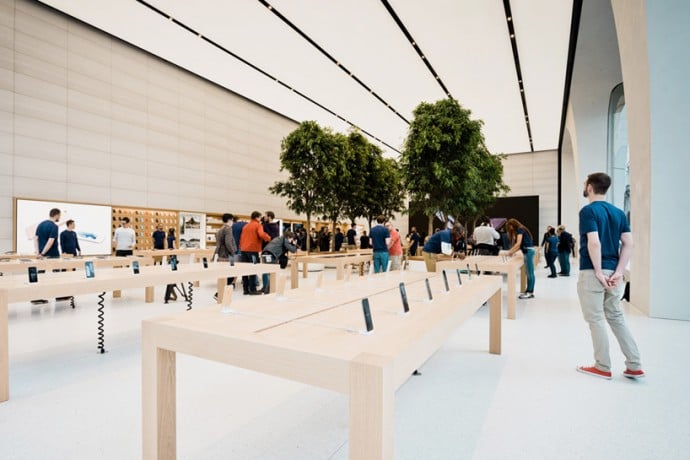 Neatly and strategically aligned Sequoia wood tables are set about to display laptops, phones and tablets; accessories are showcased along the longer wall of the store inside a case and wooden draws have been specially designed to house the latest Apple device i.e. the Apple Watch that is also, incidentally, being launched here for the country at the Brussels store. Ive has also positioned a large display at the end of the showroom that will showcase all of Apple’s latest and greatest offerings to eager and potential customers.

The store exudes a sense of space in a classy formation with enough room for staff and customers to mingle, test, experience and shop for any and all Apple devices. So if you happen to be in that part of Europe you might want to stop by and see what the fuss is all about, maybe you’ll even get to meet the designer himself.