Montblanc recently launched their Great Characters Limited Edition James Dean pen collection in India. In a gala event at the Conrad Bengaluru the luxury maison showcased the limited edition writing instruments which pay homage to the undisputed but short lived star of the ‘golden age of cinema. We sat down with Franck Juhel, President of Montblanc Middle East, India and Africa to talk more on the newly launches collections and the brand’s plans for India.

Luxurylaunches – It’s been 10 years since the Great Characters collection first launched. How has the response been?
Franck Juhel – We launched our Montblanc Great Characters Special Edition collection in 2009, and have been paying homage every year to an exceptional individual whose life and work has made a lasting impact on human civilization. These have included a wide assortment of people – from cultural icons to great thinkers and leaders – and all have been highly collected editions. What has been interesting is the level of anticipation and speculation by our collectors on who the character will be each year.

Anything special for the 10th anniversary?
Every year is a special year – and this year we celebrate the cultural legacy of James Dean, one of the biggest Hollywood screen stars of his time. Despite his early death at the age of 24, and with just three films to his name, his talent and charisma earned him a place in cinematic history. So great was his impact that he was also awarded an Oscar posthumously – for two of his starring performances. The design of the Montblanc Great Characters Limited Edition James Dean™ narrates the story of the rebellious and unconventional hero who still captures imaginations with the authenticity of his acting and his compelling character nearly 65 years after his death.

Isn’t James Dean the youngest to be part of the Great Characters?
Yes, you’re correct. He was only 24 when he died and yet had such a far-reaching impact in the short time of his life. 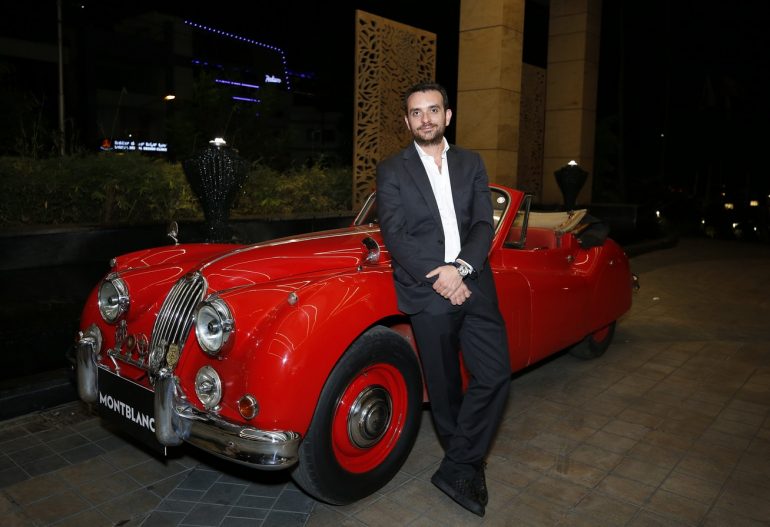 Can you tell me more about this collection?
As with all our Great Characters collections, the true magic comes from the details that our historians have identified about the characters’ lives, and that our craftsmen have then articulated in the design of the writing instruments. There are three core pieces in the Montblanc Great Characters James Dean™ collection. The Special Edition, available as a fountain pen, rollerball and ballpoint pen, is crafted in red precious resin and recalls the vibrant colour of James Dean’s red jacket worn in his second film Rebel without a Cause – one of the first Technicolor productions. Both cap and barrel bear a pattern that evokes the structure of jeans – a garment most often worn by James Dean in his films, while an inlay on the cap is inspired by the shape of a bullet, and the ruthenium-coated clip a gun, both of which he used in his third and last film, Giant.

The Limited Edition 99, of which only 99 pieces have been crafted, references the year 1999 when James Dean was posthumously awarded an Oscar, and is inspired by his outstanding contribution to cinema. Quite spectacular both aesthetically and functionally, the writing instrument is knife-shaped in design, a tribute to the knife fight in Rebel without a Cause. The pen’s barrel is crafted from precious ebony with fittings made of Au 750 solid white gold, but the element that provides collectors with the most delight is the special mechanism that hides the nib within the writing instrument – just like the blade in a switchblade, it is released with a simple flick of a switch to be automatically ready for writing.

Finally, the Limited Edition 1931, with a total of just 1,931 fountain pens and 1,931 rollerballs in reference to the year James Dean was born, celebrates his passion for fast cars, and his Porsche 550 Spyder in particular. The barrel is crafted in Ag 925 sterling silver and engraved with a pattern reminiscent of the car’s oil-cool grille, while the Au 750 solid gold, rhodium-coated nib features a race flag design. The cap of the pen references two James Dean movies: the cap made of precious wood, bears the gun-shaped clip inspired by the weapon he used in Giant, while the cap top is decorated with the East of Eden US dollar bill motif.

How has the previous collection been received in India?
Last year’s Great Characters Edition has been a sell-out success, not just in India, but globally. Of course that should be no surprise – it was The Beatles Special Collection!

What are the brand plans for 2019?
This year is a dynamic one for Montblanc as we broaden our leadership and positioning as the Maison for today’s luxury business lifestyle. We continue to present new products in each of our categories, and have a number of exciting launches scheduled through the year. Expect to see products that integrate with today’s urban lifestyle, marrying innovative functionality with elegant, timeless design that is uncompromising in quality. We also continue to deliver the ultimate in craftsmanship in our high artistry collections – in both timepieces and writing instruments – so expect to see a number of exceptional new pieces this year.