Being born in the eighties, I have pretty much soaked up a lot of the pop culture life. Considering how culturally diverse that period was, the fifties and the sixties prove to be even more fascinating to explore. And if you think alike, but would rather explore those golden times with some luxury malt instead, then Macallan and the ‘godfather’ of British pop art Sir Peter Blake have just the right package for you. As the octogenarian celebrates his 80th birthday on 25th June, he has decided to let the world in on the celebration of his exciting life with a unique limited edition art piece nestled inside a stunning oak box. The box has been divided into eight sections, each representing a decade “inspired or chosen by Sir Peter Blake.” Each section contains a miniature of The Macallan distilled in that decade (1930 through to 2000s), sporting labels designed by Sir Peter along with a small book of illustrations and on his life. The set will be limited to 250 units, priced at £4,500 ($7,000).

Here is what you can expect in the box.
First up is one of 12 bottles (the first in fact) of the Macallan 1926, bottled back in 1986. For this malt, Sir Peter teamed up with art director David Holmes, who designed the earliest Macallan advertising campaign. Other rare malts are dated from 1937; 1949; 1952; 1969; 1976; 1989; 1997; ending at 2002.
The artifacts in the box, sourced by art director Stuart Newman represent water, fire, air, and earth so that they aid the process of whisky making. The list of artifacts, classified by the years as mentioned in the press release, are as under:
The 1930s
Black and white image of distillery workers at The Macallan
Fire bucket – representing water and fire
Dancing tin duck – a replica of one of Sir Peter’s favorite’s from his own collection
The 1940s
Windproof matches
Tin damsel fly – still very much alive on Speyside
Small bottle with a painting of the Queen Mary, one of the first pieces of art Sir Peter Blake bought as a student in the late forties
Wellington boots – representing an original pair of Tom Thumb boots that Sir Peter has in his collection and one of his favorites.
The 1950s
She-Devil painting on the cover of the book
Halfpenny
The 1960s
CD with the cover of Beatles painting by Sir Peter Blake – – including an old advertisement created by DH and a film by Phil Sansom on the making of the Blake @ LXXX box
The 1970s
Teapot and roses painting – adding flowers to the bold and colorful design
The 1980s
Robin painting – to provide some natural life
Gnome fishing (on the Spey!)or with a garden spade.
Spey Salmon – representing the fishing on the Macallan’s Easter Elchies Estate
The 1990s
Extract from book – W for Whisky The collage is very typical of SPB’s style
Macallan cask – representing the importance of the oak casks in the making of The Macallan
The 2000s
Porcelain mouse – representing the computer age. 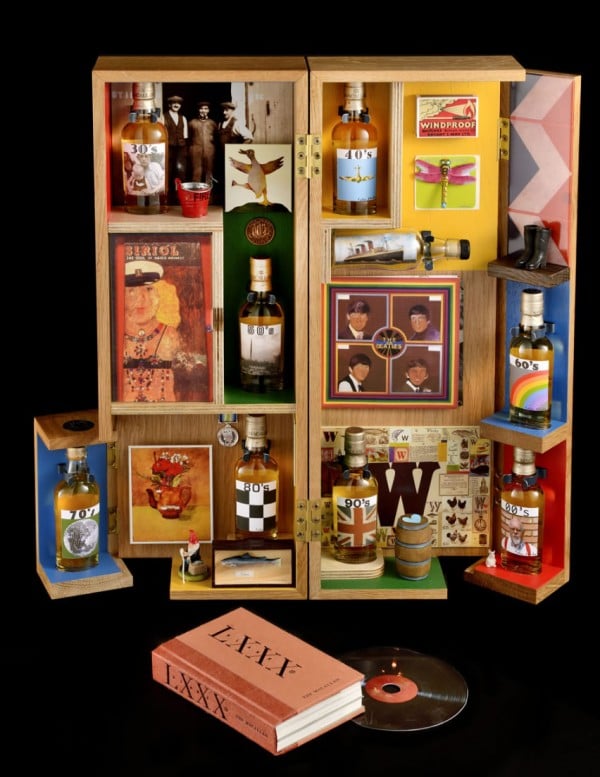