Record-breaking 44 million tourists saunter their way into the Big Apple making it richer by $24 billion in 2006. Be a part of a record in the making as totter through the holiday hordes in Times Square between Christmas and New Year’s. The total surpassed the city’s projection by a million, said a statement released by the office of Mayor Michael Bloomberg. Visitors in 2006 included seven million from other countries, according to NYC & Co., which promotes and markets New York attractions. The international visitors included 1.2 million from Britain. Tourism is said to support nearly 350,000 jobs and generate $24 billion annually for New York, which is why Bloomberg is pushing to attract millions of more tourists. He hopes for New York to draw 50 million annual visitors by 2015. GOOD LUCK MAYOR! 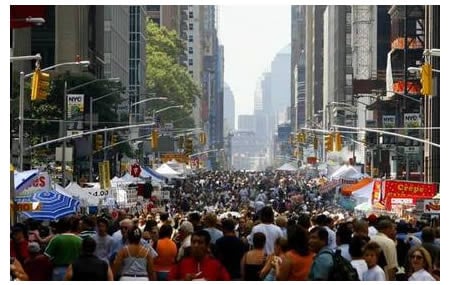 International tourists are drawn to the United States because the weak dollar makes for shopping and entertainment bargains. In particular, there has been a surge in visitors from Ireland, Spain, Italy, and the United Kingdom. But U.S. Travel and Tourism Advisory Board feels that more should be done to woo them and other foreign travelers. To help get there, the city is beginning an overseas marketing campaign offering various hotel and airline discounts for foreign travelers during traditionally slower periods. Las Vegas, another top U.S. tourist draw, also expects to break records and surpass 38.7 million visitors this year, according to its convention and visitors authority. Hail U.S.!