If you live with lots of greenery in your vaults (got it?) then you’d love to spare a bit of it to name a new species of Mexican butterfly. Just about $50,000 is needed to christen the 4-inch butterfly that lives in Sonora, a Mexican state bordering Arizona. The money will also fund two more years of research on it. At least that’s what researchers who helped discover (presently called) the “owl eye” butterfly are hoping for from an auction on the Internet auction site Igavel.com. The butterfly discovered by Warren and researcher George Austin ranges as far north as Magdalena de Kino, about 120 miles south of Tucson, and is known to live in the area along Highway 16 west from Yecora, near the Chihuahuan border, to near Hermosillo. 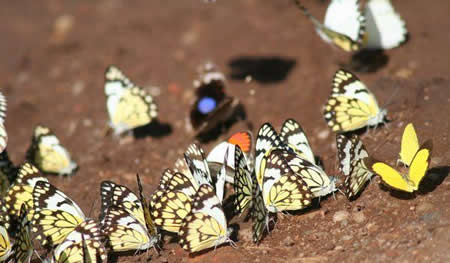 (The images are for representational purpose only.)

Warren said the amount being sought for the butterfly isn’t out of the question, noting that naming rights for a new monkey species brought in 650,000 dollars two years ago. A group of 10 new fish species that went on the naming auction block at the same time earlier this year brought in a total of 2 million dollars. And you believed that money can only buy gadgets, jewelry, estates, and such materialistic pleasures?
Source