Everyone wants to get as close to President Barack Obama as possible. Well, now you have a chance to live right next to Obama’s. How? The house right next to Obama’s Chicago residence is up for sale. Owners Bill and Jacky Grimshaw have put the beautiful home in Chicago’s Kenwood neighborhood for sale. The 557 square meters house has 17 lovely rooms. The magnificent house at 5040 South Greenwood Avenue was built in 1906 by A.R. Clark, the original owner of Obama’s house at 5046 South Greenwood. The owners have lived in the house since 1973 and have even known the First family for years. What is more, during the Iowa Primary in 2007, the upstart Obama Campaign filmed a Christmas “from our family to yours” television commercial in front of this home’s living room fireplace.

No price tag has been finalized yet but the owners are hopeful they will find the right buyer who is willing to live amid the tight security encampment thanks to their high profile neighbor. The Grimshaw’s are welcoming offers over the next six weeks. Prospective buyers will be required to go through a vetting process and tours of the house will be offered twice a week through early October. 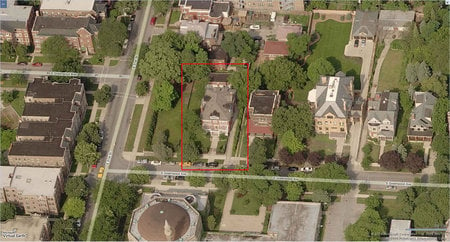 Tags from the story
Barack-Obama, Chicago