We have recently witnessed the tug of war over the title of the world’s fastest car between Bugatti Veyron and Hennessey with Hennessey Venom GT being crowned as the winner, as of date. In an attempt to avenge the move, Bugatti Veyron has dropped its top to zoom faster to set the world speed record for open-top production sports cars. Bugatti Veyron 16.4 Grand Sport Vitesse has already been boasted off as the fastest roadster in production. All set to be debut at the Shanghai Motor Show 2013, the Bugatti Grand Sport Vitesse hit the top speed of 408.84 km/h (254.04 mph) and is now officially the fastest roadster in the world. Chinese racing driver Anthony Liu attempted this record-breaking feat on a black and orange Vitesse at Volkswagen Group’s proving grounds in Ehra-Lessien. Collectors and deep-pocketed autophiles can rush to be the fastest to book this beast as only eight of the Bugatti Veyron 16.4 Grand Sport Vitesse World Record Car (WRC) Edition will be available for a worthy price of 1.99 million euros ($2.6 million). 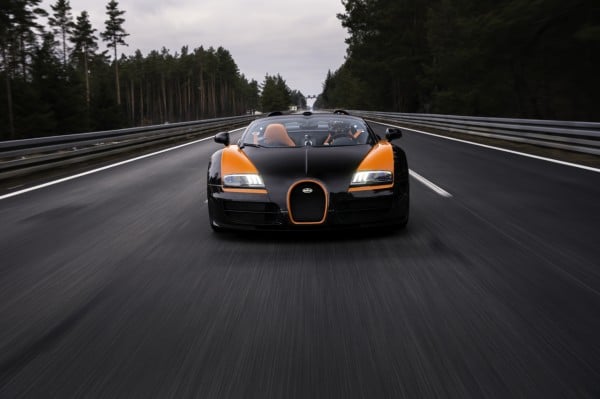 After setting the record, Liu quoted, “This was a very exciting moment. In our training sessions, we exceeded 400 km/h, but the fact that I could surpass this unbelievable speed once again and even higher has made me very proud. The car is, even at such high speeds, incredibly comfortable and stable. With an open-top, you can really experience the sound of the engine, and yet even at higher speeds, I did not get compromised by the wind at all.” 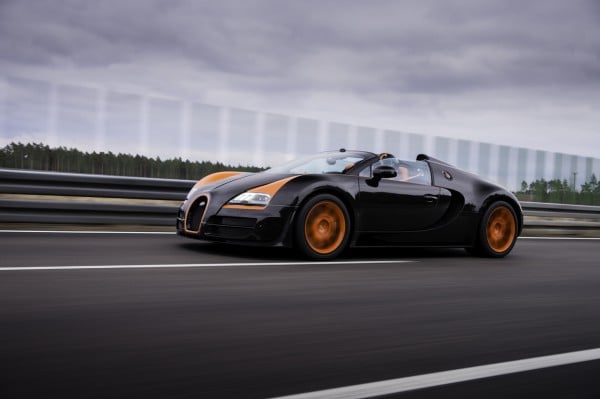 Press release states, ‘The Bugatti Veyron 16.4 Grand Sport Vitesse has been on the market since the spring of 2012. Its power comes from an 8-liter W16 engine, which pours 1,200 PS and a torque of 1,500 Nm at 3,000 to 5,000 rpm to the road. Its high-performance handling can be attributed to a racing chassis which, together with extremely fast-acting shock absorbers and reinforced anti-roll bars, guarantees exact control of both the four-wheel-drive system and the entire vehicle. Other factors that enable such performance at the upper limits include a standard carbon monocoque with high torsional rigidity and an outer shell made entirely of carbon fiber. Keeping wind noise and air turbulence to a minimum in the vehicle’s interior is a particular concern with open-top vehicles. In the Vitesse, a specially developed roof spoiler along with an intricately designed windbreak guarantees calm open-top driving; indeed, these were preconditions for reaching the record-breaking speed of 408.84 km/h.’ 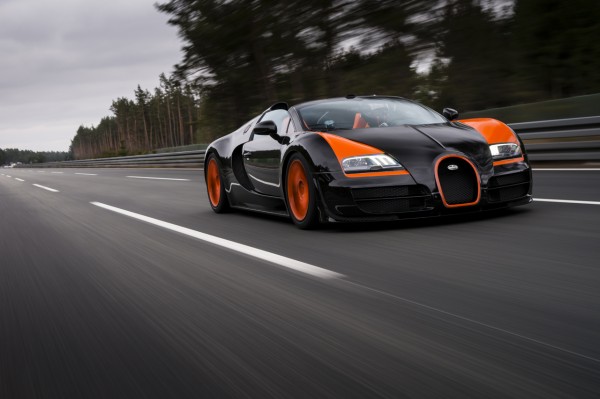 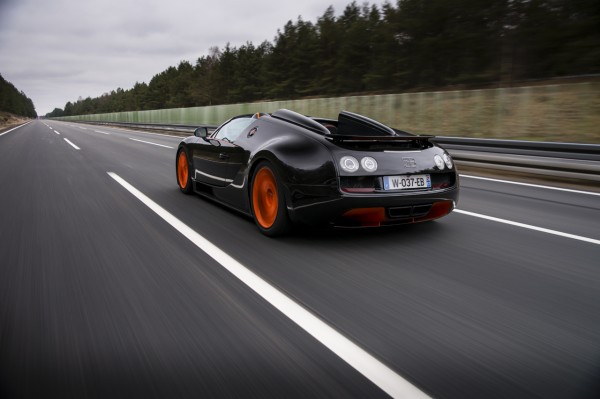 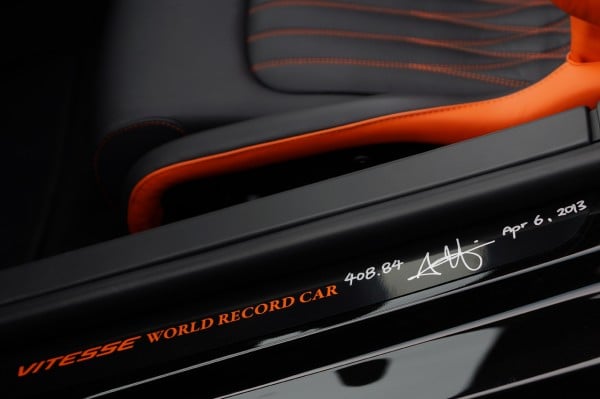 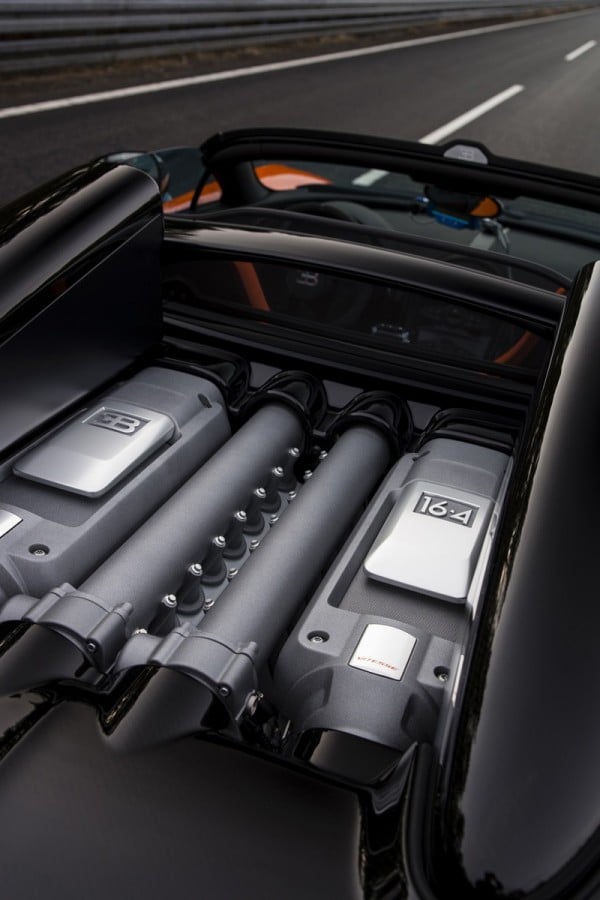 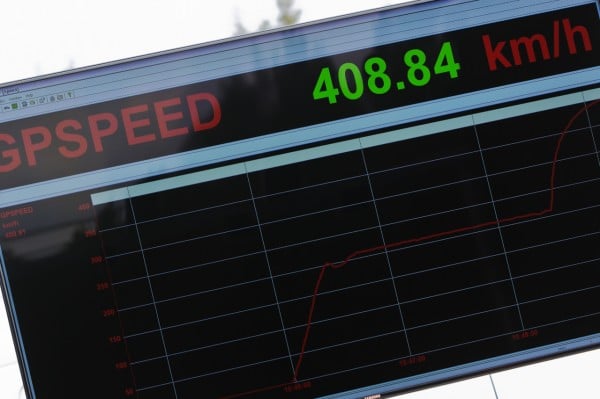 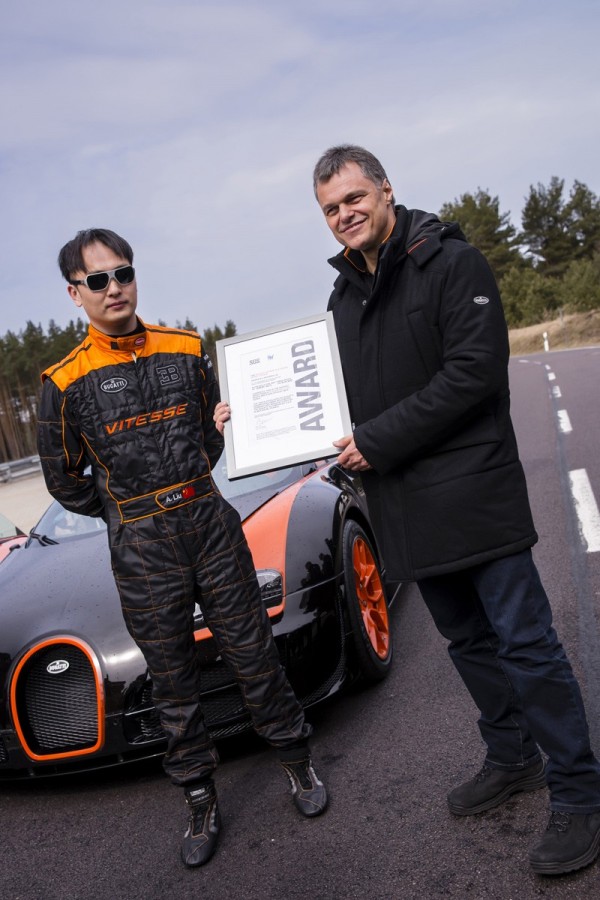