The Dodge Viper is a legend in its own right. Known to churn out blood-curling performance numbers and a distinct engine roar that has come to be recognized as one of the most distinct, the Viper has found its place in the daydreams of many. Now, Dodge is welcoming onboard yet another version of this car, the 2016 Dodge Viper ACR. From the spec-sheet, the car is anything but mild-mannered. Packed with an optional ACR Extreme Aero Package that enables the car to deliver the most downforce of any production vehicle, the Viper ACR is also as intimidating as its predecessors. Sporting an adjustable dual-element rear wing that’s a whopping 6-feet across, the car uses a bunch of dive planes to its advantage. A detachable front splitter extension along with removable hood louvers ensure this car stays grounded and stable. 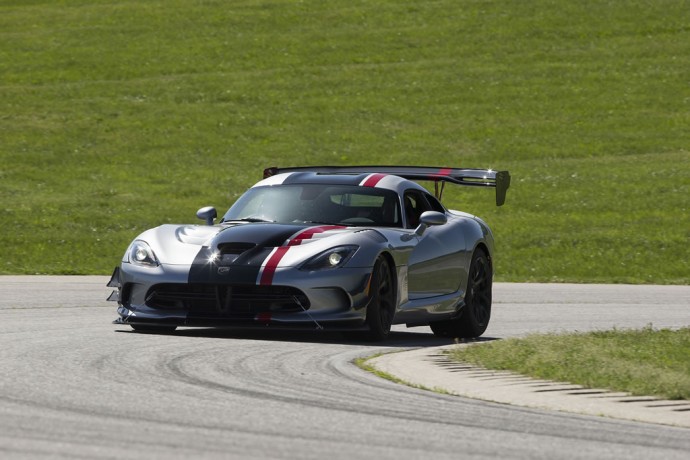 To slow down, the car sports ACR-exclusive carbon ceramic brakes measuring 15.4 inches up front and 14.2 in the rear. The car’s ABS is specially tuned to work alongside the grip and brakes. Beneath its hood, the Dodge Viper ACR sports an 8.4-liter V10 engine that produces 645 horses and 600 lb-ft of torque. Dodge also states that these are the highest numbers produced by a contemporary naturally-aspirated car. The ACR version of the 2016 Dodge Viper will be priced above the $87,000 at which the base model is priced.

Tags from the story
Dodge