The last couple of years have not been great for Lotus, which made the automaker cancel all its overtly ambitious plans. However, Lotus will arrive at this year’s Geneva Motor Show with new car that might change fortunes for the British marquee. Dubbed the Evora 400, Lotus is using the words ‘focused’ and ‘pure’ to describe the model, which they also want us to believe is all-new. Now let’s be frank, the Lotus Evora 400 isn’t a completely new sportscar but is the same model with new styling, an engine upgrade, and a reworked interior design. However, the Evora 400 is the fastest and most powerful production Lotus to date, clocking in with 400 hp and a top speed of 186 mph, which makes it special. 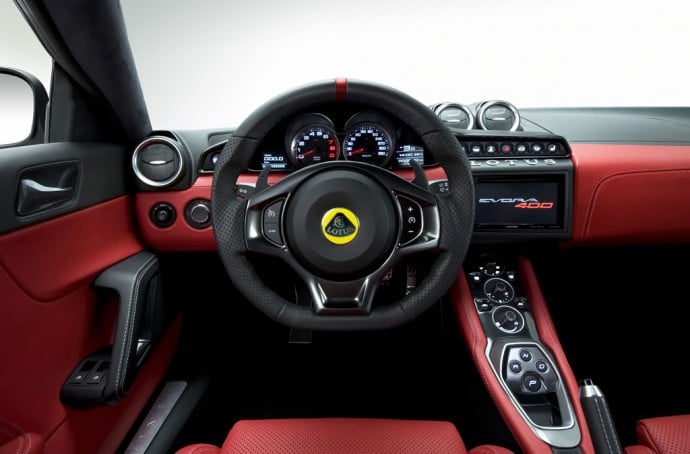 The same 3.5-liter Toyota-sourced V6 engine now comes with a new supercharger, a new exhaust, intake, and ECU tune that boost power to 400 hp. In addition to the jump of 55 hp, the torque is up as well, with 302 pound feet (from 295). This has helped the car shave off half-second from the 0-60 time, now down to 4.1 seconds. The engineers have also tweaked the electronics, re-adjusted the suspension, fitted a new aero kit for increased downforce and added a new limited slip differential. The company claims the new car will lap its 2.2mi test track in Hethel a full six seconds faster than the standard Evora. Production is slated to start in summer, and the Evora 400 will begin reaching European Lotus showrooms in August. There is no word on the pricing as of yet. This makes us wonder, can the new Lotus Evora 400 successfully rival the Porsche Cayman GT4. Well, only time will tell. Watch out for this space for more info and a complete coverage of the 2015 Geneva Motor Show