After we witnessed the Maybach 62S decked out in diamonds at Cannes last year, it’s time to see the coveted car swathed in precious gold, that’s right, successful entrepreneur and TV personality Theo Paphitis’ has recently been spotted in his brand new Maybach 62 kitted out in solid gold bullion, the exclusive pictures in which the car looks a brilliant golden yellow could make anyone go greedy over it. Apparently, not just the exterior is covered in gold; even the interior is shimmering with the precious metal right from the steering wheel, air-con vents, floor, seats, roof, indicator stalks, and even the screen on the sat-nav. The chauffeur driving this car around for his boss must be feeling like the most privileged chauffeur in the entire world, I reckon!

Every sunshine comes with a bit of a dark cloud. That is something to say for the sluggish speed of 47 miles per hour and a capacity of 3 miles to the gallon for this gold-covered car. Considering the current gold prices, it must have cost Mr. Paphitis a whopping £35m ($56.9m) to cover his $1,350 550 in solid gold. But he is worth more than just flashy cars as he donates generously to the Theo Paphitis Charitable Trust. So it would be fair to say that a man with a heart of gold rides in a car of gold. A genuine Midas touch, eh? 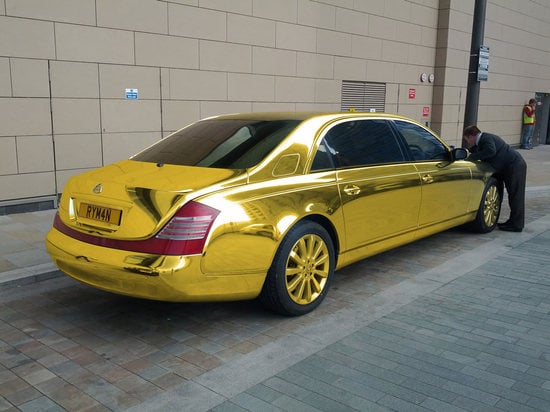