The pandemic has proved to be quite the leveler. For the average watch-lover who thumbs through their cellphone screen, zooming into images of case backs to see the complications and marvel at what it could be, it has surely done its share of leveling. Watches & Wonders 2021 has gone digital and has democratized the exposure of some of the best timepieces known to man, giving our protagonist the same visibility that plaid-suited gentlemen with a penchant for vanity and heavy pockets have enjoyed for years.

This year’s event did see some beautiful timepieces come forth, but innovation and obsessive technology, not so much. We believe that the pandemic has made everyone more reflective. We now look at commodities and measure if they’re essential for our existence and offer the best utility, and that could be driving purchase decisions. Cosmetics haven’t been subtle though. There are some great-looking timepieces to meet the desire of every wrist. The big guns truly showed up, with Rolex, Patek Phillipe, and Hermes joining nearly three dozen manufacturers who have inspired the horological society of the world. Here are our picks of the best eight that shone through: 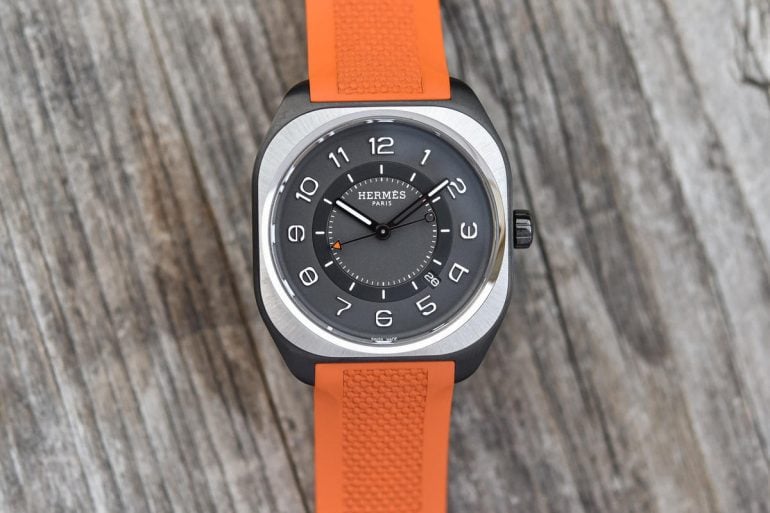 Hermès H08- $8,900
Visibly masculine, the Hermès H08 was unveiled in three case configurations – Graphene composite, DLC-coated titanium, and satin-brushed titanium. The brand has played out the combinations of 39mm cases and straps smartly enough to attract a wider base, but the use of the watch is intended to be regular use. The hour markers are thick and visible, with Super LumiNova applied on them. The mechanical, self-winding watch is powered by the Hermès Manufacture Caliber H1837 movement and is water-resistant up to 100 meters. What we loved best about the watch is the inner ring with hour-markers that is concentrically situated within the main dial, and the second’s hand that is deliberately shortened to reach these markers only. It’s so subtly chaotic that it’s novel.

Rolex Explorer – $6,450
You’re right, we couldn’t contain ourselves enough and mentioned the excellent Rolex Explorer right at the beginning of this list because we had not one, but two of them. The Explorer has been one of the most endeared watches from the crown and seeing two avatars in 36mm is irrationally exciting. It’s the first time in the history of the range that an Explorer is available in two tones, the other sitting comfortably in Oystersteel. There’s ample history behind the 36mm case size of the famous 3-6-9 watch. This was the same case size that was launched to honor the 1953 maiden expedition of Mount Everest by Sir Edmund Hillary and Tenzing Norgay. 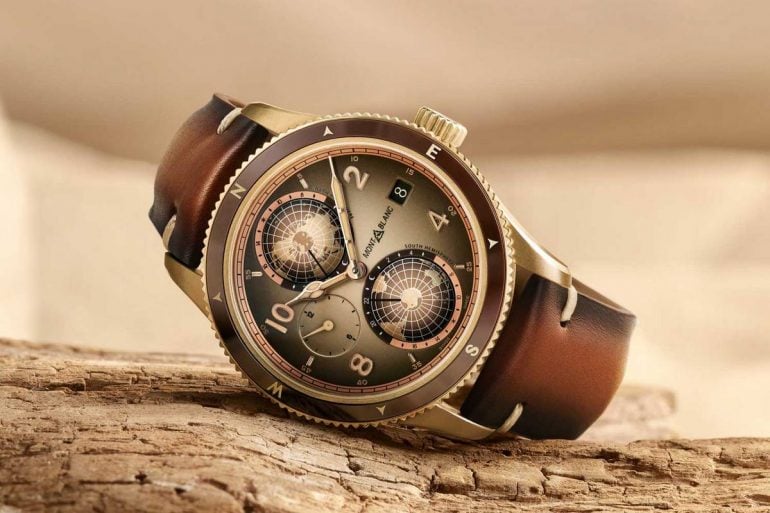 Montblanc 1858 Gobi Edition – $6,100
Here’s one you would want on your wrist when you find yourself marooned in a desert. The Montblanc 1858 Geosphere has donned the colors and shades of the desert and comes equipped to get you past the endless dunes. The pair of split hemispheres display the time of any place in the world, as you set it. It has a window for the date at 3 o’clock with the logo in tow, and a 12-hour second time-zone display at 9 o’clock. Our favorite feature was the bezel that can be used as a compass and is beautifully made with brown ceramic. The illustration on the case back takes you to the sharp cliffs of the Gobi Desert. It runs on the caliber MB 29.25 movement with Manufacture world-time complication that is certified by the Montblanc Laboratory Test 500. 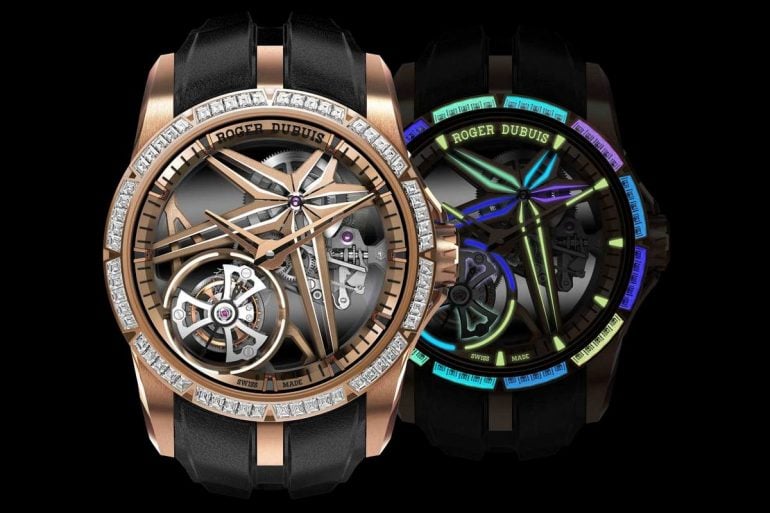 Roger Dubuis Excalibur – $184,300
When we last saw the Roger Dubuis Excalibur Single Flying Tourbillon, we didn’t expect that it would have such a radical transformation in a subsequent model. But it’s 2021 and we have learned better than to expect what we expect. While it retains its hallmark star-shaped bridges on the open dial, these 42mm renditions have changed a fair bit. Most notably, the ‘Glow Me Up!’ subvariant steals the limelight with 60 baguette-cut diamonds on the bezel and other edges, each with luminous material in a variety of hues that make it glow like a Tokyo street sign. It is also available in EON Gold, White Gold, and DLC Titanium case options. All of these are employ the RD5125 movement, which is manually wound. 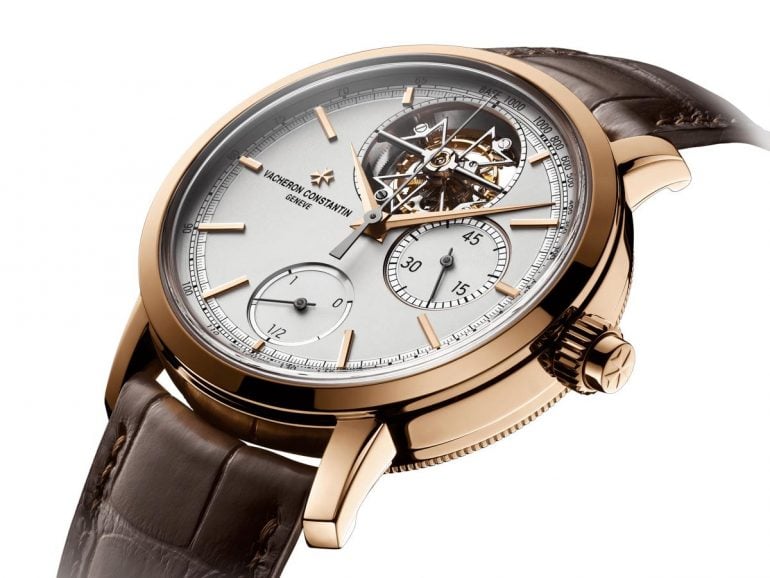 Vacheron Constantin Traditionnelle Chronograph – $97,000
Ultra-thin and with the neatest dial of them all, is the Vacheron Constantin Traditionnelle Split-Seconds Chronograph. It bears its unique characteristics such as the rattrapante (catch-up) chronograph, the monopusher, split-seconds design, and the caliber 3500 movement that reminisces the Harmony Grande Ultra-Thin Chronograph. This classical-themed watch is part of the Collection Excellence Platine (CEP) edition and sports a solid platinum dial. The movement is incredibly thin at 5.2mm. The dial is elegantly balanced with a chronograph, a 60-minute timer at 3 o’clock, the small seconds at 9 o’clock, and the power reserve indicator at 6 o’clock. 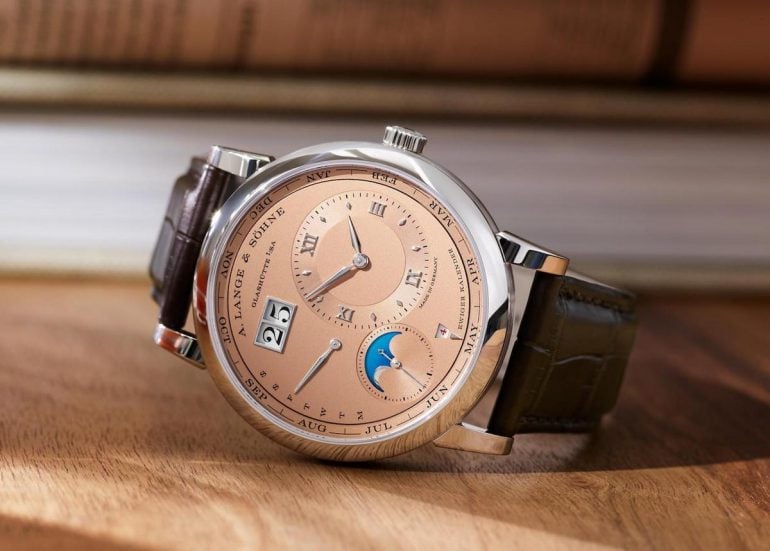 A. Lange & Söhne Lange 1 Perpetual Calendar – $116,000
There’s something sensorial about Lange 1 Perpetual Calendars. They seem so perfect to the OCD-stricken and yet are persistently off-center. The Lange 1 Perpetual Calendar that showed up at Watches & Wonder 2021 is no exception, bringing with it the grace and sophistication that places it many rungs higher than other perpetual calendars in its league. Measuring just under 42mm and just over 12mm thick and bears the rose gold and grey combination that has made the timepieces of Lange easily recognizable. It is powered by the caliber L021.3 movement and has a 50-hour power reserve. The moon phase, the large date window, the months on the outer ring, and the seconds sub-dial make up the dial. 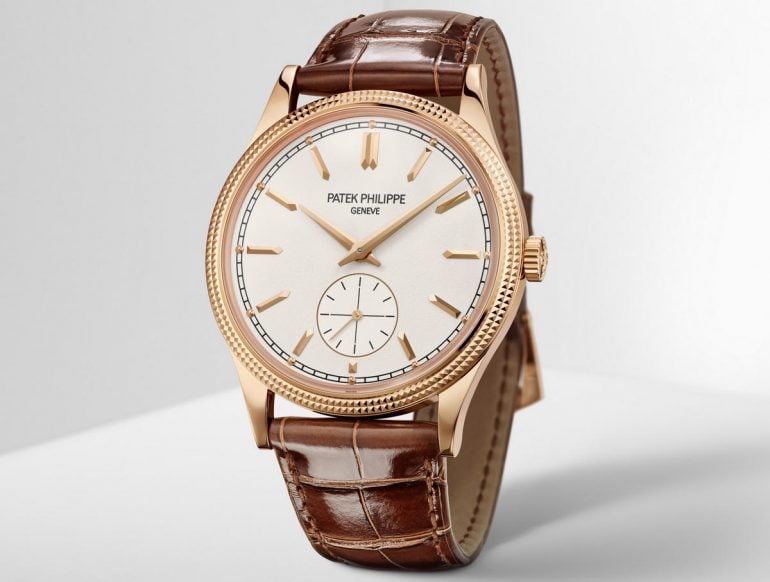 Patek Phillipe Calatrava “Clous De Paris”- $29,570
We couldn’t possibly compile this list without a shoutout to a Patek Phillipe. The giants of horology have refreshed the Calatrava and launched it as Ref. 6119. It is now bigger at 39mm and is powered by the twin-barrel 30-255 PS movement, which has just been revealed. Thanks to this, the watch has now extended its power reserve to an impressive 65 hours. Another Calatrava throwback is manifested in the “Clous De Paris” guillochéd hobnail bezel. The rare gems of Patek Phillipe under this line includes a Rose Gold and White Gold, both with alligator straps and 30-meters of water resistance. The new Calatrava runs on the caliber Patek Philippe caliber 30-255 PS movement. 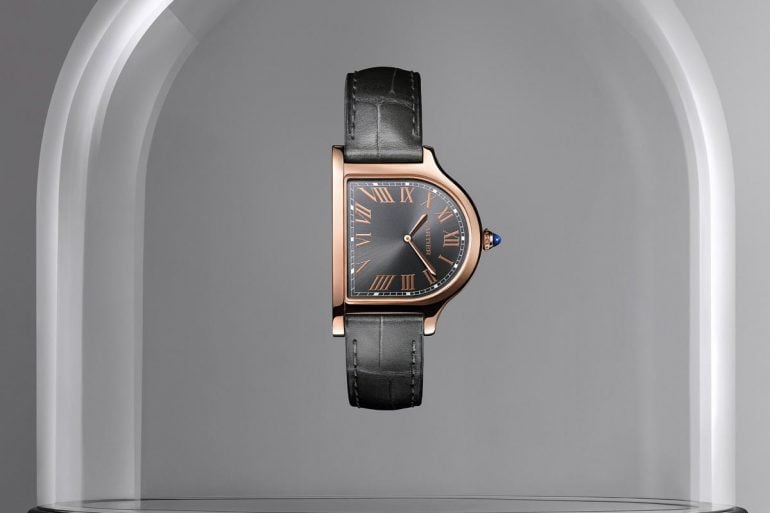 Cloche de Cartier – $31,100
A bell-shaped watch would drive newly-inducted horologists insane, but Cartier has been defying the conventions of case designs for decades, with male jewelry-inspired designs. The 2021 Cloche de Cartier is shaped like a cloche (French for bell). It is available in Rose Gold, Yellow Gold, and Platinum. The shape was first experienced in the 1920s and one wouldn’t miss the noticeable sapphire cabochon on the crown of the gold variants or the ruby on the crown of the platinum one. It contains a hand-wound, 2.9mm thick caliber 1917 movement, which has a 36-hour power reserve.