It was back in 2004 when Jaeger-LeCoultre first introduced the Gyrotourbillon timepiece Over the last fifteen years, the watchmaker has revealed several iterations and subsequent generations of the watch, including the Master Grande Tradition Gyrotourbillon 3 that came out in 2013 to mark the Maison’s 180th anniversary. For 2019, Jaeger-LeCoultre has unveiled a new version based on the third-generation interpretation of the Gyrotourbillon which combines its mechanical sophistication with the beauty of fired enamel, meteorite, and aventurine. The third generation of the Gyrotourbillon is its most complicated version; the timepiece combines double-axis tourbillon with a single-button chronograph with digital, instantaneous 60-minute counter as well as a day and night display. However, Jaeger‑LeCoultre wanted to make the timepiece even more special and made use of the exceptional skills of its artisans and dressed the timepiece with the rare traditional arts of hand-guillochage, engraving and grand feu enamel. 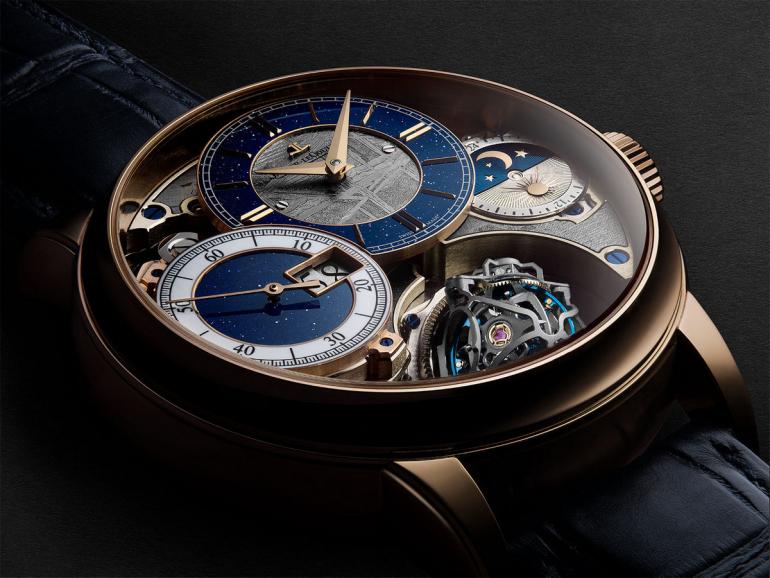 The sub-dial for the time at 12 o’clock features a meteorite inlay ringed by an aventurine glass chapter ring. In addition to that, meteorite panels are inlaid on the movement bridges on the front, as well as on the back. It was sourced from the Gibeon meteorite found in Namibia. The meteorite has an iron-nickel alloy with an octahedrite crystal structure, formed by the cooling of the asteroid fragment in outer space over the course of billions of years before it crashed to earth in prehistoric times. The distinctive streaky Widmanstätten pattern is accentuated for the watch by polishing and etching with acid. An aventurine disc is encircled by a ring of white grand feu enamel on the chronograph display, marked with elapsed seconds. The Day/Night display comprises a 24-hour plate on which two gold semi-circles are applied, one each for day and night. The white day section is decorated with hand-guilloché, hand-engraved sunrays and an applied polished pink gold sun; the night section features applied polished pink gold crescent moon and stars, set on a rich blue background. The Master Grande Tradition Gyrotourbillon 3 Meteorite is limited to just eight examples and is priced at an equivalent of $550,000 USD. 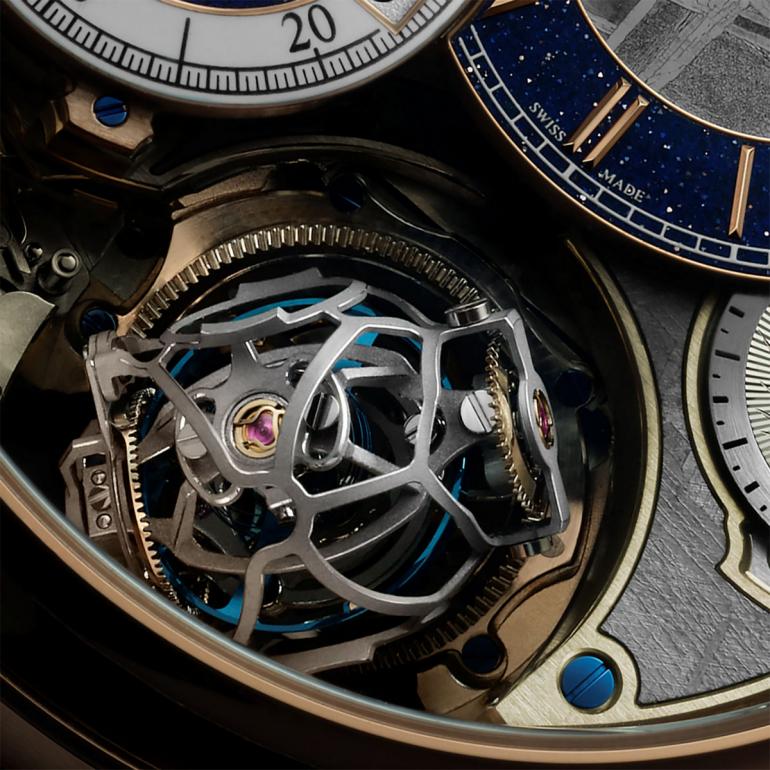