Watchmaker Jaquet Droz is celebrating its 280th anniversary this year. Along with the one-of-a-kind Parrot Repeater pocket watch showcased at Baselworld 2018 to mark the occasion, the La Chaux-de-Fonds-based manufacture has released a new, modern interpretation of the Grande Seconde – the brand’s signature model. For the first time in history, the Grande Seconde is being made as a skeletonized piece. Called the Grande Seconde Skelet-One, the new iteration while maintaining the traditional elements of the Grande Seconde takes a completely new design direction with its sub-dials made out of thin sheets of sapphire and dramatically skeletonized movement. 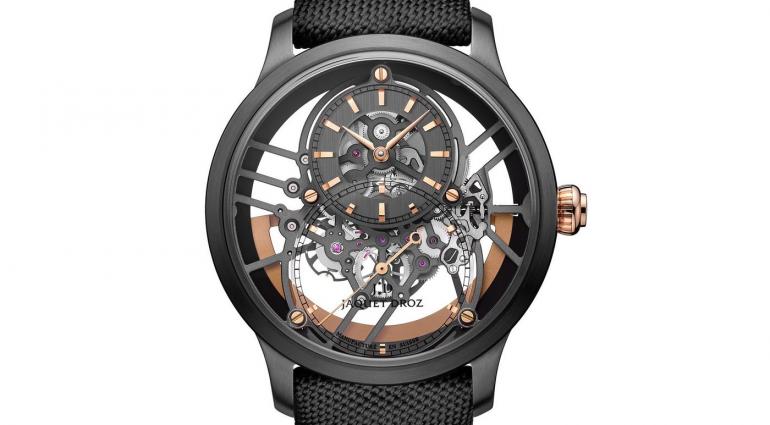 Preserving the watch’s signature asymmetric figure of eight dial, the openwork movement offers an unobstructed view of what’s going on behind the scenes. The large seconds sub-dial made out of sapphire crystal goes beautifully with the skeletonized theme of the watch; however, legibility might be an issue here. Powering the Jaquet Droz Grande Seconde Skelet-One is automatic caliber JD2663.SQ, and the bridges of the movement have been given a dark grey treatment to add contrast to the watch. The twin-barrel movement is entirely openworked, and the gold central rotor is also skeletonized along with being engraved with the individual number. Jaquet Droz has released three versions of the Skelet-One: ceramic with red gold accents, red gold, and white gold. The case measures 41mm x 12.30 mm for the gold versions and is slightly larger for the ceramic version at 41.5mm x 12.48 mm. The watch is paired with a black alligator strap with a pin buckle for the gold version and a fabric strap with a folding buckle for the ceramic version. The Gold Grande Seconde Skelet-One is priced at CHF 34,600 (approx. US$36,000) and the ceramic version costs CHF 24,850 (about US$26,000).

Tags from the story
BaselWorld-2018, Jaquet-Droz