Have you seen the breathtaking Sakura diamond? Not too long ago, we featured the magnificent jewel, a 15.81 carat, fancy, vivid, purple-pink internally flawless type lla diamond ring with an estimate of nearly $25million. The ‘Sakura’ (Japanese word for cherry blossom) is a massive diamond set on a platinum and gold ring. It has now officially turned into the largest purple-pink diamond ever to be auctioned, selling for $29.3 million in Hong Kong. The one-of-a-kind stunner was naturally and undoubtedly the crown jewel of Christie’s Magnificent Jewels auction in Hong Kong on May 23.

Natural pink diamonds are a rare entity and sizeable ones even more at that. Christie’s claims that fewer than 10 percent of pink diamonds weigh more than one-fifth of a carat. The Sakura’s is nearly 80 times that at an unprecedented 15.81 carats. While the Sakura attracts attention owing to its size, the gorgeous diamond is also coveted for its color and clarity. Graded as internally flawless, the Sakura boasts exceptional optical transparency instead of commonly found slightly included and hazy pink diamonds.

Vickie Sek, chairman of jewelry at Christie’s Asia Pacific, said in a statement, “This exceptionally rare and magnificent wonder of nature represents a unique expression of identity and mesmerizing beauty through its enthralling purple-pink hue that will undoubtedly capture the hearts of discerning connoisseurs and collectors worldwide.” 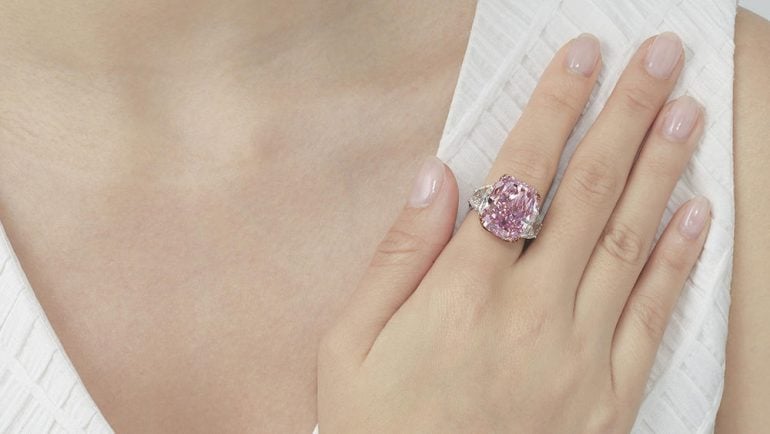