Pop singer Lady Gaga is hardly known for her demure style of dressing, which is why we weren’t surprised to see the Mother Monster step out in an outlandish ensemble. The 28-year-old star who has worn everything from flying dress to the meat dress has managed to out-do even her most ridiculous outfits when she showed up at ‘VIP Room’ Parisian club wearing an inflatable metallic sea urchin costume. Gaga appeared uncomfortable as she struggled to move in her spikey silver outfit designed by Jack Irving, a 21-year-old British costume designer, and later decided to deflate her dress, stripping down to a seashell bra, floral panties and fishnets to cover her modesty.

The American singer was at the Bercy Arenato to perform the final stop of her six-month ArtRAVE: The ARTPOP Ball World Tour. This was the fourth headlining concert tour by Lady Gaga. 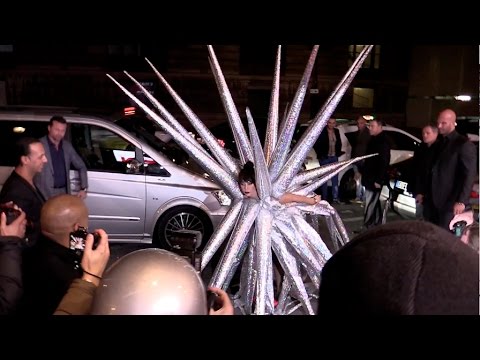 Tags from the story
Lady-Gaga