As you walk in through the revolving doors of the New Oberoi Mumbai the beautiful flower arrangement takes centre stage. The lift takes you to the lobby level where the first impression is the openness and the feeling of space. The huge French windows give an uninterrupted view of the Arabian Sea and the red piano that stands by the windows certainly makes a statement. As you cross the lobby with its sculptures and artworks, you will find yourself at the Fenix. The charm of this restaurant is the open concept where there is no door to walk through to enter the Fenix. Artistically designed you get the feeling of privacy when seated on your table and at the same time feel part of the action that is going on in the lobby. 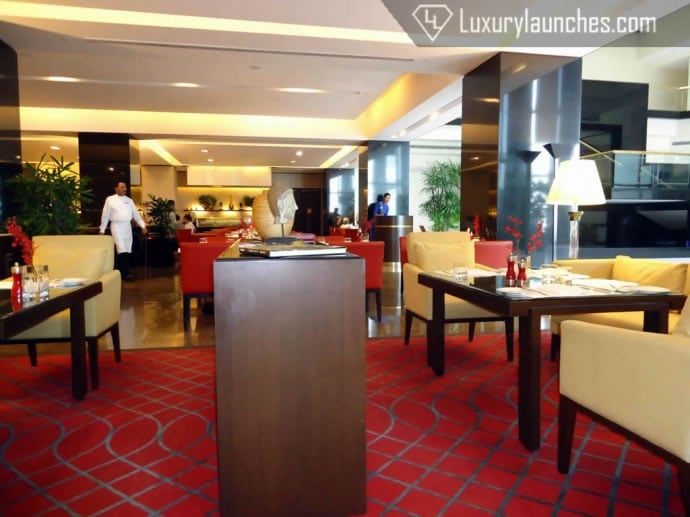 Ambience
Being invited to lunch at the Fenix, we were warmly welcomed and seated at a quiet corner table. Sleek and neat lines accentuated the furniture and the red upholstery stands out in contrast to the muted colors around. With the bar tucked away in the right hand corner and the Japanese counter to its side the restaurant just feels really spacious. They can accommodate 86 covers at a time which goes down to about 72 covers during the Sunday brunch as the buffet spread seems never ending.

We were handed the menu, the cover of which was covered with bold brush strokes of warm colours, with a simple but eye-catching Fenix written in black. One look at the menu had us reeling as they offer varied cuisines and unlimited choices of dishes. Appetizers, salads, soups, Western main course, pastas & risottos, Oriental main course, pizzas, burgers, sandwiches, Japanese and Indian main course were the headings under which the menu was divided. Thankfully the chef had prepared a tasting menu for us with his signature dishes and a few preparations from each cuisine to get a taste of what Fenix offers.

With the varied menu offered, there is something for everyone, something to tickle everyone’s taste buds.

The wine list was equally impressive and while we were offered a classic red wine chose to settle for freshly squeezed orange juice instead.

ALSO READ -   Review: A French Fiesta with Guest Chef Raphael Szurek at Mezzo Mezzo
The meal
Then started our meal where we were offered dish after dish lovingly prepared and proudly presented. The vegetarian starter was a salad of microgreens with walnut dressing, bay fennel, sun-dried tomatoes and pea shoots. The healthiest option on the menu where they geminate the seeds in house which are cut when they sprout and they are mixed into a salad. The non vegetarian starter was a soft shelled crab that was deliciously prepared. The next course we were served was a sushi platter. The tuna sushi was absolutely lip smacking and the vegetarian sushi was made with raspberry rice and topped with a dollop of beetroot mayo. It had a tinge of sweetness because of the raspberry and it gave a delicious taste to it. The chefs are constantly innovating to come up with different dishes and different combinations. To get a taste of the Italian preparation we were served tagliatelle pasta in a pesto sauce topped with pine nuts.

The highlight of the lunch were the Indian dishes. Served in an authentic Indian thali with all the condiments along with it, the feast was fit for a king.

The vegetarian thali had paneer tikka, a kathi roll, three vegetables namely a paneer with tomato gravy, spinach garlic and potato, yellow tadka dal, curds, rice, chutney, papad, kachumbar, pickle, served with an assortment of Indian breads. The non vegetarian thali were served with two of their star dishes- Roganghosh, which was a lamb curry spiced with Kashmiri red chillies and the Goan fish curry, which was the Betki cooked in red chilli and coconut curry. Gurmeet Bhatia, the head chef at Fenix spoke to us about about his signature dishes and informed us that the lamb for the preparations was sourced from Jaipur. With confidence and pride in his voice he says “ All the lamb and fish dishes at the Fenix are excellent, the best amongst all the Oberoi kitchens and this is not something that I say but this what the management believes and what my patrons vouch for.” Absolutely stuffed after all that sampling we swore we could eat no more, but this lasted only till the dessert got on the table. Warm chocolate fondant served with cocoa bean ice-cream and the chefs favorite -Texture of chocolate which was a caramelized hazelnut with butter scotch sauce. With a weakness for chocolates there was no resisting this. The warm chocolate oozing out of the fondant and just melting in our mouths transported us to seventh heaven. After a scrumptious and lavish meal we were read to take leave of the friendly staff at the Fenix.
ALSO READ -   Pop up dining at JW Marriott Mumbai celebrates Michelin-star chefs
For Sunday brunches at the Fenix they have a Moet brunch and a Dom Perignon brunch which they call their celebration brunch. The Dom brunch is served with gold plated cutlery and a new range of crockery. Even the menu card for this brunch is a sleek and smart black menu with gold print. The buffet that is laid out on Sundays is common to both the brunches, it’s the menu with the hot items is what is different. The menu changes every week. They offer a separate kids menu too.

With the varied cuisines that Fenix offers, the ambience, the ever attentive staff and extremely talented chefs you just cannot go wrong at the Fenix

Verdict
Sunday brunch is a must do and the chef’s recommendation of the lamb and fish dishes a must have. The chocolate desserts were par excellence ( this comes from a die hard chocolate fan) and all in all it was a lovely afternoon spent at the Fenix.