On May 12th, 2006 in Cite du Temps in Geneva, Omega officially announced its partnership with SolarImpulse, which is currently planning an innovative and technically challenging exploit to fly an airplane around the world powered only by solar energy. To mark the official announcement of the partnership between Omega and SolarImpulse, Omega presented its exhibition ‘After the Moon, the Sun’. In keeping with the pioneering spirit and quest for discovery and exploration, OMEGA will perpetuate its heritage with this celestial adventure along with SolarImpulse-rated as the best in European aeronautical technology, materials development, engineering, and avionics. 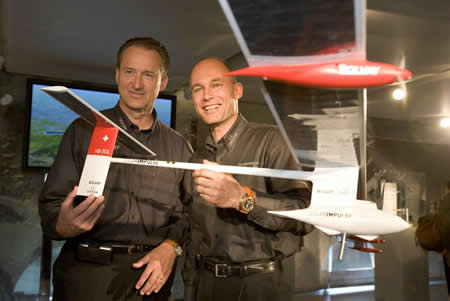 When visiting the exhibition, the relationship between Omega and SolarImpulse becomes clear through their common goal of undertaking human and technological adventures, while raising awareness of the importance of developing new technologies and finding alternative energy sources for the benefit of future generations. The planet is under serious threat due to pollution and global climatic changes, and each individual has a social responsibility to encourage positive change to ensure a safe, healthy, and beautiful world for future generations to enjoy.
This merger will facilitate the building of a prototype craft that will fly from 2008 to authenticate the probability of night flight powered by stored solar energy.