Bar, bubbly, and babes seem to be the mantra of a UK businessman who splurged $315,000 on the world’s most expensive bubbly- a 30L double Nebuchadnezzar of Armand de Brignac Midas. The bubbly has been the showstopper at two occasions in the past- once at Las Vegas party and the other by “The Champagne King” Johnson in UK. The massive bottle weighed in at 45kg and had to be carried to the trader’s table at Liverpool club PlayGround by staff members. He spent a whopping £60,000 ($100,000) on other drinks on himself and ten pals. Among his mammoth order were 40 regular-size bottles of the expensive booze as well as two 4.5 liter bottles of Grey Goose vodka coming in at £2000 ($3200) a pop. The massive bill of £203,948 ($372,000) also wrapped in a £18,540 ($30,000) tip!

The man, believed to be a foreign exchange currency trader in his twenties, was incredibly generous to the entire club, handing out glasses to everyone in the VIP room. Even shots went out to every lady in the club, and the end of the party saw about 60 women vying for his attention. That, indeed, is one hell of a party! 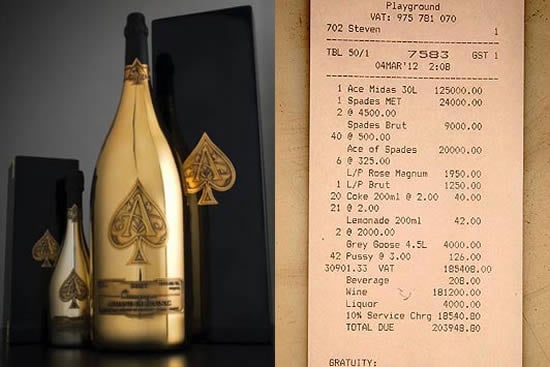 Tags from the story
Armand-De-Brignac, Bar