At this year’s Detroit Motor Show, MINI rolled out a concept version of its new John Cooper Works Hardtop. However, ahead of its official world debut at the 2015 Detroit Auto Show, MINI has officially revealed the production version of the third-generation JCW that looks almost identical to the concept version. Packing the most powerful engine ever brought to a series production Mini, the new JCW is covered with unique design elements including enlarged front intakest, body color-matched side sills, roof-mounted spoiler and a rear diffuser with centrally mounted exhaust tips finished in chrome. Under the hood is a 2.0-litre turbocharged four-pot with 228bhp and 236lb ft, up 20 hp and 29 lb-ft on the outgoing JCW. 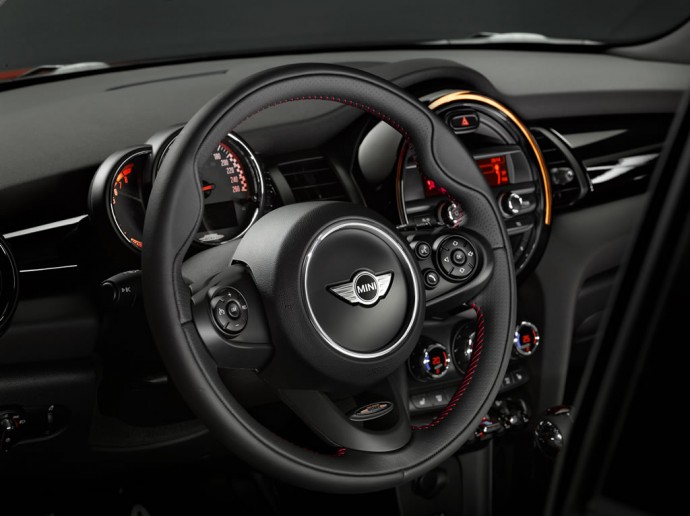 The power is channeled to the front wheels via a six-speed manual or six-speed automatic with paddle shifters, and to help the car through the corners is an electronic differential lock. MINI claims the new JCW has a 0-60 mph time of just 5.9 seconds (6.1 seconds with the manual) and a top speed of 153 mph. That means it hits 60 mph 0.3 of a second quicker than the previous model and its top speed is now 7 mph higher. Other performance upgrades include 17-inch wheels shod with 205/45 profile tires that come as standard, although 18-inch rims are available as an option. The car also features specific suspension tuning along with a Brembo brake system. On the inside, the car features model-specific doorsills, supportive front seats with integrated headrests, a three-spoke multi-function steering wheel, a new gear lever, stainless steel pedals and revised instrument graphics. The new MINI John Cooper Works will be fully revealed at the 2015 Detroit Motor Show before going on sale in the mid-2015.