The Geneva Motor Show is one of the most significant auto shows in the world with the biggest names in automotive industry choosing it as a platform to show off their latest and greatest machines. This year, the annual Swiss expo did not disappoint, or rather was one of the best we have seen in last few years. The 85th edition of the motor show saw 220 different exhibitors display over 900 vehicles. More than 90 new cars were officially unveiled at the expo. Here are seven of them that stood out from the rest and grabbed our attention:

7. McLaren P1 GTR
We begin the list a genuinely astonishing machine built by the Woking-based supercar maker McLaren. The automaker finally unveiled the production version of its hardcore P1 GTR at the Geneva Motor Show that was first seen in design concept form at the Pebble Beach Concours d’Elegance last August. In addition to its bonkers exterior design elements, the showcar at the expo drew huge attention thanks to its legendary yellow and green racing livery derived from the F1 GTR Le Mans racer. As for the specs, the engine’s output has been significantly boosted in the McLaren P1 GTR over its application in the road-going variant. The twin-turbo 3.8 liter V8 produces 789bhp (up from 727bhp in the standard P1) and the electric motor has 197bhp (up from 176bhp). The combined output is 986bhp, up from 903bhp. Just 35 of these track-only racing cars will be made and exclusively offered to existing p1 owners only at the cost of £1.9 million ($2.8 million approximately). 6. Mercedes-Maybach S600 Pullman
At this year’s Geneva Motor Show, which was completely dominated by hypercars and track-only racing machines, this new luxury limo by Mercedes was one of the few other cars that managed to grab headlines. And why won’t it; in terms of luxury and exclusivity, the Mercedes-Maybach S600 Pullman sits at the top of the German automaker’s lineup. It’s the successor of the original Pullman Mercedes first made in 1963 as a choice of transport for high-ranking monarchs and heads of state. It is the second model to join the newly established Mercedes-Maybach sub-brand. Measuring 6.5-meter long, it is a full meter longer than the Mercedes-Benz S-Class. Powered by a 530hp V12 turbocharged engine, the stretched limo features specially refined suspension and transmission systems to ensure topnotch ride quality for its passengers. The S600 Pullman’s rear compartment can accommodate four passengers in a face-to-face seating arrangement. The compartment is separated by the driver’s cabin by an electrically operated partition window featuring an 18.5-inch monitor located in front that can also be extended electrically. It will go on sale at the beginning of 2016 with a starting price of $570,000 for the unarmored version. The armored Mercedes-Maybach will cost you more than a million US dollars. 5. Aston Martin Vulcan
At the Geneva Motor Show, Aston Martin officially revealed the Vulcan – the car Aston executives are calling “the most extreme supercar” they have made. Be it the ultra-aggressive lines and the massive rear wing, or the truncated headlights and the sharp front splitters, the all-new Vulcan is nothing like the Aston Martins we are used to seeing. The over-the-top design elements of the racing car makes it appear like concept model; but believe it or not, it is production ready and track-only machine no less! The Aston Martin Vulcan comes with a V12 engine with 800 horsepower, six-speed sequential gearbox, Brembo racing brakes, and a carbon fiber monocoque that helps the car stay under 3,000 pounds. It’s a thoroughly impressive creation by the British marquee and we love it. Only 24 Aston Martin Vulcans will ever be produced costing more than $2.3 million. 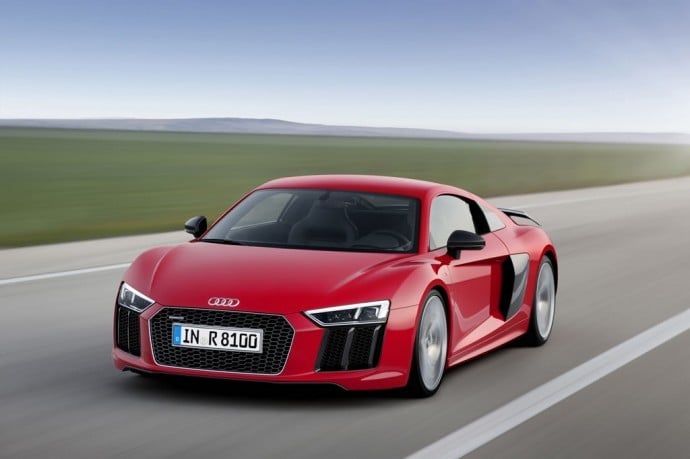 4. Audi R8 e-Tron
Audi introduced the re-designed, second generation R8 at the Geneva Motor Show. While the 2016 V10 Audi R8 is very impressive, the one that caught our attention is the e-Tron variant based on the new model. At first glance, the e-Tron model might appear to be an R8 with the stock V10 engine swapped out for a pair of electric motors and batteries. However, the first all-electric sportscar by the German automaker is a lot more than that. The pair of electric motors churns out 462 horsepower and 679 lb/feet of torque, which propels the car from zero to 62mph in just 3.9 seconds before going on to hit a top speed of 155mph. What’s more impressive is that on a single charge, it has a driving range of 280 miles, which is astonishing. The Audi R8 e-Tron will be built only on special request and the price is yet to be officially announced.

3. Bentley EXP10 Speed 6
Bentley sprung the biggest surprise of this year’s Geneva Motor Show in the form of this beautiful looking concept two-seater sportscar. It might be oddly named and also strongly echo the design philosophy of fellow Brit carmaker Aston Martin, nevertheless it is a genuinely good-looking machine with perfect proportions and gorgeous curves. And it’s not just the exterior design that is droolsome; the cabin of the Bentley EXP10 Speed 6 concept takes luxury interiors to a new level in GT cars. As for the specifications, Bentley has not hinted at what engine will power the car. Rumors suggest that it will be an eight cylinder but the Speed 6 name may hint at a six-pot unit. Since it still a concept, we have no clue if the Bentley Speed 6 GT will ever make the production cost, but we hope it does. 2. Ferrari 488 GTB
This is the replacement supercar for the Ferrari 458 and rather than a mid-cycle facelift, the Ferrari 488 GTB is practically all new. Hardly any body panels are shared between the two cars and the engine featured in the 488 GTB is also brand new. The 488 GTB is powered by a twin-turbocharged 3.9 liter V8 that produces 660 horsepower and 560 pound-feet of torque. The Ferrari 488 GTB takes its name from the cubic capacity of each of its cylinders: 488. And ‘GTB’ comes in celebration of the 40th anniversary of the gorgeous 308 GTB of 1975. As for the performance, the 0-62mph sprint takes 3.0 seconds and the top speed is more than 205mph. There is no word on the pricing yet, but it is expected to be priced close to $230,000. 1. Koenigsegg Regera
This brings us to the final car of the list, the Koenigsegg Regera. Unanimously accepted as the star of the 2015 Geneva Motor Show, the Koenigsegg Regera is the most insane hypercar on this planet. It’s the first hybrid car by the Swedish carmaker and is powered by Koenigsegg’s proven 5.0-litre twin-turbo V8 that produces 1100hp along with three electric motors that add another 700hp. It doesn’t even have a normal transmission and rather normal transmission and rather uses something called the Koenigsegg Direct Drive system. As for the dizzying performance numbers, it can go from 0-62mph in 2.8 seconds, 93mph to 155mph in 3.2 seconds and attain a top speed of 249mph in less than 20 seconds. Only 80 Koenigsegg Regeras will be built with each priced at $1.89 million without taxes.
Tags from the story
Geneva-Motor-Show