What would possibly be left to anyone’s imagination after finishing more than 100 successful expeditions in 28 countries? Well, that’s what sets Swedish adventurer Johan Ernst Nilson apart as he set off on a carbon-neutral one-year Pole2Pole trek on April 6th. His journey has started its first leg from the North Pole on a stunning one-of-a-kind sled from his expedition sponsor Audi. The carbon fiber sled has been crafted in collaboration with Norwegian expedition sled-maker Acapulk and is boasts of low weight, low friction, and high durability quotients.

The sleds were tested for safety at the Audi Cold Chamber and wind tunnel, which is also used to test Audi’s cars in simulated Arctic conditions. His subsequent journey will see him travel by dog sled, sailboat, bicycle, and kite-assisted sled. Given that Audi recently came out with a line of high-end carbon fiber skis, Nilson has surely picked his team well. 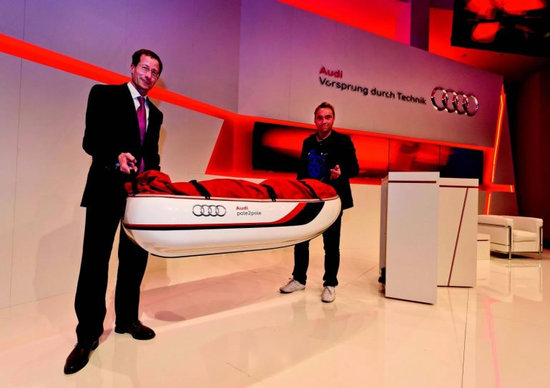