Even before the brand new Jaguar XE makes its debut at the upcoming 2014 Paris Motor Show, the British marquee is experimenting new strategies to ramp up the entry-level sedan’s marketing campaign. After revealing the Jaguar XE a couple of weeks back along with very little information about it, the automaker unveiled a unique aluminum word cloud sculpture in the shape of the XE sports saloon which has been put up for display at the London Design Museum. Now, Jaguar has joined forces with fashion designer Stella McCartney to create a new one-off Jaguar XE range. On September 29, a fleet of XEs will catwalk the streets of Paris clad in McCartney’s Superhero print from her 2015 Spring collection. 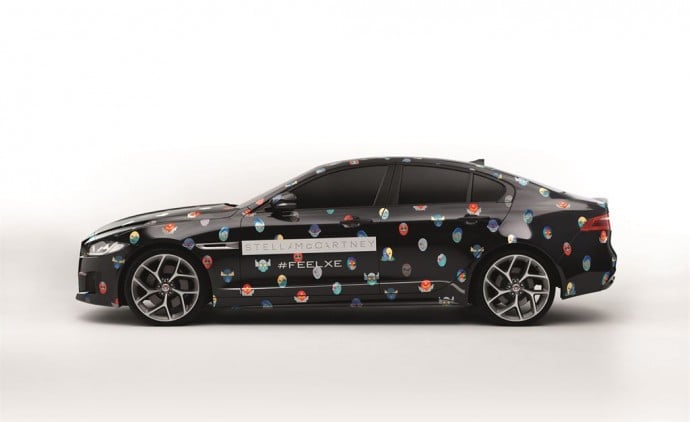 The special range will transport VIPs around the capital of France during the Paris Fashion Week (September 23 – October 1), delivering “FEEL XE Experiences that have been carefully curated by Stella and Jaguar to provide consumers with an Exhilarating taste of cultural highlights that are unique to Paris”. “It was interesting to adapt my playful Superhero print for the XE, adding a feeling of empowerment to its exhilarating design – I can’t wait to see it on the streets of Paris,” said the 43-year old. The Stella McCartney Jaguar XE fleet may see some extended service in the French capital following Paris Fashion Week 2014; the week after is Paris Motor Show 2014, where Jaguar will debut the complete XE range.

Tags from the story
Jaguar, Stella-Mcartney