To keep up with the skyrocketing competition in the luxury pickups sector, Mercedes-Benz parent Daimler AG has recently announced their new premium pickup truck labeled the X-Class. This happens to be the German luxury carmaker’s newest attempt at repurposing traditional vehicle models for a larger audience. Merc bets that the global demand for mid-sized pickups will witness an almost 40% expansion to 2025 to 2.8 million units globally.
The company showcased a concept version of this mid-size pickup truck at a recent event in Stockholm while announcing that the five-seat ride will hit showrooms late next year. 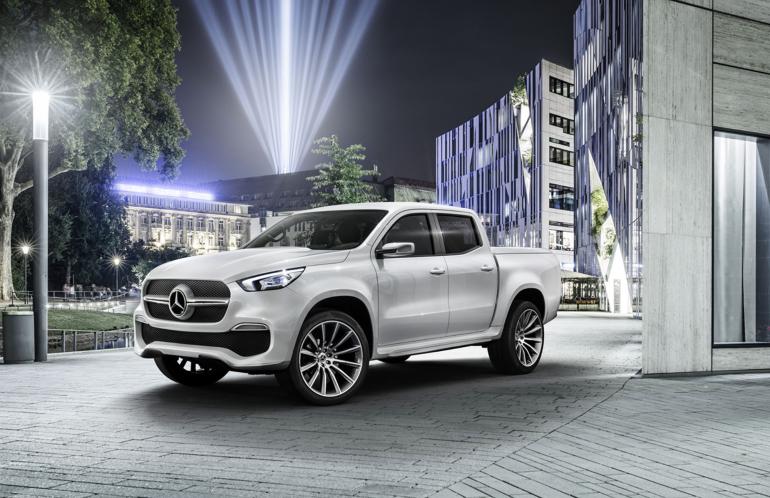 The X-Class will have two concept models, varying in features and interiors.

The white Stylish Explorer incorporates a larger version of the brand’s distinctive grille, a prominent “power dome” on the hood, and headlights that seamlessly blend into the bodywork. Swollen wheel arches lay emphasis on the width while also making room for the huge 22-inch light-alloy wheels. It will have an extended rear overhang, shortened front overhang, and two sidelines will render a rather aggressive appearance. 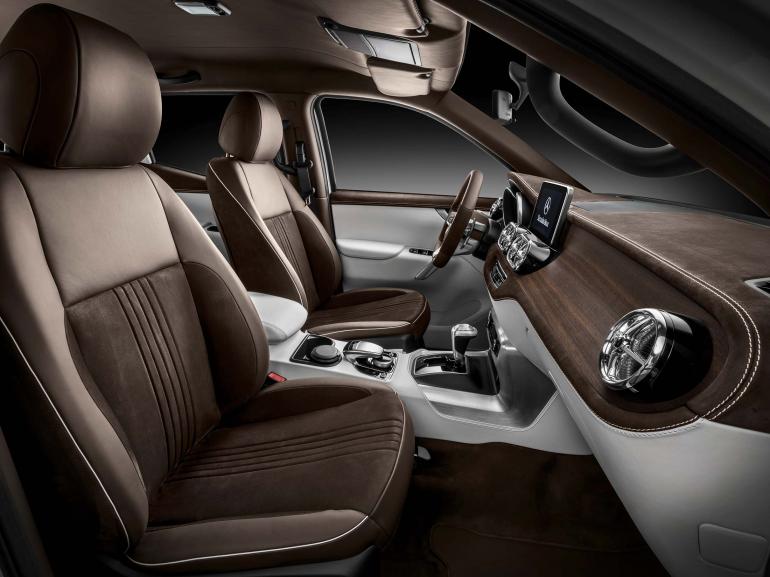 The back of the truck will showcase some chrome and striking LED light strip running over the tailgate width. This version’s interiors will have earthy brown and white nubuck leather, smoked oak, and polished brushed aluminum.

The other model dubbed the Powerful Adventurer, stands tall at 1.9 meters, has massive 35 x 11.50 wheels, and offers significantly larger ground clearance. Extra cladding, rear and front underride guards, matte carbon wheel arches, metal rear hook, electric front winch, and larger side bolsters to the seats that boost support in rough terrain – all these collectively speak volumes about the vehicle’s solid off-road capabilities. This model will be dressed up in glossy Black Nappa leather, matte carbon, and carbon black embossed leather on the dash.

Common to both models is a central display on top of the dash, round air vents, and the brand’s multifunction navigation touchpad that accepts gestures and fingertip-sketched numbers and letters. A manual handbrake has been provided to keep traditional pickup buyers happy.

Other options are integrated cellular connectivity with Wi-Fi hotspot functionality. Owners can program the navigation and check the vehicle’s fuel status and location, all remotely. Accident services and maintenance would be accessible from in-car systems as well. Special accessories like bed covers and driver-assistance system options like adaptive cruise control will also be offered.

The X-Class is supposed to have a towing capacity of up to 3.5 tons and a payload capacity of over 1.1 tons. The top-spec option will have a V6 diesel engine with 4MATIC permanent all-wheel drive, and the suspension will boast of a five-link rear axle with coil springs.

The company said that key markets being prioritized for the X-Class are Argentina, Australia, Europe, Brazil, New Zealand, and South Africa. Setting foot in the US could eventually be on the cards, head of Mercedes’ vans unit, Volker Mornhinweg revealed.

In a statement, Mercedes said that their ‘competitively priced’ X-Class vehicles are targeted towards successful adventurers, families having an active lifestyle, and Argentina’s cattle ranchers. Pricing will be announced closer to the final production model is revealed.

Tags from the story
Mercedes-Benz, Truck