If you got some $100,000 lying around the house, then maybe you can get your hands on Lamar Odom’s pawned championship rings that have now hit the auctions. Lamar Odom received these rings for winning titles with the L.A. Lakers in 2008-09 and 2009-10. For those who have forgotten his tumultuous past, the basketball star pawned his prized possessions for something he clearly liked more- drugs and sex with prostitutes. His personal life unraveled, and he could never retrieve the rings again, which means someone else can get each for at least $50000. The rings in question were as talked about as Odom’s antics and ill-treatment towards wife Khloe Kardashian. The ring buyer needs to be a Lamar fan apart from loving the L.A. Lakers as the rings weighing 75 grams and 69 grams, respectively – feature special engravings, including realistic portraits of Odom’s face. The ‘09 ring sees the Larry O’Brien Championship Trophy with the ‘Lakers’ team name covered in diamonds. The sides of the ring read the team’s seasonal stats of “65-17” and depict Odom’s head and player number. 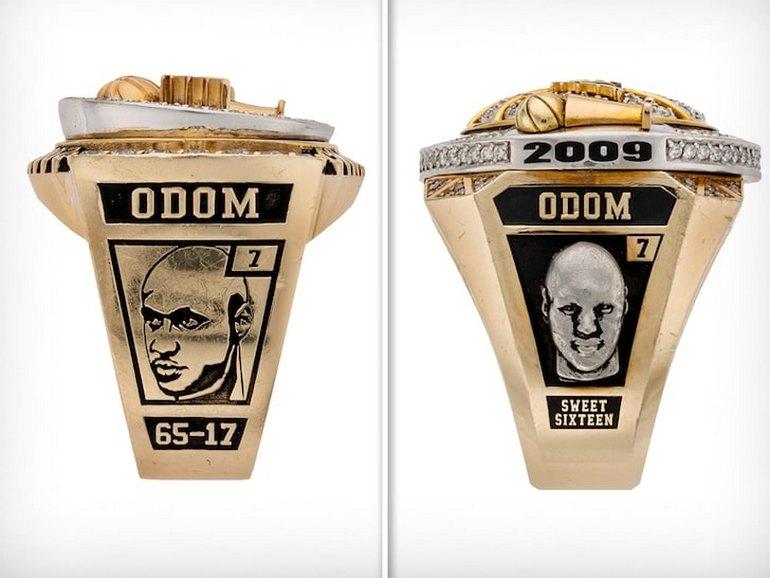 The 2010 ring also features a high level of detail with two Larry O’Brien Trophies and a swatch of the Game Seven ball affixed to the interior of the ring. The rings will be sold by Heritage Auctions.

Tags from the story
NBA, Rings