Ariana Grande gets what she wants if her 7 rings lyrics are anything to go by, ‘I want it, I get it’. This also means if she doesn’t want you, off you go. Forever 21 must’ve paid heed to what she’s been singing all this time and avoided the $10 lawsuit she slapped all across their posts. The story goes- Forever 21 asked Grande to partner with the brand in late 2018 but she declined. Lawyers for Grande allege that Forever 21 subsequently plagiarized imagery from the video for Grande’s single 7 Rings, released in January, for an advertising campaign. If you take a look at the campaign images you do see a Grande lookalike wearing a high ponytail which is a dead giveaway from the star’s signature look. To top it they used hair accessories comprising pink puffballs and sparkly tassels, as Grande does in the 7 Rings video. The cherry on the cake was the caption beneath the image quotes a lyric from the song: “Gee thanks, just bought it!” 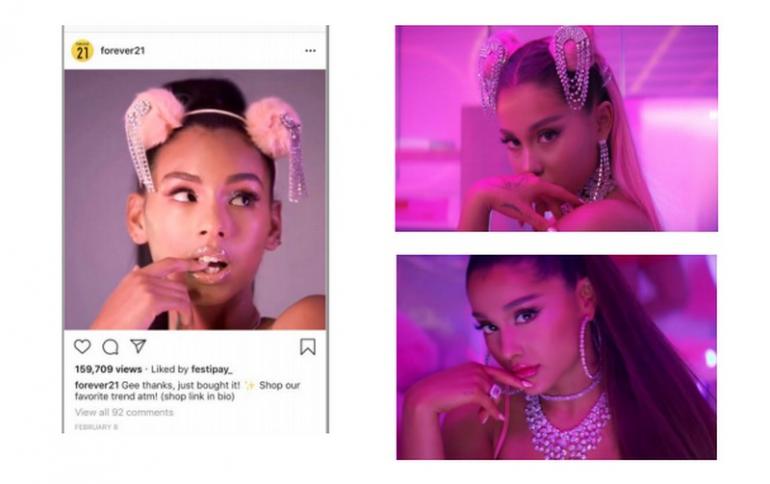 That actually looks like an open challenge to Ariana, with Forever 21 getting what they want even after her noncompliance. Funny thing is, Grande didn’t ask for permission before annexing “My Favorite Things” from The Sound of Music in “7 rings.” And she paid a hefty price for it, 90 percent of the royalties to Rodgers and Hammerstein. She would now like to be on the winning side as earlier this week, the pop star filed a $10 million lawsuit against the fast-fashion retailer in a Los Angeles federal court. The star claims that Forever 21 posted at least 30 unauthorized images and videos across its website and social media platforms, using her name, likeness, and music, after Grande turned down an endorsement deal. Lets the battles begin….