Who’d have thought that a virtual Gucci bag could sell for more than a real one? But, if Roblox (the massively popular children’s platform) is to be believed, players are paying as much (if not more) for it. Yes, that’s right!

Brands should really pay attention to digital fashion. The average price of a @gucci purse in @Roblox recently reached $1,578 -> on par with real handbags!

After spending 1000s of hours virtually, folks care just as much about their digital handbags as they do their real ones! pic.twitter.com/jr2fuTUhgW


The iconic bee-embroidered Gucci Dionysus bag was purchased for roughly $4,115 on the gaming platform off late. It is only available for use online and has “no value, use, [or] transferability outside of the Roblox world,” as stated by internet entrepreneur Alexis Ohanian. 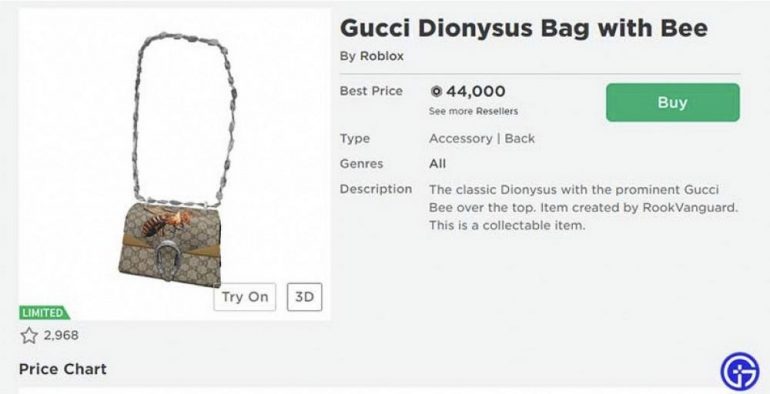 Comparable to an avatar accessory than an NFT, which can be accessed at any time online or resold, the sale of the virtual arm candy is indeed mind-boggling. It brings to the perspective that the pandemic has pushed most aspects of our lives to the online world.

The Gucci Dionysus bag was introduced in an exclusive capacity as part of a virtual two-week event called “Gucci Garden Experience” and is said to have fetched the high price due to its limited availability. Commenting on it, gaming site Polygon, in a statement, said, “Due to it (the limited availability), the purses immediately became a hot commodity. Roblox scalpers [began to] start selling the purse for ridiculous amounts of money, with some people listing the purse for 1 million Robux [or roughly $10,000].”

Remember: this Roblox purse is not an NFT and thus has no value/use/transferability outside the Roblox world-yet it's worth more than the physical one.


Still, questioning if there’s a market for digital fashion?

Tags from the story
Bags, Gucci