British company Dyson has been making futuristic hand dryers, room fans, and vacuum cleaners for several decades now but the company stayed away from introducing roomba-styled robotic vacuum cleaners so far, saying that the technology just isn’t there to make a good product. But, finally the brand has decided to join the bandwagon and introduced its first robotic vacuum cleaner dubbed ‘Dyson 360 Eye’ which took them a whopping 16 years and close to $47 million to research and develop. The company unveiled the 360 Eye in Tokyo, and will keep the apartments in Japan spick and clean before it hits the markets in other parts of the world. 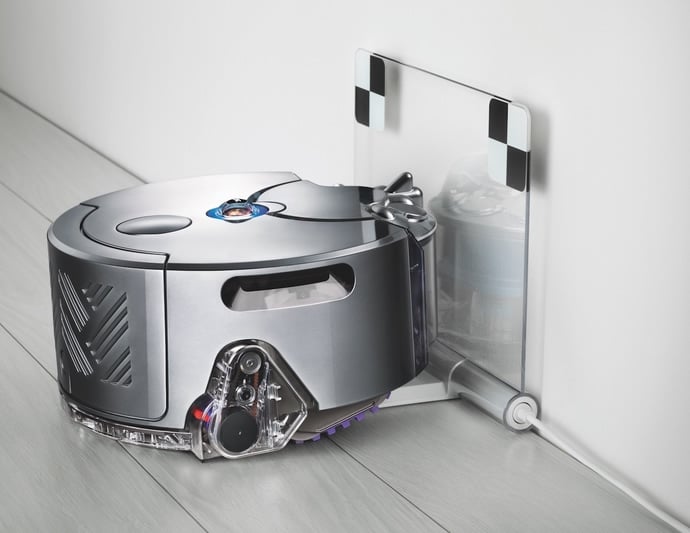 Like all the other Dyson vacuum cleaners, the Dyson 360 Eye includes the company’s patented cyclone technology and also packs a V2 Dyson digital motor like the one in the DC59 portable vacuum model. But the most crucial feature of the model is the 360-degree panoramic camera which is coupled with infrared sensors to look at an entire room and determine its position. The camera can capture up to 30 frames per second and analyzes each shot to identify a room’s geometry and potential obstacles, and chart its path accordingly. “Most robotic vacuum cleaners don’t see their environment, have little suction, and don’t clean properly,” says James Dyson, the inventor that founded the company. “They are gimmicks. Vision, combined with our high-speed digital motor and cyclone technology, is the key to achieving a high-performing robot vacuum — a genuine labor-saving device.” The 360 Eye has a capacity to hold up to 0.4 liters of dirt and dust, lasts 20 to 30 minutes on a charge before needing recharge, and weighs 5.22 pounds. Dyson has also developed an iOS and Android app so that the 360 Eye can be assigned a cleaning schedule when its owners are away. The pricing of the Dyson 360 Eye is yet to be announced but it will hit the markets in Japan in spring next year.

Tags from the story
Dyson, Vacuum-Cleaner