If designer and baker/ chocolatier collaborations are anything to go by, and it seems like they are, then these could be the cutest trend in luxury craftsmanship. Although not a very new one, back in 2009 Louboutin collaborated with Ladurée to make some macaroons, shortly after which Marni took the cue. And this year, around the same time as Donna Karan’s 30th anniversary macaroon collection’s announcement comes another such news. Only this time, instead of Ladurée it’s patisserie chef Pierre Marcolini and an Olympia Le-Tan designed chocolate book.

While the description “chocolate book” might sound a tad confusing, it is actually closest to the truth. Moving away from the typical macaroon box style, something that despite adding all the glitz, the aforementioned failed to do, French designer Olympia Le-Tan has created two chocolate boxes, which from the outside resemble rather tongue-in-cheek books. With quirky covers that read “Elles n’ont qu’un mot à la…” meaning “Girls have only one word on their lips…” or “J’ai les yeux plus gros que la ventre” (My eyes are bigger than my tummy), the two can hold 30 chocolates or a dozen macaroons. 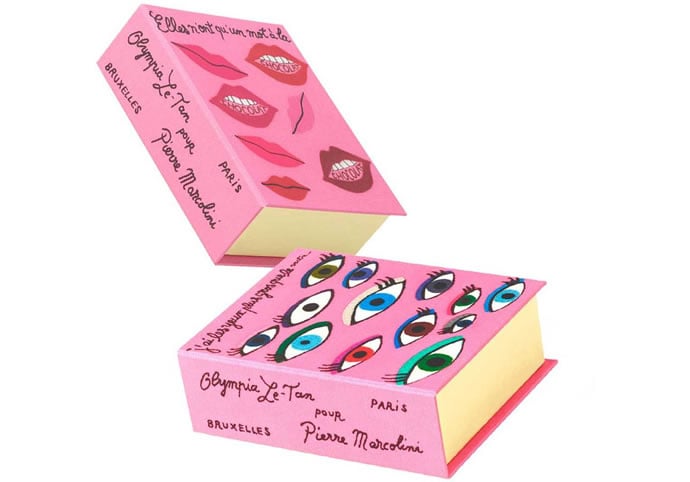 But along with that, they hold lighter hues of pink, a sweet inscription to the buyer along with Le-Tan’s whimsical logo and illustrations of birds and flowers, contrary to the exterior’s kitschy boldness. All the more reason to add them to one’s cool collectibles! The collection is being sold at Pierre Marcolini’s stores and the Haute Chocolaterie boutique rue Saint-Honoré in Paris. It is also available at Selfridges and Marcolini.com, with 30 bespoke chocolate pieces priced at €37 ($48) and 12 bespoke macaroons at €27 ($35).