‘The best of both worlds’ this term seems a bit redundant when it comes to performance or sportscars. On one hand you have jaw dropping looks, mind boggling looks, stellar driving dynamics and on the other hand you have comfort, practicality and maybe even efficiency. But what if I told you there is a category of cars where both these worlds co-exist and that too gracefully. I am talking about ‘sleeper cars’. To put it even simply, think about Clark Kent (aka Superman), an average joe, he is unassuming and tries his best to blend in with everyone (the ordinary). But when the time comes he shows the world his true self: “Faster than a speeding bullet. More powerful than a locomotive…..”. Sleeper cars are very similar, they come with minute and subtle design changes which are mostly visible to the trained eye. But should you come across one on an empty stretch of road, you will be surprised to see it disappear into the horizon in no time. 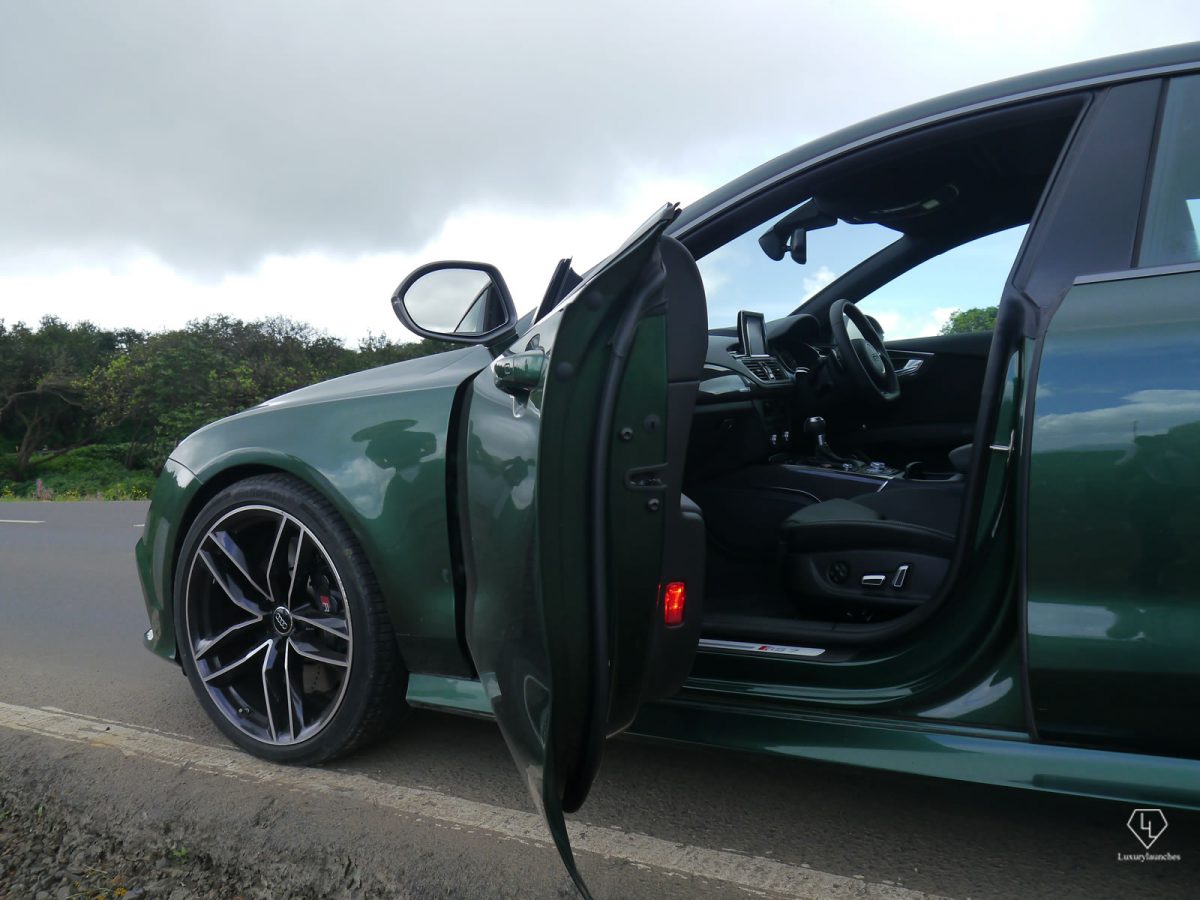 The Indian sleeper car market is dominated by the three German badges – Mercedes Benz has the AMG, BMW has the M and Audi rivals them with RennSport (RS), its own tuning arm. We recently spent some time with the Audi RS7 Performance, an extremely potent variant of the Audi A7.

The looks –
A car as curvy like the A7 does stand out. The designers at the RS division have added their own touches to this four door coupe, carbon fiber mirrors, dual exhausts, a massive black grille and gorgeous 21 inch forged aluminium wheels. Add these to the sloping headline, Audi’s insignia daytime running lights, the creases and you have an absolute stunner. 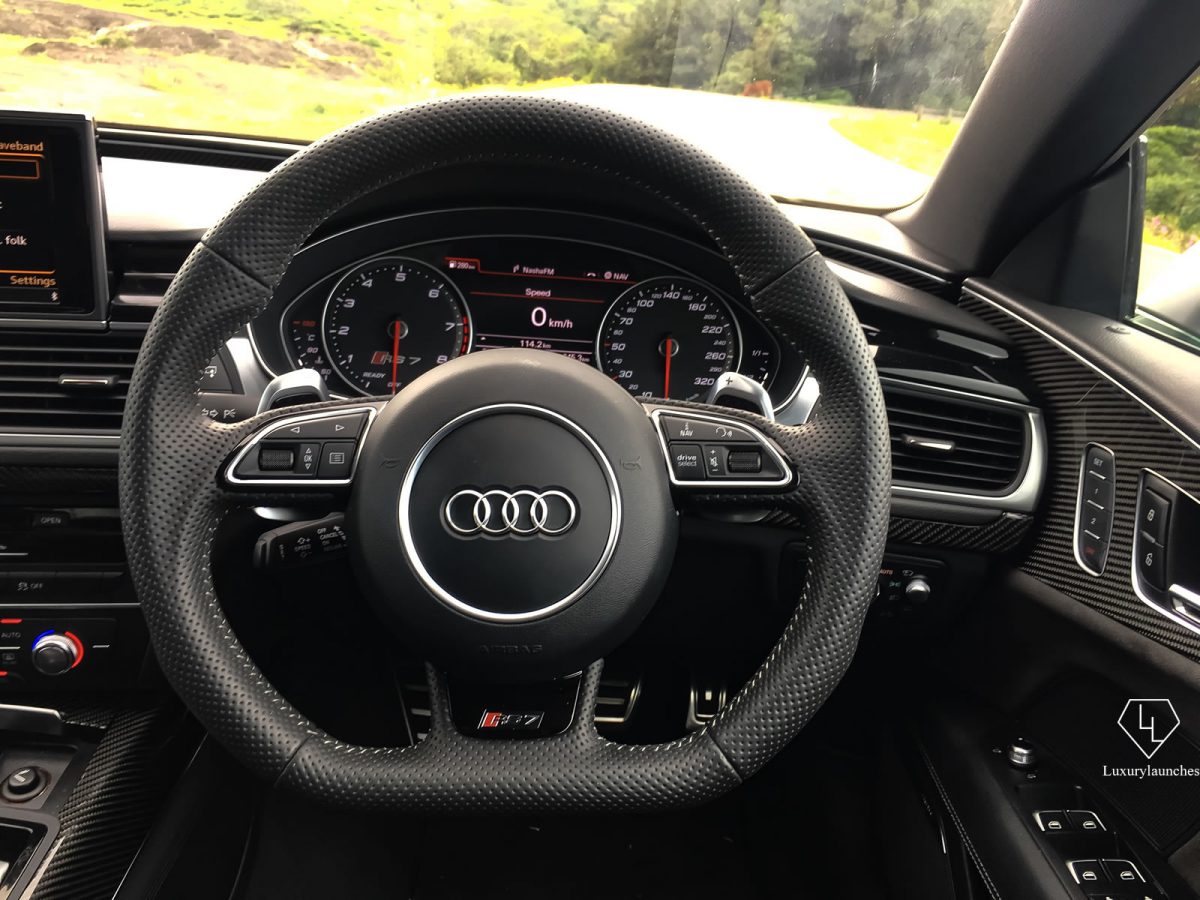 The German rocket –
Under the hood is a 4.0 liter twin turbocharged V8 that delivers a mind boggling 605 horsepower and 553 pound-feet (700 nM) of torque. To put things in perspective let’s compare it with a supercar, Audi’s R8 V10 Plus also the company’s most powerful production car churns out just 5 more horses at 610 bhp. 0 to 100 from a standstill comes in just 3.7 seconds, the Lamborghini Huracan does this in 3.2 seconds. In comparison the RS7 comes with an extra pair of doors, a 535 liter boot and weighs 2 tonnes (450 kgs more).

Flying on wheels –
So what is it to like the put the foot down in the RS7 Performance? Should you ever do so, I would highly recommend that the road is absolutely clear for the next half a kilometer. The voracity at which this car picks up speed is just mind boggling. At your disposal is 700 nM of torque that is readily available from 1750 – 6000 RPM. So, no matter what speed you are on, a gentle tap on the accelerator pedal and the car will gush ahead. The 8 speed automatic gearbox and the paddle shifters let you shift gears in an instant. Helping you further tame all this power is Audi’s Quattro all-wheel drive system which delivers phenomenal grip and makes cornering for lack of a better word ‘fun’. The exhaust note is satisfyingly waspy but for an engine that churns out 600 + race bred horses an active exhaust would have been most welcome. 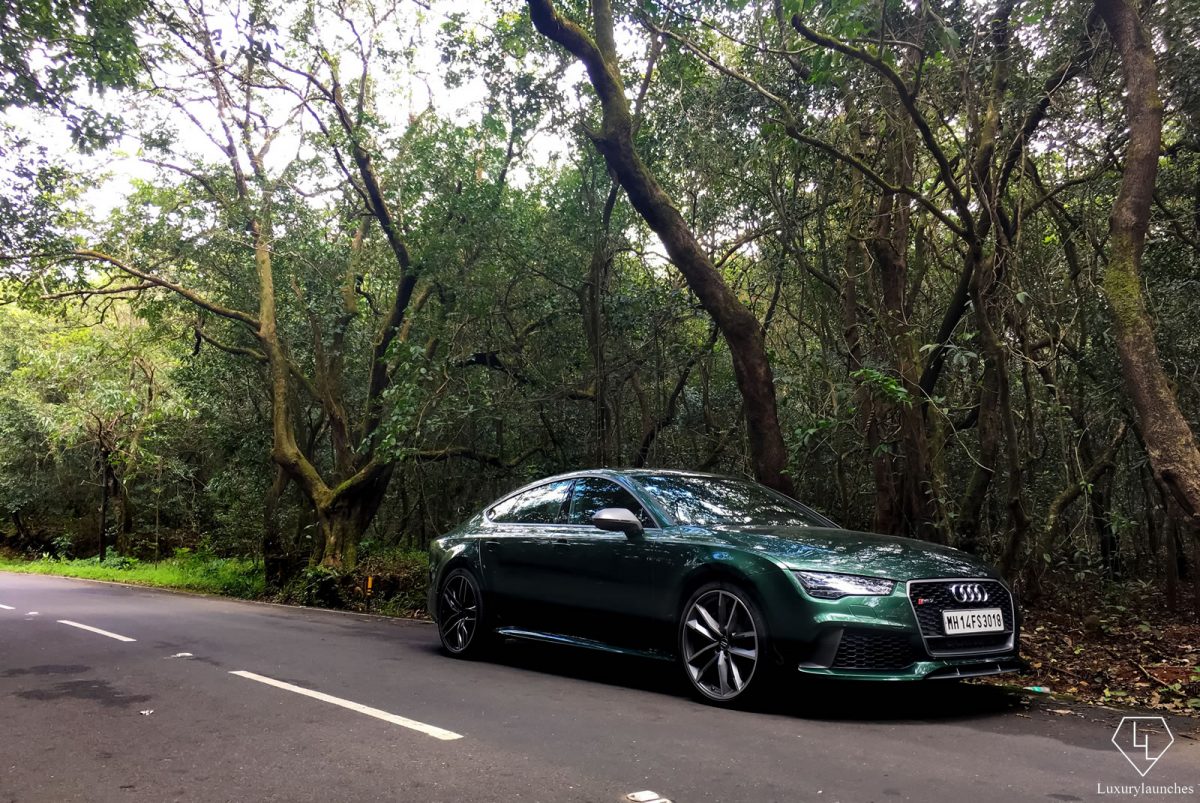 The twists, the turns, the stares, the joy of seeing the cars disappearing in the rear view mirror, I enjoyed it all on the Mumbai-Poona expressway. With so much raw power on the tap I never felt the need to switch the car on ‘Sports Mode’. A note to enthusiasts – The car comes with an overboost function which temporarily draws 50 nM of torque from the engine. On entering the cloggy city traffic the car’s cylinder on demand system kicked in, a smart technology which automatically deactivates four cylinders making the car a tad greener. Press the pedal and all the eight cylinders will come back to life without you noticing it. Speaking of city driving the air suspension remarkably absorbs most of the bumps and pots that our roads throw at it. On a good road you may mistake its smoothness for that of an A8L. 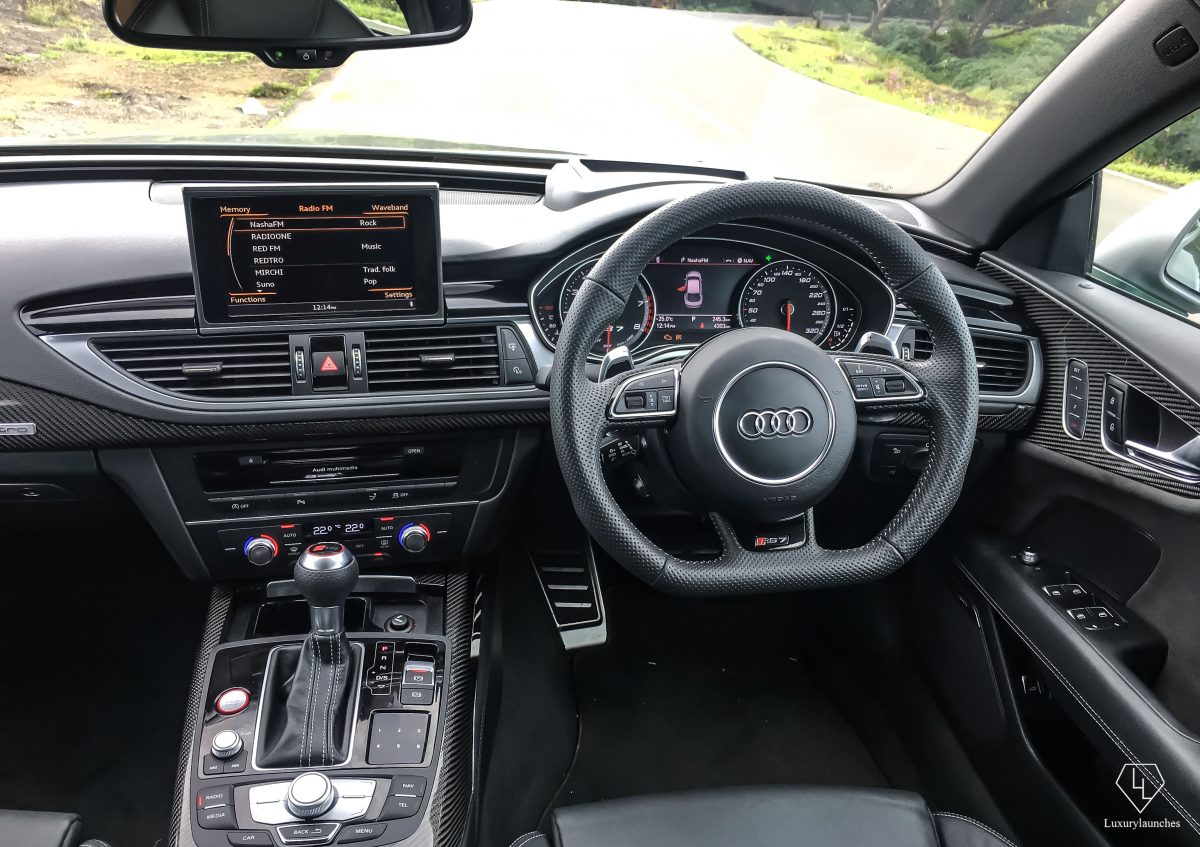 Stepping inside –
Why have all the fun when you can share it with family and friends. The RS7 Performance comfortably seats four passengers in its front and rear sports seats. Dressed in the choicest of black leather the seats offer the grip and lock the passengers, much needed for those out of city weekend sprints. Carbon fiber panels accentuate the sportiness inside the cabin as they adore the center column, glove compartment and the doors. In all its perfection there is one caveat and that is use of the dated MMI interface and controls instead of the ‘Virtual cockpit’, a super intuitive interface which replaces all the dials and most of the controls with a high resolution display. 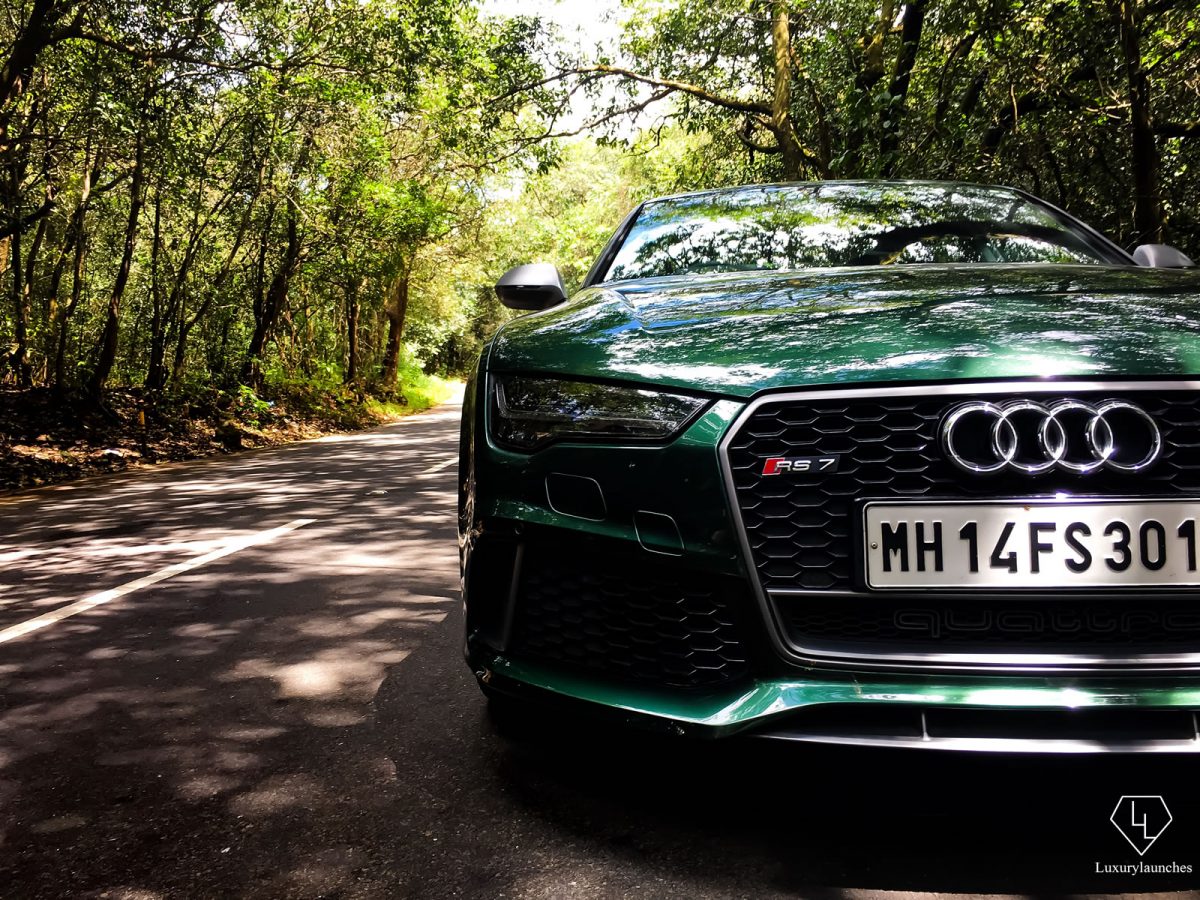 The Audi RS7 Performance is essentially a supercar in the body of a sedan. Had Audi added more power it would have started to sway towards the hypercar category. When it comes to looks and sheer road presence it instantly steals the thunder away from its perpetual competitors the Mercedes E63 AMG and the BMW M5. The lack of ‘Virtual Cockpit’ and Apple Airplay / Google Auto does make the car a bit dim when it comes to technology. The ideal customer would be a mid-aged achiever who would want the performance of a sportscar and not the attention that something like the Audi R8 would get but would be still keen to burn some rubber and grin on seeing the tacho jump when taking the family for a road trip.