If you go through the annals of automobile history, you’d see the mention of the Porsche 911 in both sepia and monochrome eras. The model has been around for so long that generations tell tales of amazement, which usually inspire subscriptions to newer renditions, which are steadily enhancing experiences. Much apart in specifications than its 1960s ancestors, we drove the 911 Carrera Cabriolet that offered the same pulsating energy and passion that Porsche has so unfailingly reproduced in each subsequent variant of this phenomenal driving experience.


The car arrived on Indian soil in the end of June and what had impressed us from the word go was how uniquely this car has been designed. This and the power they have packed into the impressive 3-liter engine pretty much summarize the 911, like they have, for several generations before. 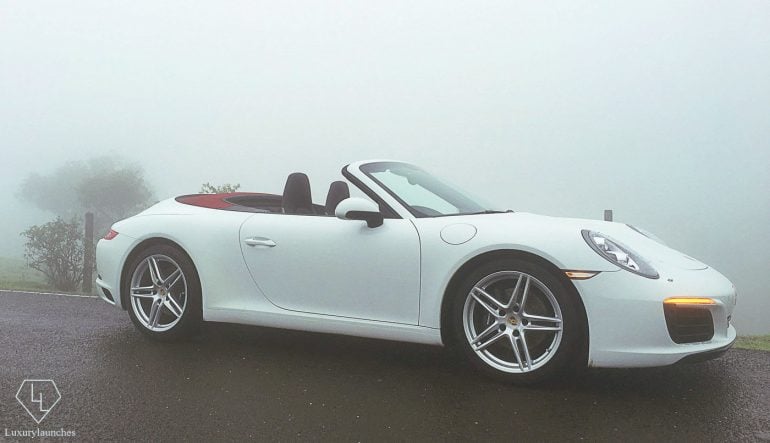 Nearly classic, absolutely sporty
Porsche have retained the customary round headlamps up front. To make them more alluring all through the day, the headlamps also offer daylight running, thanks to the company’s 4-point LEDs. Depending on the mercy the weather shows, you can completely transform your in-car experience by dropping the top in just 20 seconds. The pictures tell enough tales of the exteriors so we will leave this here. 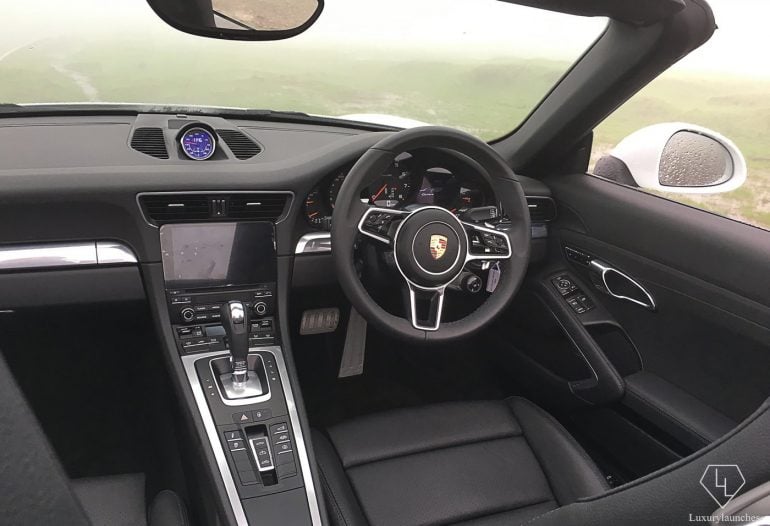 Thoroughly Porsche interiors
As you step into the Carrera drop-top, there’s a good chance that the number of buttons that greet you will seem to be more than you’d expect. But it’s all part of the act. An act to keep in line with Porsche’s impeccable interior setup, which is why familiarity for any previous Porsche owner will not be a challenge. They’ve included that elegant clock on the center of the dash as well. The driver’s seat is pampered with a bunch of adjustments for maximum comfort. The same cannot be spoken about the rear seats but it still beats the idea of a two-seater. The boot isn’t the most spacious one you may have come across. What really improved in this rendition is the infotainment system, complete with a crisp and intuitive touchscreen display and support for Apple CarPlay. This makes connecting and enjoying media from your iPhone incredibly easy. However, Android users aren’t blessed with something so exclusive. To sum it up, the interiors are great for the driver who’d give anything to spin the steering wheel logo around. 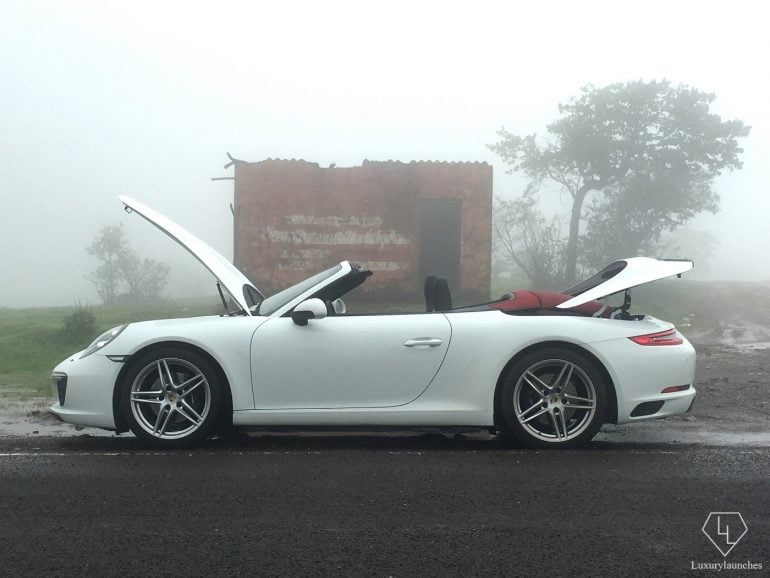 “When you rev this baby up there’s a definitive, unmissable roar that takes control of your senses.”

A not-so-modest 3.0-liter flat six engine
Do not be swayed by the 3-liter V6 specific of the engine. It may be commonplace to find this in mid-level sedans but that’s just theory. When you rev this baby up there’s a definitive, unmissable roar that takes control of your senses. Unbelievable as it may sound, the symphony of this raging engine was the most memorable takeaway from the whole experience for me. But it isn’t all bark. The 7-speed dual clutch makes gear changing really swift and smooth. If you’re still convinced that this is a mid-level sedan with sporty looks then be forewarned for it can comfortably go from still to 100 kmph in just 4.7 seconds! If you know Porsche enough, you wouldn’t be unfamiliar with the million dollar 918. The 911 Carrera comes with the same rotary sensor employed in the 918. You can now choose from between four driving modes, especially crafted for steering, throttle, suspension and response. If you want to challenge someone on the Mumbai-Pune expressway, there wouldn’t be a better stead to set out on. The sports performance mode efficiently drops to the lowest gear possible to deliver ‘ultra-sporty’ driving for 20 seconds, which is ideal for overtaking. 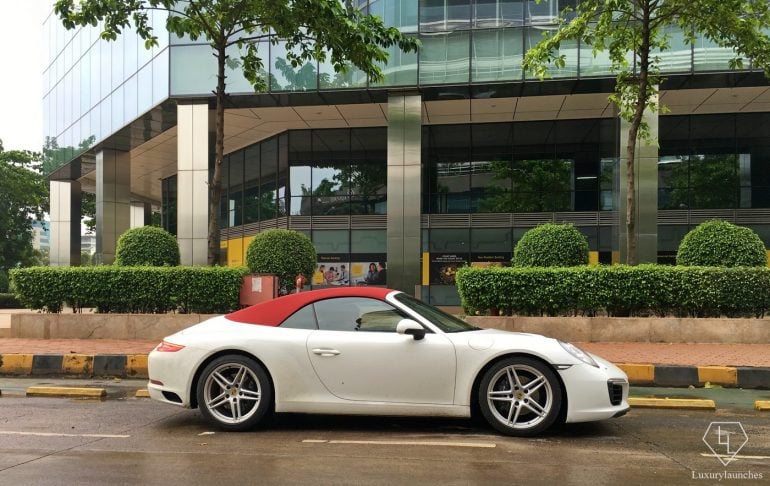 Great for the city
Practicality of owning a Porsche in a traffic web like Mumbai is a question that may haunt you. What you should consider is the Porsche Active Suspension Management system (PASM), which dynamically adjusts the dampring force on each wheel to suit hostile terrain. There isn’t much more you could ask in a Mumbai monsoon where potholes are more regular than clueless pedestrians. When we stretched the cabriolet’s legs on Mumbai roads, it glided at 80 kmph on the 7 gear at 1,100 RPM with a slight humming noise of the engine in the background. For a moment we thought we were in a Mercedes S Class. Another incredible observation from our drive was that the car was rather economical for its kind. It returned 9.5 kms to a liter in a spirited highway sprint. Surprised? 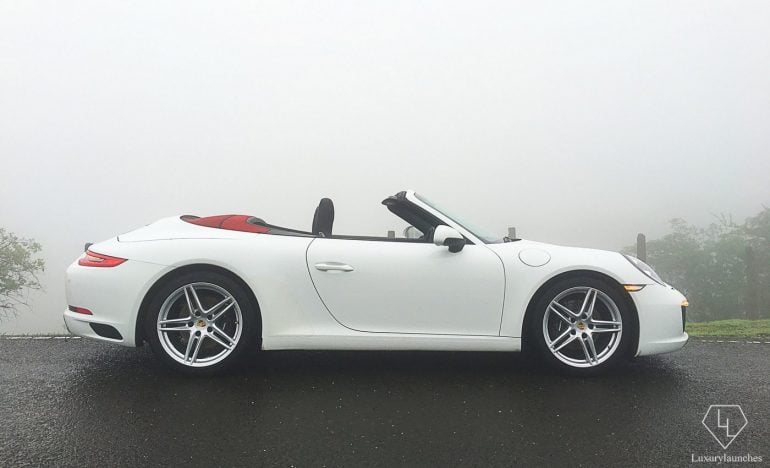 Verdict
The practicality aspect of the Porsche 911 Carrera is what sets it apart from other cars in its category. It is voluminous within, which suits Indian demand, it’s rather economical and isn’t a space-hogger on crowded streets, making it a smart investment. Thanks to the rear engine, the cabin remains silent while on the outside it roars loud enough to turn heads. For us, it is the best 911 open-top till date.