If you have been a Star Trek plus Luxurylaunches follower, then you would surely remember that we wrote about a Star Trek – themed home theater with real props. That was then but today we have another interesting home theater inspired by the Enterprise NCC-1701D from Star Trek – The Next Generation. Stationed in Palm Beach County, FL home, the identity of the owners is kept under covers….wonder why? However named the best theme theater installation at CEDIA 2007, this theater features motion-activated air-lock doors with a series of sound effects. You can also opt to press the “Red Alert” button on the Crestron TPMC-10 controller to turn all of the LEDs bright red and flashing. The system also features “one of the largest Kaleidescape hard-drive based storage systems” ever created, amassing eight servers with 3,816 DVDs. Completed in 2006, the three areas took a total of six months. The end result was a theater, bar, and ready room, measuring a total of 70-by-22 feet.

Jay Miller, president of Acoustic Innovations, noticed that their client was a collector of “vintage” video games. An idea was born, and they ultimately opted for something that expressed their sci-fi interests. “It adds a lot to the experience because you are introduced to the ‘theme’ when you enter the bar and ready room area,” says Jeff Hoover, dream maker and president of Audio Advisors. “It sets the mood that something cool, fun and exciting is about to happen next.” “The client has amassed a very large collection of original props, models and drawings from “Star Trek,” TV series and other sci-fi movies,” says Hoover. 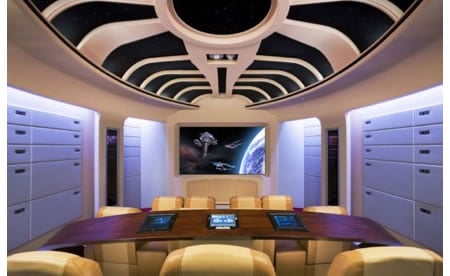 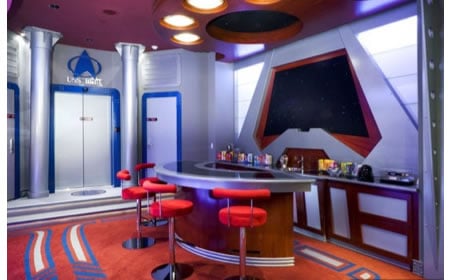 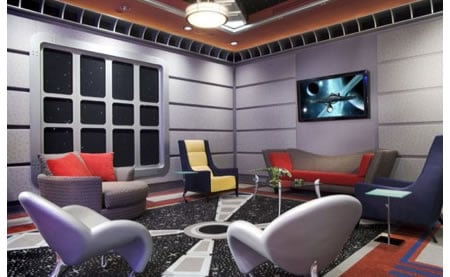