Over the last couple of decades, the average age of ultra-wealthy has been constantly plummeting. The new generation of billionaires who prefer to be identified as disruptors refuses to adhere to established conventions. To cater to these self-made overachieving millennials, Rolls-Royce introduced its Black Badge family of cars in 2016 that represents a bolder interpretation of their ultra-luxurious line-up.

Five years ago, the British marque debuted Black Badge with Wraith and Ghost, which was subsequently extended to other models. Immediately, it became a runaway success and now represents 27% of Rolls-Royce’s product commissions. Rolls-Royce has now added a new model to its Black Badge family that is being touted as the purest Black Badge motor car in the marque’s history. Meet the brand new Black Badge Ghost, a thoroughly re-engineered version of Rolls-Royce’s most advanced car which will make you go week in the knees. 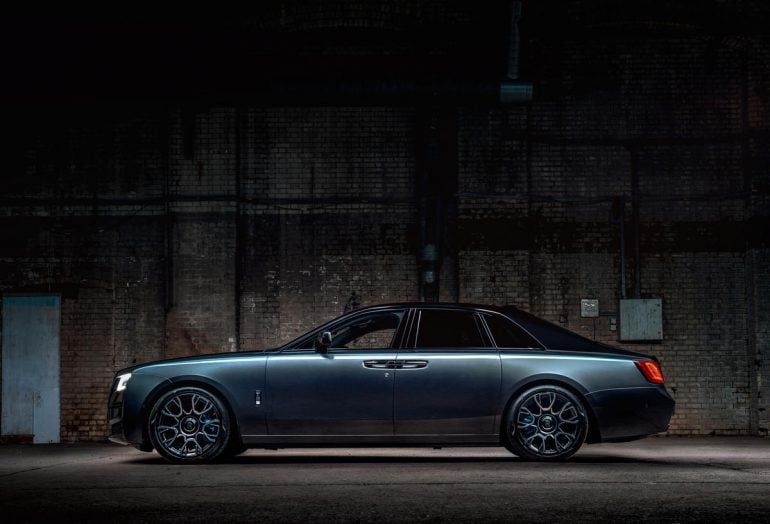 The new Black Badge model is based on the 2nd-generation Rolls-Royce Ghost that debuted a little more than a year ago. It has already become one of the fastest-selling cars for the marque with more than 3,500 commissions worldwide. The new Ghost also introduced something called “Post Opulence” which represents a new design language of minimalism specially crafted for a younger group of clients. The newest iteration of the luxury sedan reveals the dark side of Post Opulence which takes minimalism and the use of expectational materials to the extreme. 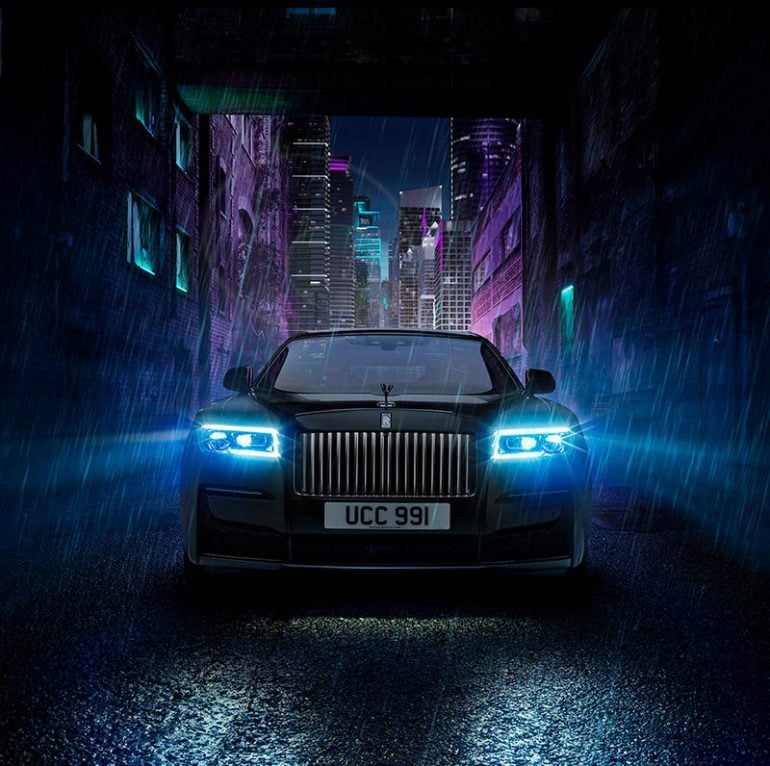 Starting with the exterior, the customers of Black Badge models can select any of Rolls-Royce’s 44,000 ‘ready-to-wear’ colors or even commission a completely bespoke hue. However, according to the British marque, the majority of the clients order their Black Badge cars in signature black. 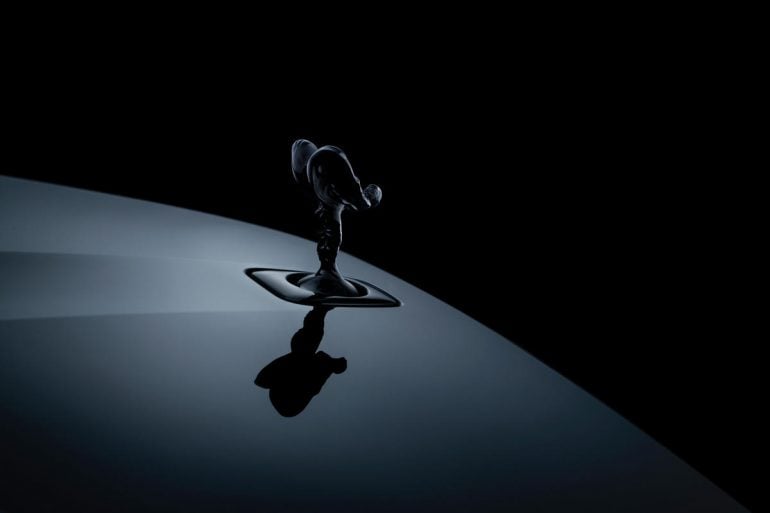 The unmatched hue and shine of the darkest black paint in the motor industry are achieved by a meticulous process that starts with 100lbs of paint being applied to an electrostatically charged body and ends with hand-polishing by a team of four craftsmen to produce the signature high-gloss piano finish. A beautiful high-contrast, hand-painted coachline further augments the deep finish of the Black Badge Ghost. The example seen in the picture features a neon blue coachline that supplements the dramatic coachwork of the Ghost. 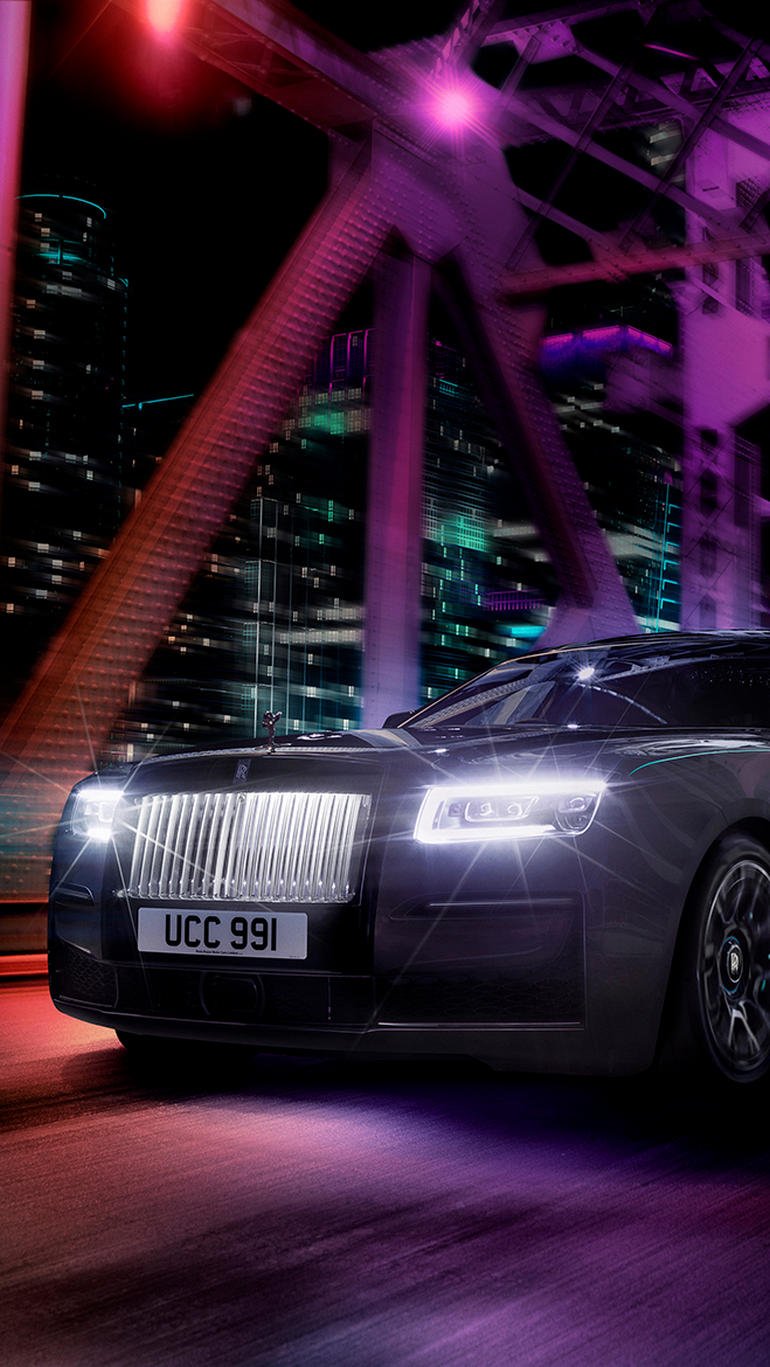 The dark theme of the Black Badge Ghost is carried over to the shiny chrome parts of the exterior, including the high-polished Spirit of Ecstasy and Pantheon Grille. The inconspicuous look of these parts is achieved by introducing chrome electrolytes to the traditional chrome plating process. Each of these components is then precision-polished by hand to achieve a mirror-black chrome finish. Another highlight of the new Black Badge Ghost is its Bespoke 21-inch composite wheelset. The rim of each wheel is made out of 22 layers of carbon fiber that are double folded, forming a total of 44 layers of carbon fiber for greater strength. 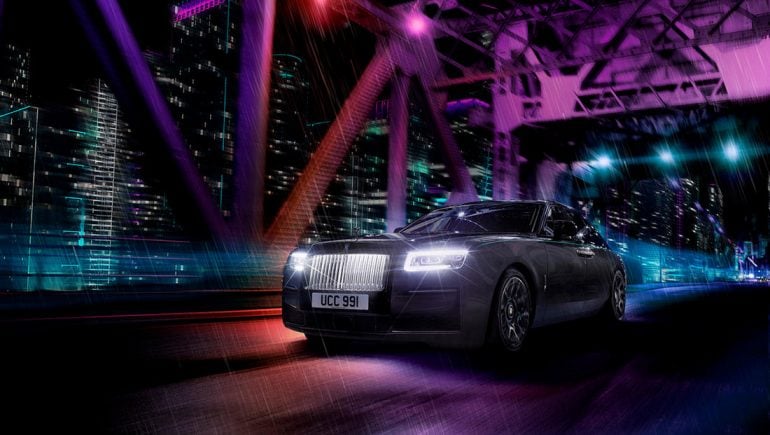 The carbon fiber construction is on full display with the help of a lightly tinted lacquer finish applied to the rim. The center hub is made of 3D-forged aluminum and is bonded to the carbon fiber wheel using aerospace-grade titanium fasteners. The bespoke wheel gets the marque’s hallmark floating hubcap and features the same neon paint accents found on the coachline which is also carried over to the calipers. 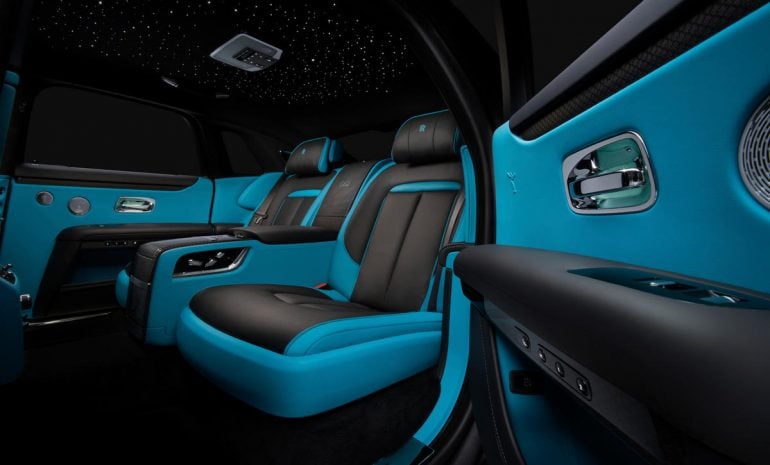 The interior of the Black Badge Ghost gets the same minimalistic treatment as the exterior, but the material choices and the cabin design are simply droolsome. The dynamic character of the Black Badge model is reflected by the complex but subtle weave of the deep diamond pattern that’s rendered in carbon and metallic fibers. 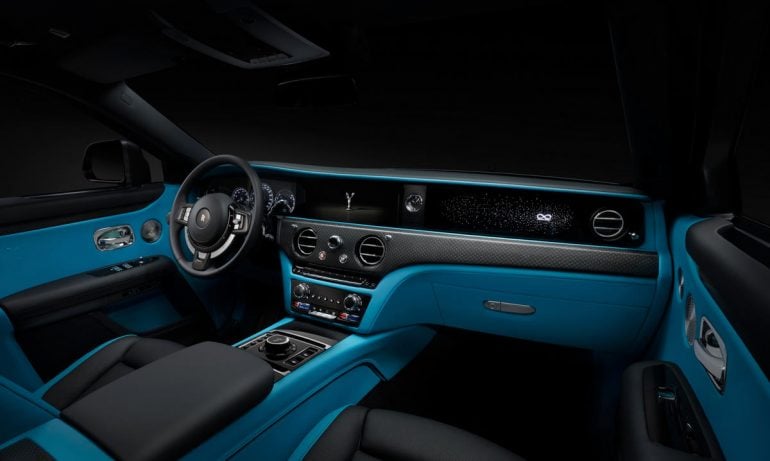 Black Bolivar veneer is used for the uppermost base layer onto which leaves woven from resin-coated carbon and contrasting metal-coated thread are laid in a diamond pattern by hand, creating a stunning 3D effect. To match the black theme, air vent surrounds on the dashboard and in the rear cabin are darkened using physical vapor deposition, which protects it from discoloration over time. Even the clock in the Black Badge Ghost is bespoke. The tips of the hands and the twelve, three, six, and nine clock markers are offered in a subdued chrome finish. 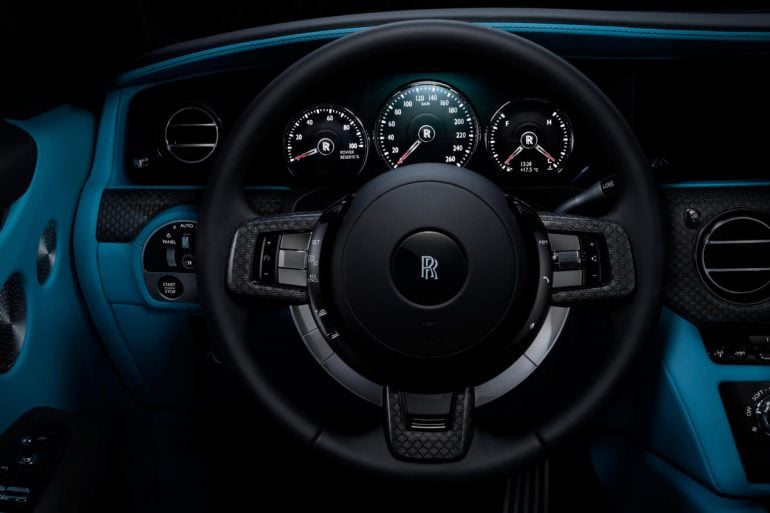 The illuminated fascia on the dashboard of the Ghost gets the glowing Lemniscate symbol of Black Badge models, surrounded by more than 850 stars. The motif that looks like the symbol of infinity is illuminated by 152 LEDs mounted above and beneath the fascia. Each of them is meticulously color-matched to the cabin’s clock and instrument dial lighting and echoes the sparkle of the Shooting Star Starlight Headliner. 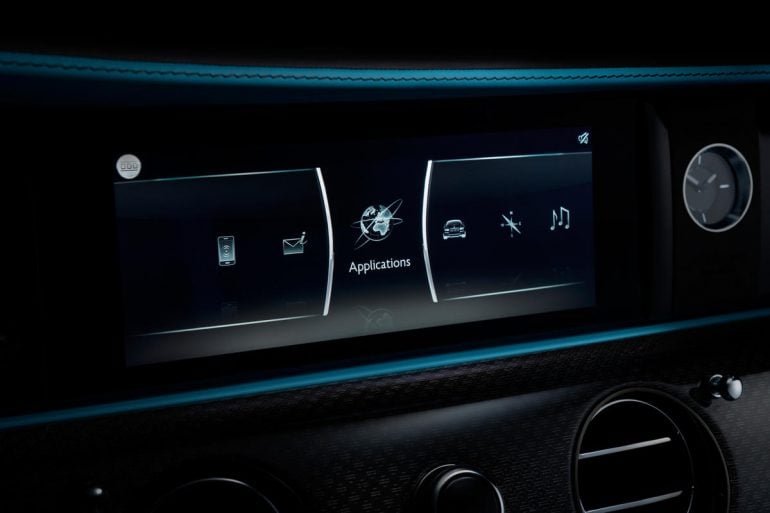 Rolls-Royce says the customers of Black Badge models prefer to drive their own cars rather than spending time at the rear seats. The younger generation clients also demand more dynamic driving characteristics from their Rolls-Royce motor cars. Rolls-Royce has reengineered the aluminum spaceframe chassis of the Ghost and fitted it with more voluminous air springs to make it more driver-friendly. 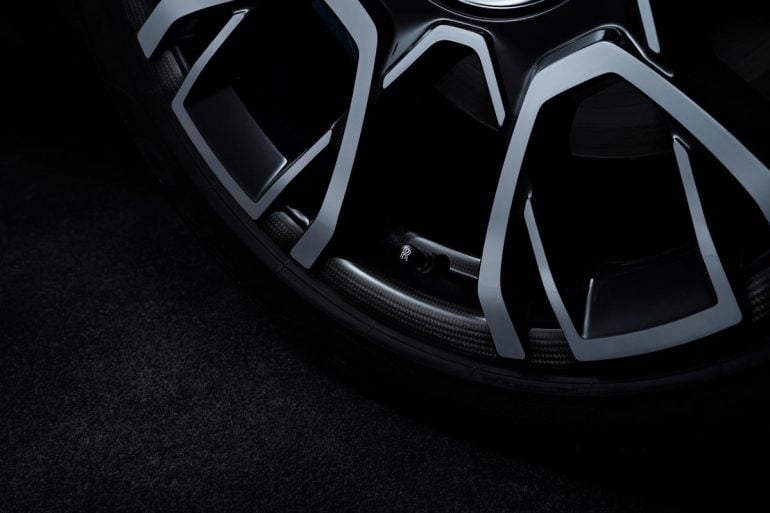 The luxury sedan’s twin-turbocharged 6.75-liter V12 engine has also been massaged to churn out more power. The engine in the Black Badge version produces 592hp and 664 lb-ft of torque. Even the 8-speed ZF gearbox and the throttle maps have been altered for spirited performance, braking bite point has been raised and pedal travel decreased for better brake feel. 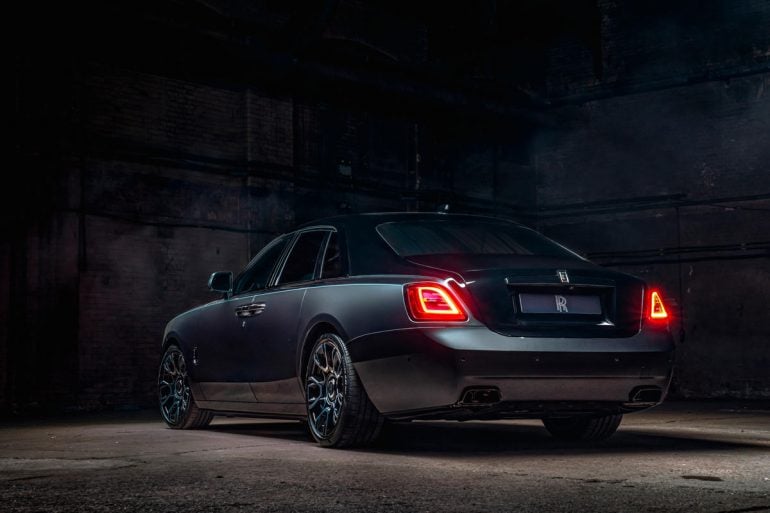 Torsten Müller-Ötvös, Chief Executive Officer, Rolls-Royce Motor Cars, said: “Today, we announce a product that represents a new kind of Black Badge motor car, one that seizes on the minimalist, Post Opulent design treatment that has recast the legend of Ghost but amplifies and subverts it with the application of black. Our most advanced motor car yet has been reengineered to characterize the alter ego of Rolls-Royce: assertive, dynamic, and potent. This is the purest Black Badge motor car in the marque’s history. This is Black Badge Ghost.” The pricing of the Black Badge Ghost is yet to be announced. 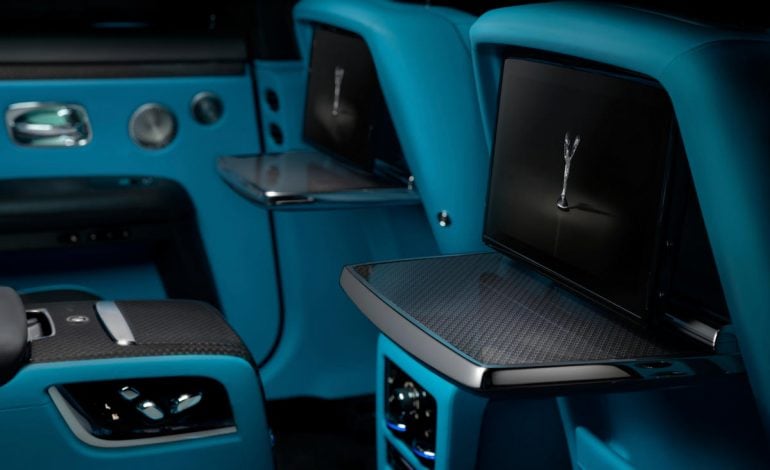