The partnership between Bovet and renowned Italian car design firm Pininfarina started in 2008 when the two brands joined forces to imagine a special timepiece in celebration of the 80th anniversary of the famous Turin-based design agency. And that’s how the Ottanta tourbillon was born in 2010. Since then, the partnership has spawned six special editions creating a collection of its own. The newest is the OttantaSei tourbillon (Italian for 86), which has been created to celebrate the 86th anniversary of Pininfarina. Only 10 examples of the limited edition will be made in Platinum, subtracted from the total of 86 movements the brand has committed to produce. 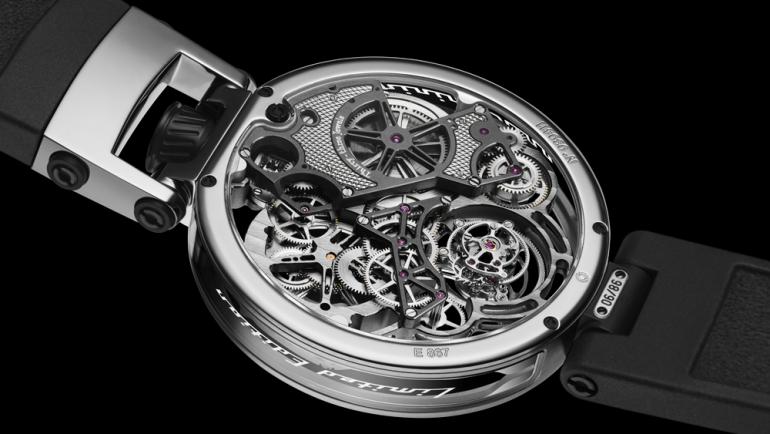 Unlike other similar partnerships between watchmakers and car brands, the Pininfarina designers and Bovet watchmakers joined forces from the very start of the project. Pascal Raffy, the owner of Bovet, emphasized the word “light” for the watch in two senses referencing both luminosity and weight. our sapphire crystals around the 44 mm diameter of the watch allow for the movement to be viewed at every dimension. It’s also the slimmest of the Bovet and Pininfarina watches with a thickness of 12 mm. To give the dial symmetry, the three mechanical groups of the time, power reserve indicator and the flying tourbillon have been given equal importance, and they occupy the same real estate on the dial. A single barrel keeps the double-sided flying tourbillon revolving for more than 240 hours giving the watch a power reserve of 10 days. A spherical differential halves the time it takes to wind the piece without increasing the torque of the winding system. The price is upon request, but we expect it to be close to the quarter-million-dollar mark.