If you thought acoustics didn’t have much to do with watch-making then Swiss watch manufacturer Breguet, is set to prove you wrong. After several years of research, the brand has become the first ever company to develop a timepiece around a predetermined sound. The Tradition Répétition Minutes Tourbillon 7087 features “an exceptionally pure sound and unprecedented tone” and will hit the market by the end of this year. 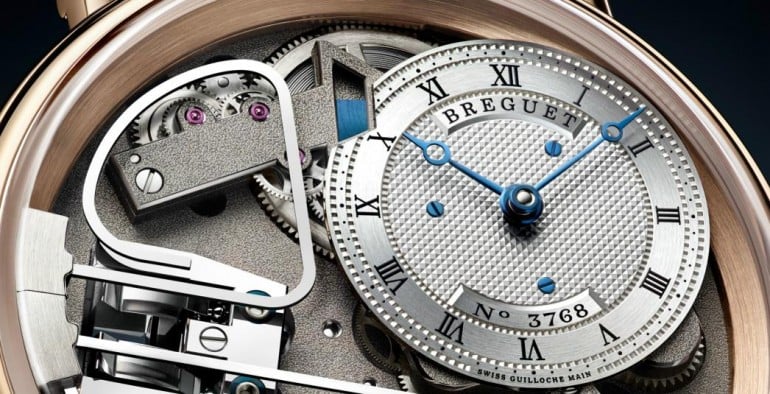 Breguet’s engineers used specially developed sound generators for experimenting with over 200,000 combinations of frequencies which were then classified into categories based on psychoacoustic criteria. After a careful listening, a sound was chosen that best met the development objectives. This sound formed the foundation for the development and construction of the model.

The watch is available with a white or rose gold 44mm case with double sapphire crystals and welded lugs with screw bars. Inside, the movement is a Swiss automatic Breguet in-house caliber 565DR with 58 jewels, 28,800 vph and a power reserve of 90 hours. It also has a minute-repeater, power reserve and 60-second tourbillon. Other notable features include a titanium baseplate and bridges, magnetic strike governor, bi-directional platinum winding rotor on the periphery of the movement, tourbillon bridge in titanium, inverted lateral lever escapement with silicon pallets and the Breguet balance-wheel on a Breguet silicon spring. It is adjusted to six positions.

The dial is silvered 18kt gold, engine-turned and offset at 1:30. Each timepiece is individually numbered and signed. An alligator strap with white or rose bold pin buckle is the final touch.