When Rolex decides to roll out a special edition timepiece, the world stops and waits with baited breath. Only recently, via the Bamford Watch Department (BWD), has one the world’s premiere watchmaker’s announced a couple of limited edition wrist watches that pay tribute to some of comicdom’s most legendary characters – Alex Raymond’s Flash Gordon and Lee Falk’s The Phantom. The company has already tasted success from their previous comic character edition timepieces that were also in collaboration with DRx (Darren Romanelli) in the likes of Popeye, Brutus, Beetle Bailey and even Snoopy (from Rodnik Band). 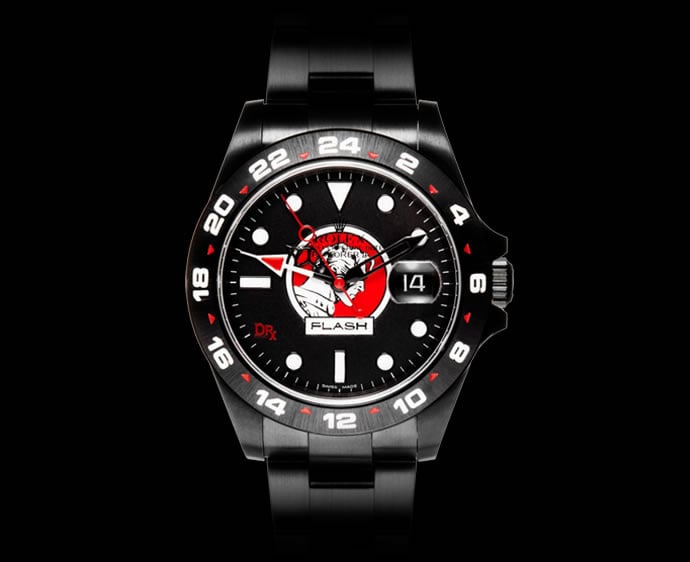 These new comic-edition watches help bring classic pop culture icons into perfect sync with the class act of a Rolex wrist watch in the forms of a Rolex Explorer II (Flash) and a Submariner Non Date (Phantom) models. Like the ones that came before, these two exquisitely crafted timepieces will also ship with beautifully crafted presentation boxes that includes numbered, custom comic strip posters and steel warranty cards. The Phantom edition actually goes a little further with the addition of hand-crafted (by The Great Frog) rings perfectly resembling those worn by the legendary crime fighter in the comic strips – The Skull ring for evil doers and The Phantom’s insignia for protection.

Both watches are created with Military Grade Titanium Coating (MGTC) making them just as hardcore as the characters they are commemorative of. They’re also totally scratch resistant. The limited edition number (of the series) and the DRx logo have been intricately crafted onto the rear panel. Although the pricing is yet to be announced, I’m thinking these drool-worthy collectibles from Rolex, would be priced in the $25,000-$30,000 range based on the prices of the previous editions.

Tags from the story
Limited-Edition, Rolex