At the 2015 Baselworld expo, luxury watchmaker Ulysse Nardin announced a new limited edition piece. Dubbed the Ulysse Anchor Tourbillon, the watch is the perfect blend of impressive technology and classic design. The watch uses a 44mm-wide case from the Classico collection and will be offered in either rose or white gold. The new model incorporates the constant Ulysse Anchor Escapement, a constant force escapement with a design that breaks completely with the traditional watchmaking approach. Made entirely from silicium, this constant-force escapement is the product of eight years of research by UN and a partnership with Sigatec, a company that produces silicium micro components. 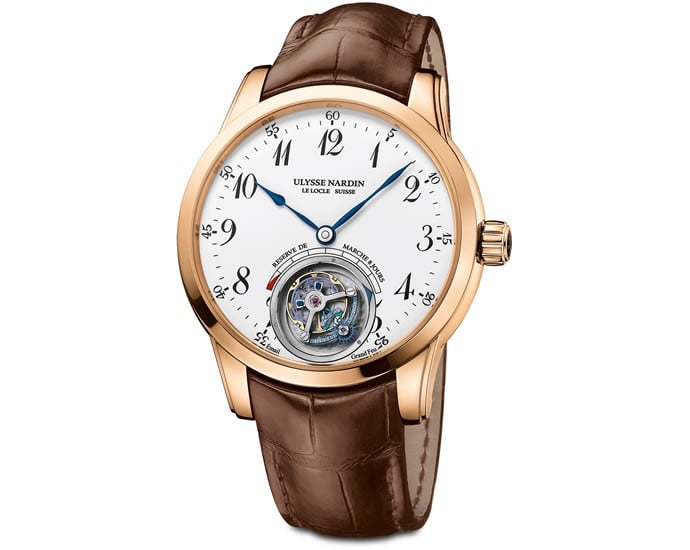 For the Ulysse Nardin Anchor Tourbillon, the company created the caliber UN-178 – a manually wound 3.5Hz movement with two barrels offering a minimum power reserve of seven days. Unlike the traditional Swiss anchor escapement, the new constant Ulysse Anchor escapement features a circular frame with a pallet fork fixed in the center, supported in space on two blade springs less than a tenth of the thickness of a hair in diameter. Mounted perpendicular to each other, these are subjected to a bending force that curves them and maintains them in a bi-stable state. The escapement has been further refined for additional efficiency by reducing the amount of force required for the balance wheel to push the pallet fork. The system creates excess energy that is used to keep the balance wheel at a constant rate. This entire system is housed within the tourbillon visible at six o’clock on the dial, along with the power reserve indication that is built into the dial around the top of the tourbillon. The Ulysse Nardin Anchor Tourbillon is limited to just 36 units, 18 Pieces in Rose Gold and 18 Pieces in White Gold. It will be available in May with a starting price of $84,000 USD.

Tags from the story
Baselworld-2015, Ulysse-Nardin