Someone needs to play the song ‘Memory’ from the Andrew Lloyd Webber musical Cats
loud and soon around former U.S. President Donald Trump. The music is known to calm the man down (according to former Press Secretary), and he certainly must be hopping mad after the latest hit in a barrage of misfortunes jostling him frequently these days to hit him. The unthinkable has happened (thanks Covid-19), and for the first time in 25 years, Donald Trump has not graced the prestigious Forbes list of 400 richest Americans. I have a feeling the man who is good with numbers must have seen this coming when he toppled by 300 points in the Forbes billionaire rankings after a loss of $1 billion. This year’s list has witnessed the man falling short of nearly $400 million from this year’s cutoff.

Trump still may be a billionaire worth a whopping $2.5 billion, but the fact that he has been down $600 million since the start of the pandemic has shaken his position on a list where his name resided since 1996. It must be difficult for Trump to part with the magnificent big-city properties he spent a lifetime building, but that hard step would’ve made him more moolah. All one hears is one problem layering over a previous one, debts, unpaid rents, lamenting employees, and languishing business strategies. Though Trump barely cut even last year at spot 339, the pandemic ensured he doesn’t celebrate a year more than his silver jubilee.
Experts believe Trump could have saved himself from the mounting debts, endless debacles, and toppling out of the Forbes list if only he made the most of a golden opportunity to diversify his fortune. Fresh off the 2016 election, federal ethics officials were pushing Trump to divest his real estate assets. Had he paid heed to their sagacious advice and divested, he could’ve managed feats like paying maximum capital gains tax, investing the rest into more comprehensive portfolios like the S&P 500, and still manage to be 80 percent richer than he is today. Listed below are the many reasons why Trump stands at the position he is at today, and it’s not favorable. The journey has been tumultuous, and we have it spelled out: 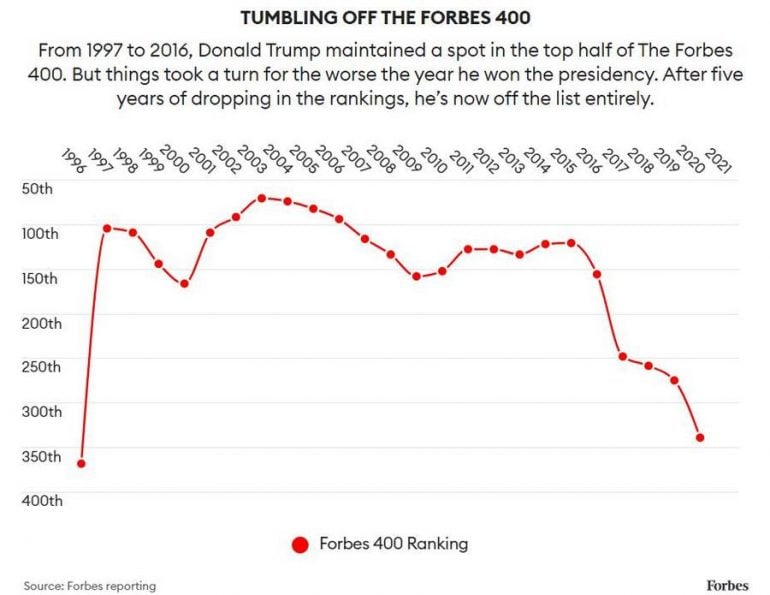 A massive $1.1 billion mountain of debt
It won’t be surprising to find the Trump name become synonymous with downfalls. Unlike other presidents who made money, Trump’s presidency cost him a fortune, and his wealth dropped by more than $1 billion from the time he took office. Going against the popular opinion of his trusted advisors, Trump kept the pandemic-affected business. If only he sold at the right time, he would be worth an additional $1.6 billion. Dan Alexander, a senior editor at Forbes who has tracked Trump’s business career, mentioned, “If he had sold everything on Day 1, paid the maximum capital-gains taxes on the sales, then put the proceeds into a conflict-free fund tracking the S&P 500. Trump would have ended his presidency an estimated $1.6 billion richer than he is today”. The hostile Jan. 6 Capitol attack also contributed heavily in impacted his business empire.


May have to bid adieu to the legendary Trump Tower NYC.
Situations have taken a further dip for Donald Trump as the man is left with little choice than to sell his three-decade-old Trump Towers. The iconic property, an architectural representation of ‘the 45th’, is left unredeemable due to mounting money problems. A $100 million loan on the legendary piece of real estate in midtown Manhattan has been placed on a debt watch list as vacancies in the building keep going uphill perpetually. Similarly, the Trump International Hotel & Towers along the Chicago River are in the same predicament. The building’s commercial retail space is now 95% vacant and has gotten Trump a $300,000 property tax cut this year.
Unending Woes of Trump Tower NYC Tenants
What happens when tenants of a towering 58-floor skyscraper in midtown Manhattan don’t pay rent? The tower begins to crumble as it has! According to a Washington Post report, not one or two but several prominent tenants at Trump Tower are failing at making ends meet owing to the pandemic, which translates into rents not being paid on time. As a result of falling behind on rent, entire floors have been vacated, with some mired in lawsuits. Marc Fisher Footwear occupied the whole of the 21st floor and parts of the 22nd floor at Trump Tower and owed nearly $1.5 million in unpaid rent. Suit-maker Marcraft Clothes and was behind by a staggering $644,000 in rent. The only tenant in accordance is Trump’s Make America Great Again PAC. Pac that pays nearly $40,000 in rent for office space on the 15th floor.
He is selling the crown of his hospitality empire – The Trump International Hotel Washington D.C.
Covid-19 thwarted Donald Trump’s plans to sell the iconic property as many hotels closed either entirely or partially in 2019. Trump hired brokerage firm Newmark Group to market the lease of the historic landmark that was awarded one of the most prestigious hospitality awards– the Forbes Five Star Award. Blame it on politics or personal opinions, but several corporate and international clients were unwilling to book rooms or events at the hotel. Rooms of the iconic property were running nearly half-empty even when the company put it up for sale.

Tags from the story
Donald-Trump, Forbes