Danish audio company Bang & Olufsen has debuted its first-ever soundbar called the Beosound Stage. It’s a bit of a surprise that the brand took this long to add a soundbar to its product range, considering the fact that it makes both high-end speakers and TVs. B&O did launch the soundbar shaped Beosound 35 in 2016, but it was always an all-in-one multiroom music system than something meant specifically to hook up to a TV for watching movies and television shows. The Beosound Stage was launched at the Venice Biennale, an annual art exhibition in Italy, and will come with a sticker price of $1,750 when it goes on sale later this fall. For that price what you get is some serious audio hardware packed in a sleek, beautifully designed body created by B&O collaboration with the Danish brand NORM Architects. What’s unique is that the Beosound Stage uses geometric shapes and natural materials in the design. 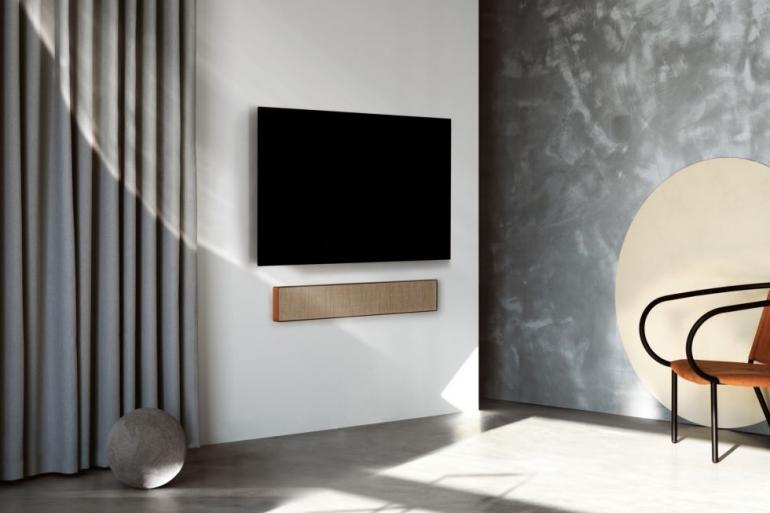 Talking about the aesthetics first, the Beosound Stage has an attractive flat design with the frame available in the choices of natural aluminum and bronze-tone aluminum. Add another $850 to it and you can opt for the third version in smoked oak, which in out opinion is the looks the best. On the inside, the Beosound Stage features a three-channel sound system with 11 drivers that each have a 50-watt amplifier, which includes four 4-inch speakers designed to reduce distortion to further enhance that low-end tone, two 1.5-inch drivers for mid-range sounds and a pair of 3/4-inch dome tweeter for 3D-surround effect. The speaker is Dolby Atmos-capable that includes support for Dolby TrueHD. In addition to the HDMI ARC port for connectivity with TV, the Beosound Stage comes with AirPlay 2, Chromecast, and Bluetooth 4.2 for wireless connectivity and connects to B&O’s multiroom BeoLink speaker system.