The lunar lander of the Apollo 11 mission carrying Neil Armstrong and Buzz Aldrin landed on the moon exactly 50 years back. To commemorate this occasion, Hasselblad has announced a special edition camera kit that includes the recently announced 907X body and CFV II 50C back. The two astronauts aboard the lunar lander were accompanied by a custom-made Hasselblad Data Camera (HDC) and an Electric Camera (HEC) that were used to capture pictures from the surface of the moon. A third Hasselblad HEC was stowed in the Command Module with pilot Michael Collins and was the only one which made back to the earth. The special edition 907x body is finished in matte black, matching the finish on the HEC that was brought back to earth. As a nod to the cameras that were left on the moon by Neil Armstrong and Buzz Aldrin, the special edition has a plaque on the side that reads “On the Moon Since 1969.” 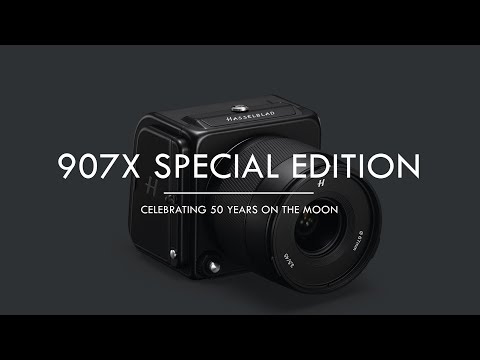 The 907X supports modern mirrorless X lenses, but the classic V lenses like the ones that were a part of the Apollo 11 mission can also be used with the help of an adapter. Other than special finish, the lunar edition doesn’t feature any improvements over the regular 907x and CFV II 50c. Hasselblad hasn’t announced a launch date as of yet but the special edition kit will carry a price tag of $7,499 when it goes on sale.