Trust Victorinox to come up with an army-knife so useful that you could pretty much carry a terabyte of data around, with the regular screwdriver, corkscrew, and fold-in scissors. Debuting at CES 2012, this Victorinox piece comes with a flash drive with 1 terabyte worth of space, enough to store a bunch of songs, movies, and the like. The connector, in particular, is compatible via both USB2.0/3.0 and eSATA. The thumb drives integrated into this army knife sports an LCD screen that allows you to display custom messages and low-resolution pictures. It shows you just how much memory is occupied. Priced at a whopping $3000 for the top-notch version, this one’s also available in 64GB, 128GB, and 256GB and is a one-of-a-kind Victorinox knife that’s more than just an outdoorsy accessory!
[One more image after the jump] 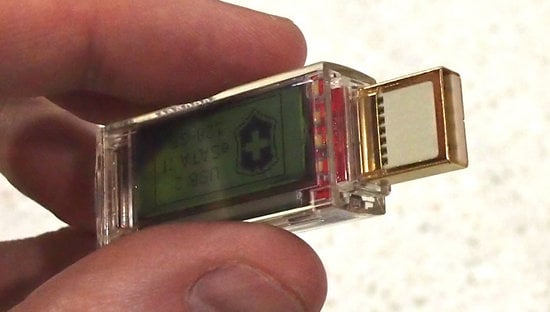 Tags from the story
CES, Flash-Drive