India’s very first Porsche 911 GT2 RS has been delivered in Bengaluru. Following its international launch in February this year, the fastest road-legal racing car by Porsche was introduced in India last month with a price tag of Rs. 3.88 crore (ex-showroom). The 911 GT2 RS was purchased by Boopesh Reddy, one of India’s most prominent car collectors. The Bengaluru-based businessman’s newest acquisition joins a long list of exotic and uber-rare supercars. Reddy’s collection, which he calls the Bren Garage, has some of the world’s most desired supercars like the Aston Martin DBS, Lamborghini Huracan, Porsche Cayman GT4, Mercedes-AMG GT R and Ferrari 458 Speciale. He also has India’s only Porsche 911R – one of only 991 examples that were ever built. 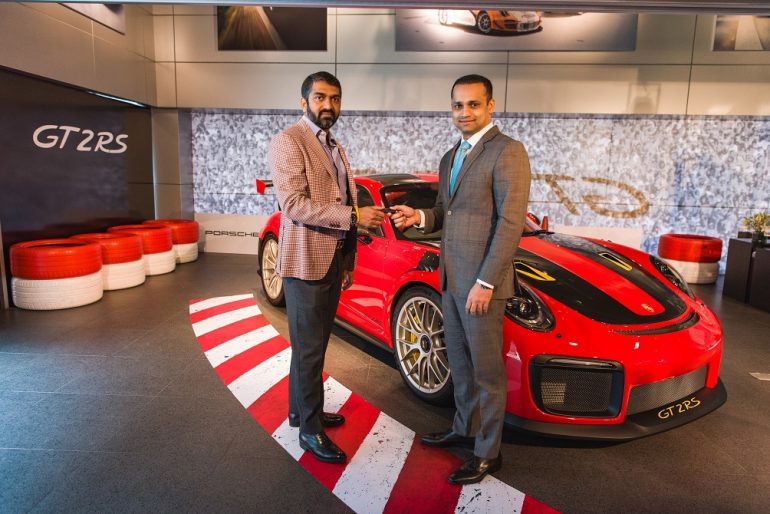 The Porsche 911 GT2 RS is the fastest road-legal car ever built by the German automaker. The track-focused racing car is powered by a 3.8-litre flat-six engine that produces 686 bhp and 750 Nm of peak torque. The engine is mated to a 7-speed dual-clutch transmission that sends the power the only the rear wheels. The 911 GT2 RS is capable of going from zero to 100kmph in just 2.8 seconds and hit a top speed of 340kmph. The racing car by Porsche is so fast in fact that it was able to dethrone Lamborghini Huracan Performante last year to become the fastest production car to lap the Nurburgring. It posted a blistering lap time of 6:47.3, which is almost 5 seconds faster than the Lamborghini and 10 seconds faster than Porsche’s own 918 Spyder.