Bengaluru’s very own Asian Gastro Bar just came to Mumbai with a grand opening to celebrate the goodness of Oriental cuisines! Suburban Bandra just added another gem to its collection: The Fatty Bao!

The joint is quiet spacious though, at first glance it looks a bit like most of its space is being hogged by next door brother gastro bar The Monkey Bar. The Fatty can easily seat around 20-30 people and has both – in-door and out-door seating arrangements. The high-seaters and tables out front give the place a pretty casual feel, though you could come here for a formal dinner and be seated inside, towards the back.

Pastel green walls with red door and window frames along with wooden furniture are the base décor while themed murals, to match the cuisine, decorate the walls. The colors give the restaurant a very Asian theme; though the graphic, pop-art, hand painted on the walls, lighten the mood and style to add a bit of quirkiness. We can see this place turning in to a popular hippie hangout!

We love that the staff too were on board with the hipster vibe! The green tees and red-suspenders go great with color theme of the restaurant. But not only that, they were courteous and prompt! 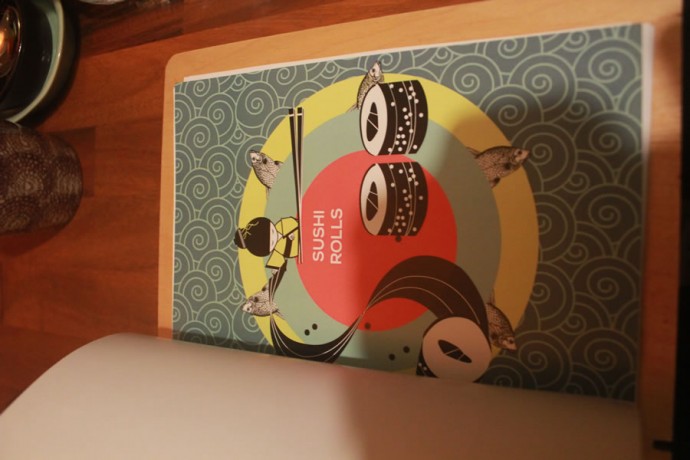 The menus too, were a reflection of the murals and the Asian pop-art décor. 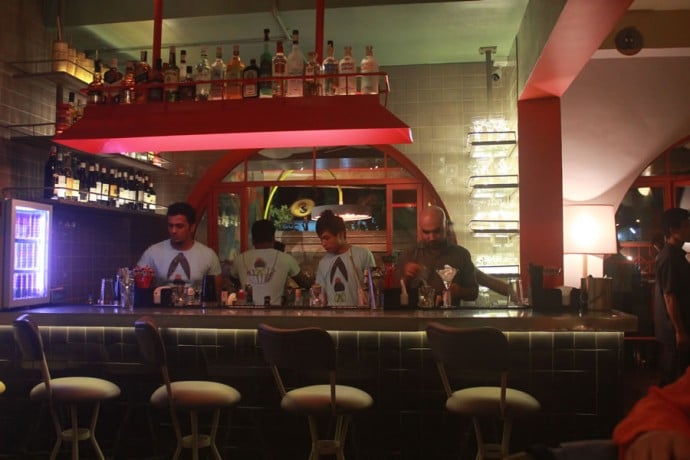 The well stocked bar goes along with the extensive bar menu – on which one can find a wide range of imported wines, aperitifs and signature cocktails. 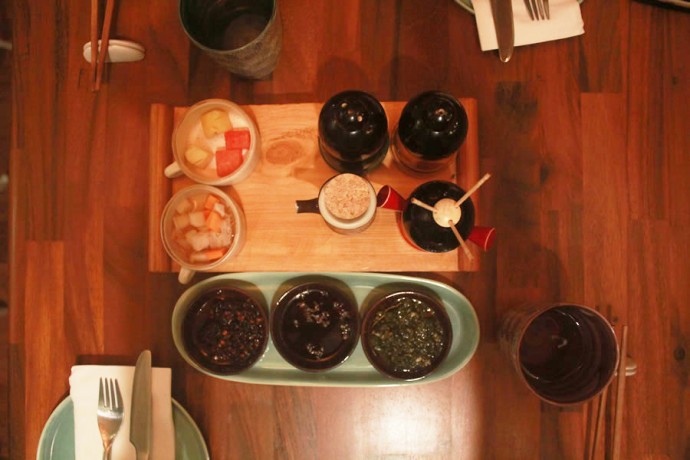 As we sat down at our table, we noticed the cute little arrangement of sauces and pickles, along with the wooden Chinese doll salt and pepper shakers and toothpick holder. Fatty definitely gets plus points for cuteness! 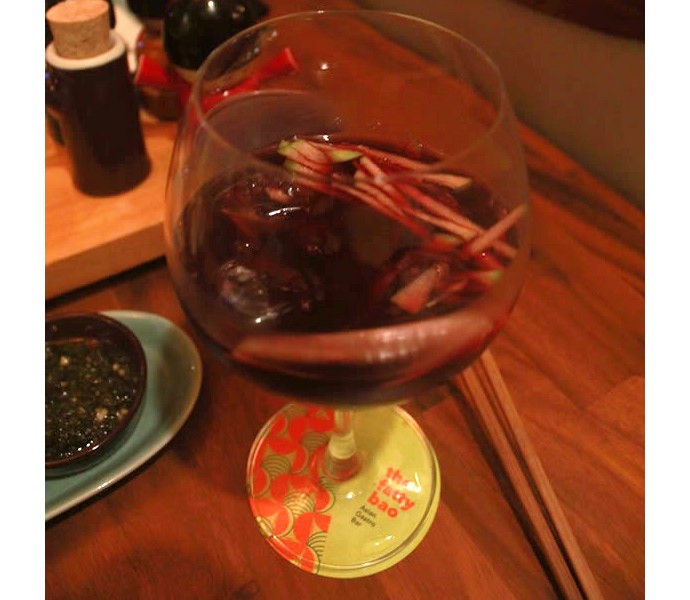 We started off with the seven-spiced Sangria that was an infusion of sweetness along with crunchy pear strips. 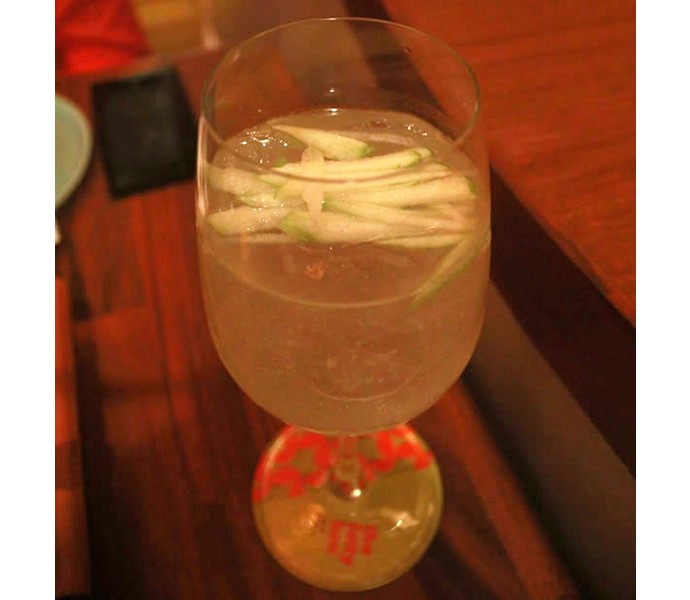 The Bora Bora too was topped with floating fruit but tasted more of a vodka-gin mix with hints of passion fruit, green apple and coconut water – pretty tropical for an Asian restaurant, but who’s complaining? 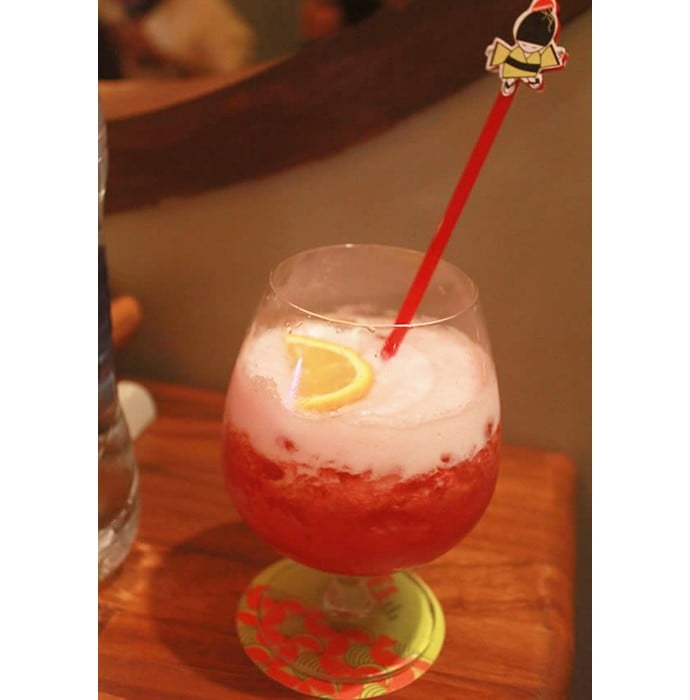 On recommendation, we also tried the Fatty Sour; and thank goodness we did! The whiskey based cocktail had cranberry juice along with egg whites along with a tangerine wedge and had the most exotic, fresh flavor we’ve ever tasted! If anyone says they’ve been to The Fatty Bao and not tried the Fatty Sour, they will be judged! If it’s the egg whites you’re worried about, just remember, it’s not as gross as it sounds and it doesn’t really add any flavor, except for the white foamy layer. Also, its optional. 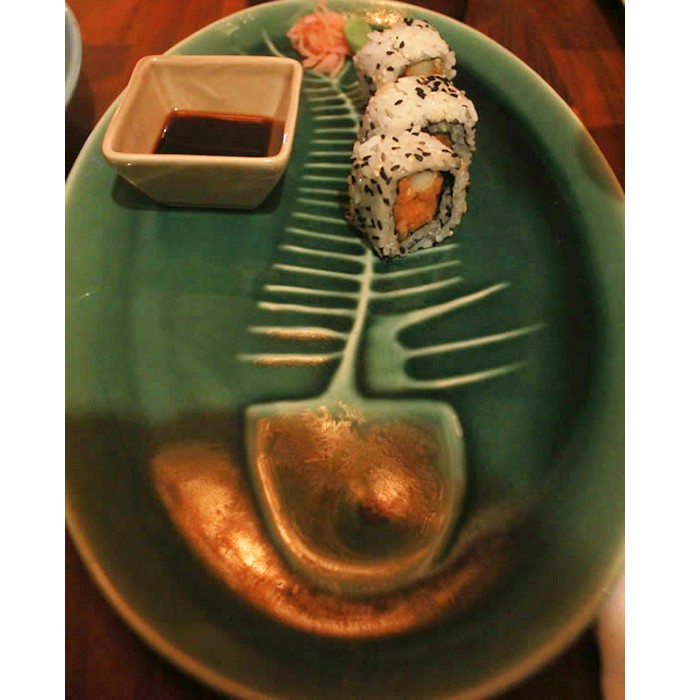 For appetizers we got a Spicy Salmon and Dill roll, which to be honest, didn’t have a ‘wow’ factor. But then again, it isn’t one of their specialties. The menu doesn’t have that many to choose from too, which makes it easy to skip it. 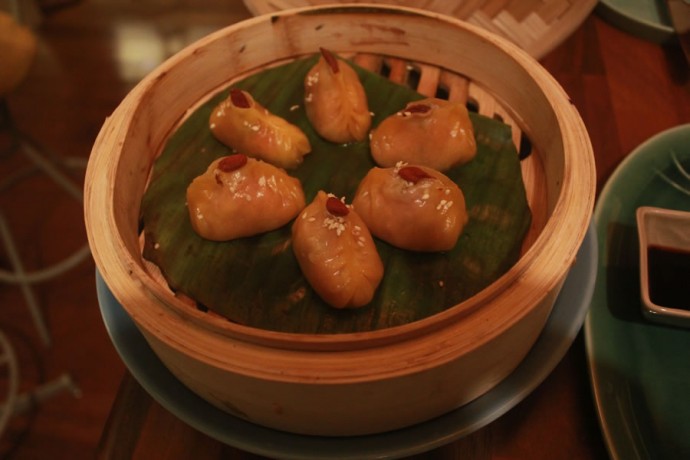 We also got a serving of the Chicken and Jalapeño dumplings. We waited for the Jalapeños to kick in, which they never did; so this makes for a good safe option for non-spicy eaters. 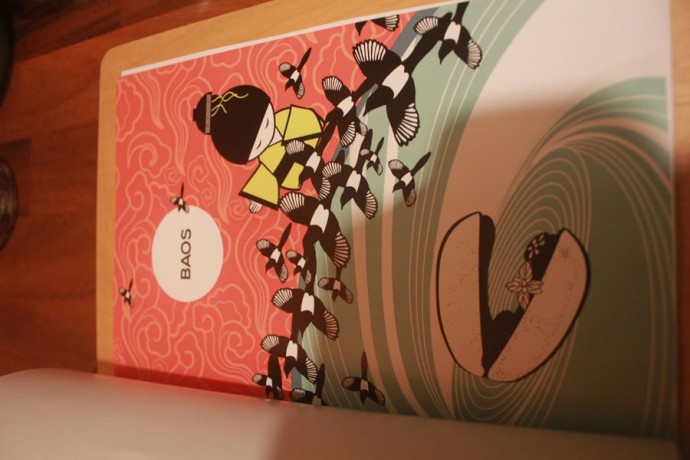 Up next was inspiration behind the restaurant’s name of this restaurant – the bao. For all that don’t know, the bao is an open-faced steam sandwich of sorts. The filling can be anything from vegetables to meat. The bao is a part of Chinese cuisine, but has also been found in Indonesia. 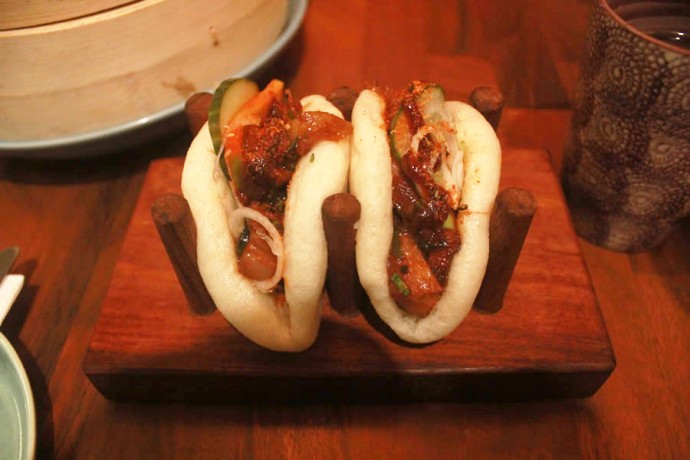 We got the Char Siu, which is usually the most common, filled with BBQ pork belly pieces that are then mixed with the sweetish hoisin sauce and sesame oil. 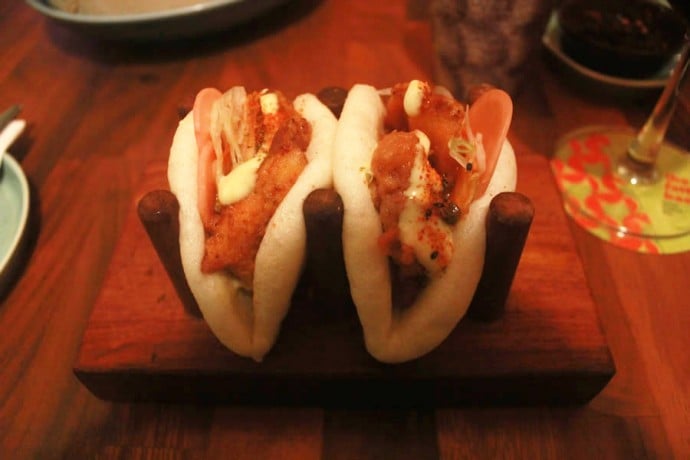 Spicy Fried Fish is the second bao we ordered. This one was filled with deep fried crispy coated sea bass fillets and pickled cabbage and then topped with some spicy mayonnaise. 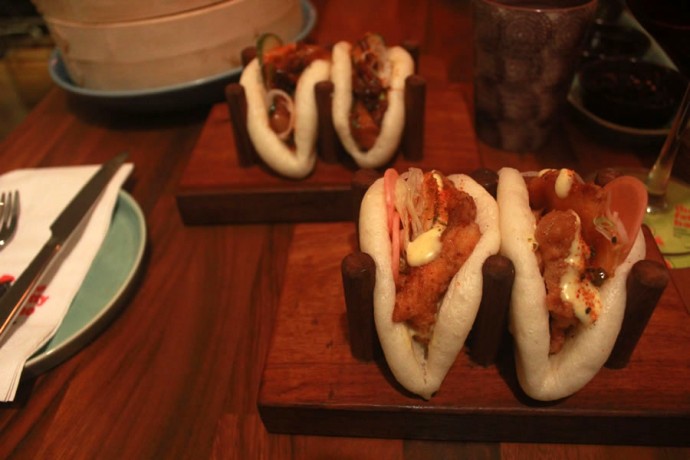 The soft slightly sweet bun compliments the savory fillings, making it an extremely pleasant experience for the taste buds. The Fatty Baos were definitely the best variation of a sandwich we’ve ever tried! 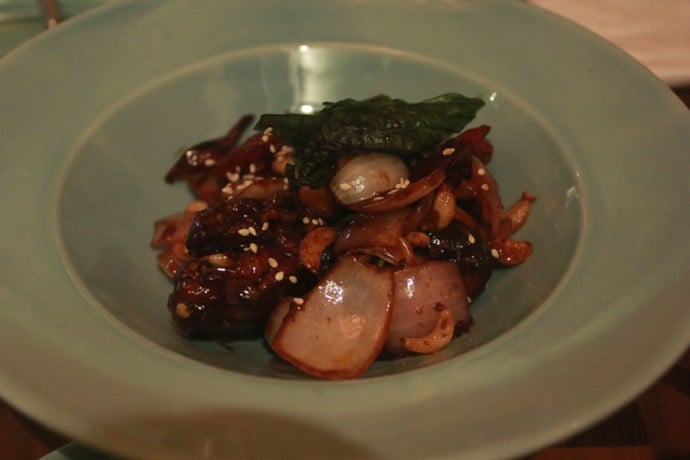 For mains, though you could choose from multiple combos of rice or noodles and curries, we opted for our one of the ‘Small Plates’ dishes – Three Cup Chicken. The chicken was stir-fried in soy sauce, sesame oil and rice vinegar along with dried chillies and basil in Taiwanese style. The dish was overall quite excellent with regards to taste and light on the stomach after the baos; though having to pick of your meat from the bone with a fork wasn’t the most enjoyable bit. Call us picky eaters! (Pun intended) 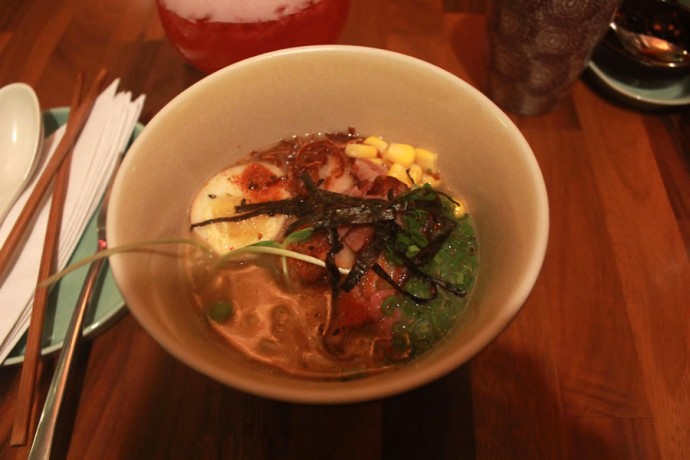 It was the Chasu Ramen though, that caught our hearts. Ramen being the noodle soup goodness that it is, was cooked with pork stock and braised pork belly and bacon along with bean sprouts, scallions, corn and boiled eggs. The pork belly was soft while the bacon bits were crispy; both cooked to perfection, gave the soup and the rather blandish sprouts the right amount of saltiness, which was then balanced out by the hard boil egg. The Chasu Ramen came highly recommended, marked as one of their specials and we’re glad we tried it! 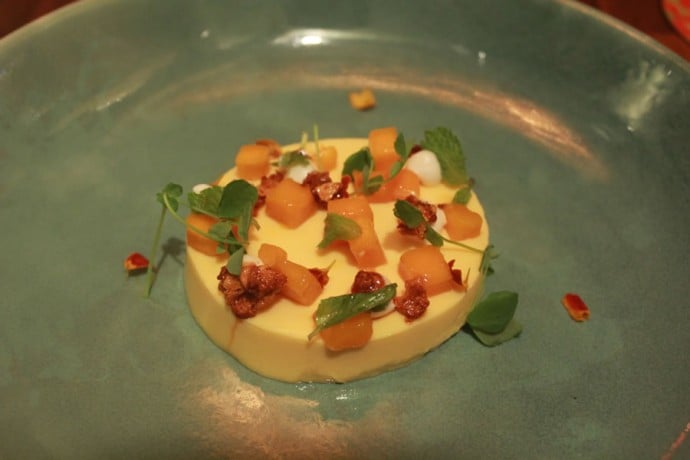 Moving on to our last course, for desserts we got the Pannacotta which was mango flavored and creamy – the kind to melt in your mouth! It was topped with actual mango pieces, mint leaves and caramel bits that added the right amount of crunch. 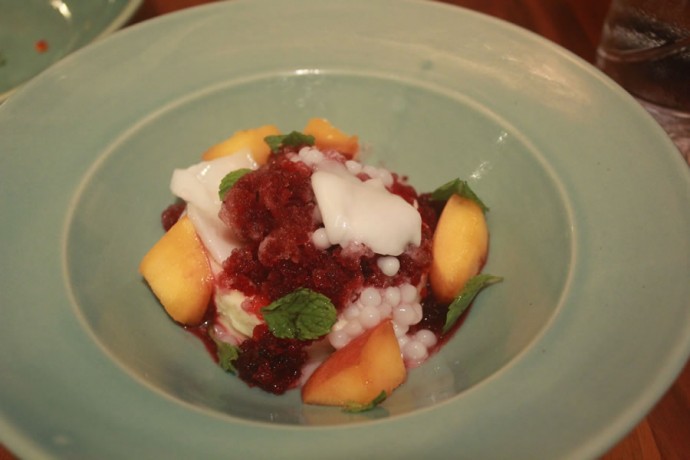 The Hibiscus is made of vanilla parfait, coconut, tapioca and hibiscus granita – which is basically a frozen puree mix of hibiscus tea and syrup. The vanilla parfait made for a good flavor that blended in well with the fruity counter parts to also make for a very tropical-feel dessert! It was definitely as interesting as is sounds; so don’t miss the chance to try it! 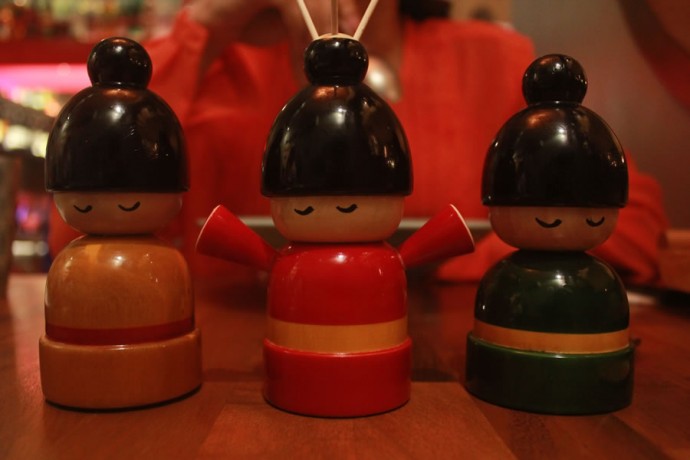 Overall the service was great! Our orders came quicker than what we’re used to, which made us wonder if it was just because they had to put on their best game since it was newly opened. Whatever it is, we hope they continue to move at the pace they were! We were thoroughly impressed. The restaurant serves great sized portions; not too much but not to stingy either. There’s also quite a lot of place to move around, so don’t be surprised if you see someone break a move. In all, it’s a good blend of casual and chic and also a good place to get some authentic east-Asian cuisine! 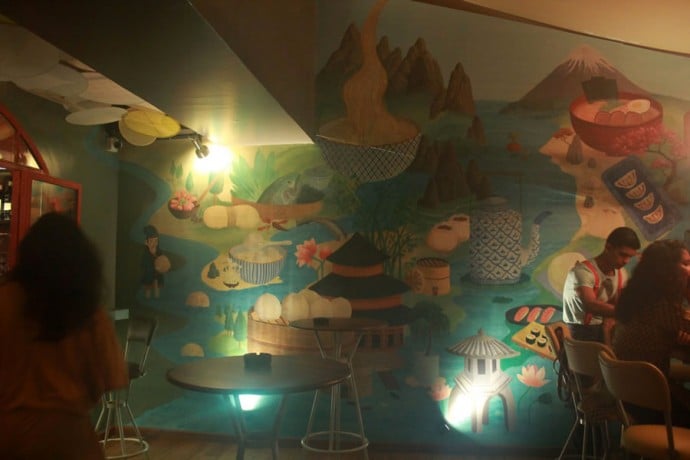 As for the food, we had happy stomachs after everything that we tried. The food was a good combination of staple ingredients cooked differently, the result of which was great flavors and an extremely exhaustive menu. We would recommend the Chasu Ramen to anyone looking out to try something familiar with a new take! We would also suggest skipping over the sushi and going straight for the baos as you have great variety to choose from. Desserts are not to be skipped; and of course you have to get the Fatty Sour without any second-guessing. You can thank us later!

ALSO READ -   Review: A taste of the ravishing Pat-A-Cake by Namrata & Sapna