One of the biggest problems of owning an extremely expensive and rare car is that you’ll have to live with the constant fear of getting it damaged by morons on the streets, especially the vindictive, destructive kind. You park it somewhere for five minutes and come back to find a scratch or a dent ruining the expensive bodywork. Thanks to the age of viral videos, pranksters in the hope of becoming an overnight internet sensation pull off stunts which are outright obnoxious. A video has surfaced online where a crazy prankster can be seen running over a Lamborghini supercar. However, he got an instant dose of karma by getting slammed on the road. 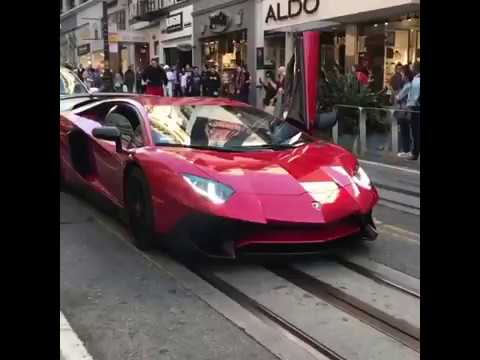 The owner of a red Lamborghini Aventador SV who had parked his vehicle in a San Francisco street got a rude shock when he found a rucksack-wearing man run over his $420,000 supercar. You can see the owner try running after the miscreant. The prankster is however tackled in the air and knocked down in the middle of the street by the owner when he tries to repeat his stunt. After a few moments of profanity-filled shouting and commotion, the owner then drives off when the crowd steps in and encourages him to leave. Have a look at the video tell us if you think the owner’s actions are justified or not.