Burt Lancaster stayed here but he didn’t confer his name upon Hôtel Lancaster which were named after all the celebrities it has hosted would have a straggling multi-barrelled name concatenating Liz Taylor, Richard Burton, Grace Kelly, Humphrey Bogart, Clark Gable, Mick Jagger, Jeremy Irons etc etc etc. Tina Turner seems rather an aberration at so demurely discreet an address like Hôtel Lancaster.

Having been the receptacle of a fleet of cinematic personalities, the Lancaster cannot but have an element of the dramatic about it and engaging Front Office Manager Christophe Lajoinie narrates in his inimitable style the shenanigans staged here by Hollywood stars. His favourite scene (in every sense) is how Liz Taylor and Richard Burton fought famously on the hotel’s grand staircase.

Although it has long been a galactic recipient of stars and is a Leading Hotel of the World the 56-room Hôtel Lancaster remains a Parisian secret to which the initiated few are privy. Avowedly, not on the loveliest of streets but just off the top of the Champs Élysées, close to the L’Arc de Triomphe, the hotel is conveniently located for those avid of the glitz and swarm of the vicinity. This part of town appeals little to me but Paris’s most glamorous street Avenue Montaigne is a little way down the Champs Élysées and a short walk from the hotel takes you to Le Grand Palais, Petit Palais and other monuments renowned for their art exhibitions. The Louvre is 10 mins down the road and Le Musé D’Orsay 10 mins across the Seine (depending on how fast you walk, of course).f

A converted old 1925 hôtel particulier that has had many owners (including London’s Savoy group of hotels), the Lancaster was recently revamped to bring taste to tradition. An astonishing collection of antiques and original artwork is showcased emphatically but not obtrusively in a modern context. The hotel retains a quaintness but doesn’t look “dated” like many other hotels of its kind, perfectly equilibrating as it does the classic and the contemporary. 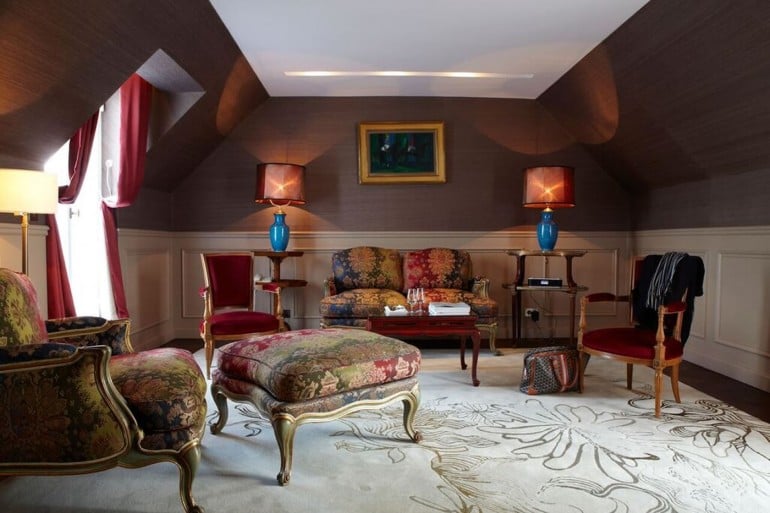 Christophe is impassioned of the Lancaster and there seems nothing he enjoys more than whisking you on a tour of his suites, expatiating with joy on the intricacies of each artefact much like a museum curator would. He doesn’t fail to mention with pride that all rooms stock exclusive Clairans toiletries. He has displayed his suites and I profess a preference for the rooftop Suite Deluxe 800 with its divan upholstered richly in red, blue and green and offering terraces with views of the Eiffel Tower as well as Sacré Coeur. Christophe tells me the 800 mine and moves me from my luxury room with a beautiful fire place to this grand suite. 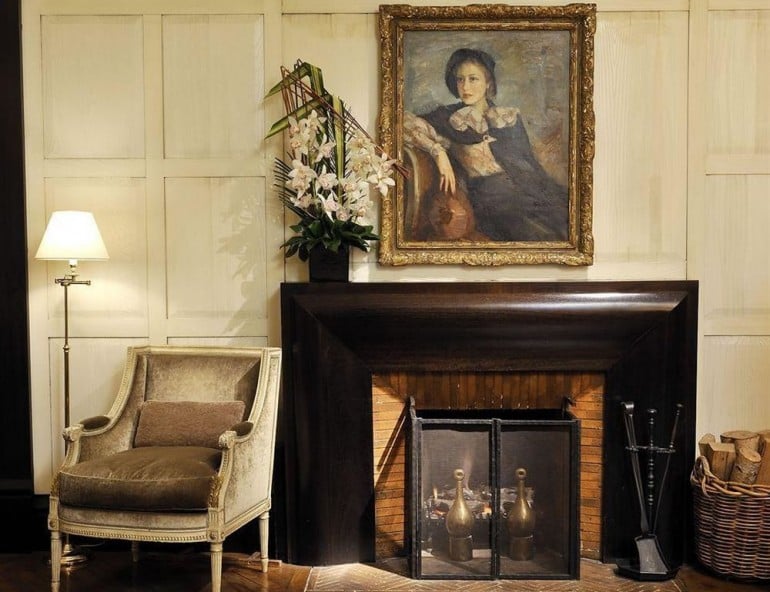 Christophe also has a tale about the portrait of a woman hanging above the fire place by the Front Office whose identity he claims has generated vociferous arguments between guests, each contending he/she knows the lady, ever a mystery, “quite like the Mona Lisa,” he compares. Christophe’s favourite painting is the massive one of the Bataille de Fontenoy in the private meeting room and he relates with such animation the amusing anecdote related to it of which I shall say nothing as this is surely Christophe’s prerogative.

The Front Office Service is a treat. And the Concierge is exceptional, each man as cultured as he is charming and efficient. Young Mathieu can talk intelligently and energetically about art and recommend esoteric exhibitions to visit whilst Head Concierge Eric is charm incarnate. He has been at Le Lancaster 20 yrs but winks sssshhhh…. don’t mention it or it will betray his age. One can only respond that like Peter Pan he seems endowed with eternal youth!

Le Lancaster’s 2-Michelin-Starred restaurant La Table du Lancaster is attired in smart silver grey and mustard. A Russian artist, great lover of beautiful women, according to Christophe, once sojourned longly at Le Lancaster and paid his bills with 83 paintings of gorgeous women, one of which is the aforementioned Mona Liasesque portrait at the reception and some of which adorn the magnificently chandeliered restaurant overlooking a terrace with a marvellous mirrored wall. Chef Julien Roucheteau’s colourful cuisine includes friable, vibrant amuse-bouche so delicately textured. Miss not the cheese trolley that has some pungent gems and varietal goats cheeses but the real discovery is girl sommelier Vinciane, aptly so called for her name recalls vins, the French word for wine. Vinciane debuts with Saumur blanc “L’insolite” Domaine des roches Neuves 2010 thus heralding the “insolite” (unusual) and embarks me on an intriguing pairing including unusual numbers like Corsican Patrimonio and a mature Jurançon moelleux “Marie Kattalin” Domaine de Souch 2008. To finish, a Spanish Montilla Morilles Domaine Toro Albala 1983. After the first glass I joke Vinciane is a prize-winner. She responds she is indeed a prize-winner, although just out of wine school. Over 7 courses the glasses at my table proliferate, I retain all to compare wines at the end of the meal as guests, fancying they’re amidst a great wine connoisseuse, are inspired to command wine themselves. But a distinguished Venezuelan couple (advertising magnates) sitting beside me also remark that a table of black guests perhaps received an arched eyebrow on requesting wine and a tad less attention than the rest of us did. If this entry seems rather desultory, it’s because I haven’t quite recovered from all those wines…

But that doesn’t mean I eschew the bar, on another day, I hate to admit… The silvery grey and blue bar with splendid portraits and a handsome 18th Cent clock (one of many at the hotel) adjoins the restaurant and overlooks the courtyard terrace. Barman Elmeo Friot can customise cocktails on Tuesday evenings, although we recommend the Lancaster classics, especially the champagne cocktails that come with crisp mixed nuts and wonderful olives. There’s a nice bar food menu too and the cheese platter is a worthwhile option. Miss not the flake-at-touch, myriadly-layered millefeuille pastry. If you don’t got to bars for pâtisseries, well, we recommend you do to this one!

Breakfast is the first meal of the day and the last word on a hotel. Breakfast at Le Lancaster, for all its culinary excellences, rather disappoints. The 2-Michelin-Starred restaurant, where breakfast serves, flooded with gay sunlight, is resplendent in the morning, contrasting with the dismaying nocturnal visage and saturnine demeanour of breakfast staff, the mechanical, morose young steward in particular comports himself with a certain scorn, and looks somewhat pained were he requested a refill of juice or anything at all. Ask if you could have some blue cheese and he says the restaurant doesn’t serve it at breakfast. Remind that it was on the buffet the previous day he says curtly it isn’t on today. Requested to check if the kitchen might have some he says they have exhausted the entire stock (which minutes ago he denied the existence of anyway). Breakfast itself is pedestrian and one wonders that a kitchen that excels in pâtisserie cannot produce better vienoiserie. The breakfast buffet is succinct, which I don’t condemn, but the effete, etiolated unattractiveness of offerings troubles. Dry fruit, fruit, salads and confectionary breads are of indifferent quality, negligently presented almost as if breakfast were an incidental interlude before the restaurant assumed its gastronomic avatar by lunchtime. 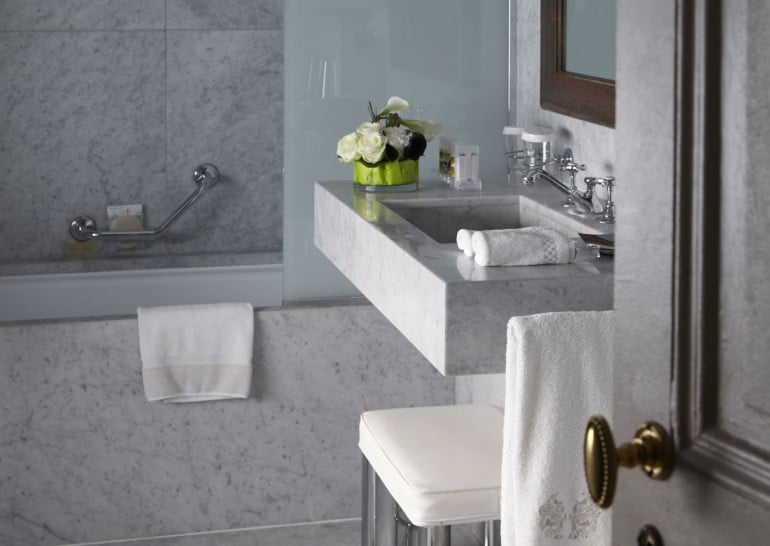 The dichotomy between the swift and suave Concierge and Front Office staff and the listlessness of breakfast staff is striking. Housekeeping staff too visit you in your rooms promising to attend to your grievances but in the entire time I spend at Le Lancaster the heating on the bathroom towel rail isn’t mended and the bathroom, superbly marbled though, is chilling like a fridge (a radiator is eventually supplied) and the music system isn’t set on the classical music channel I request.

Nevertheless, I have 10 kgs in excess and the airline’s severity about it (Eric at Concierge called the airline several times for me), a member of housekeeping on the morning of my departure helps weigh my bags, discard redundant material until my protuberant bags are dieted down to acceptable proportions and zipped up, providing a carton in case I’ve to remove anything at the airport and send back to the hotel for a friend to come fetch and keep for me.

Eric also ensures I am deposed in grand style at the airport, invoking Paris’s oldest and most prestigious limousine company Chabé for the transfer. The Lancaster has a close association with Chabé with whom you can book your preferred car and even the chauffeur of your choice, retaining him throughout your Parisian stay or, availability permitting, on all your Parisian stays and for excursions within France and even abroad. On the airport drop the chauffeur accompanies you to check-in and wheels your trolley right up to Security Check when he must finally bid you goodbye. Eric has me fixed one of Chabé longest and most lavish Mercedes limousines (the Rolls Royce was a tad too large…) with one of their savviest chauffeurs, such are the wiles of the impossibly efficient and extremely endearing Eric.

You’d do well to stay at L’Hôtel Lancaster for its plush suites, the world’s poshest limousine service Chabé and Paris’s most promising young sommelier whose youth and zest are emblematic of the historic old establishment’s eternal rejuvenation. But I’d stay at the Lancaster just to avail of the insuperable Concierge and for the unforgettable Christophe’s entertaining anecdotes.

Note– The author was a guest at the Hotel Lancaster. But the opinions expressed are her own.