Back in May this year, Bentley announced it’ll make Le Mans Limited Edition Mulsanne and Continental Models to celebrate the 90th Anniversary of the Le Mans 24 Hours endurance race. Today it has released the first set of renderings of the Le Mans edition of Mulsanne painted in British racing green. The British automaker has also announced that they will showcase the Mulsanne Le Mans Edition alongside several other models including the Flying Spur, Continental GT Speed, Continental GT3 and the Le Mans-winning Speed 8 at the Pebble Beach Concours d’Elegance this weekend.

The special edition Mulsanne is garnished with two-piece five-spoke alloys, sports suspension and steering, diamond-quilted door panels and leather seats, and drilled pedals made of alloy to make it stand out. There six new Le Mans Limited Editions have been named after legendary drivers from Bentley’s six victories at the Le Mans 24 Hours race and will come in 6 different interior and exterior color combinations. 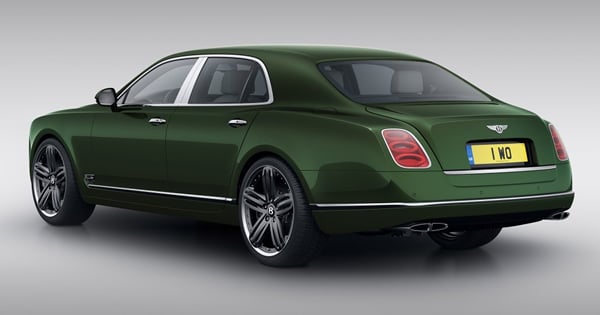 These limited editions are headed exclusively for North America and will go on sale later this year. A few exotic vintages Bentleys will also be auctioned off at the Monterey Bay auto festival, including a 1931 4.5-liter Supercharged Le Mans, a 1932 8-liter Saloon, and a 1937 Bentley 4.25-liter Concealed Head Coupe.