The Rolls-Royce Phantom seems to be a tuners muse, as well as the maker’s fetish, as much as it is on people’s wish list. I mean, from Kahn, Bijan, Project Kocaine, Rusnak everyone has tried their hands on the car. Then there are the carbon fiber wraps, gold trimmings, and solid gold ones too. And there have been a few disasters as well. But, if you love the Phantom enough that you can’t live without it, then you probably don’t have to make such a big sacrifice. Custom hearse builder Biemme Special Cars has come out with the “most luxurious and expensive funeral car” called the Rolls-Royce Phantom Hearse B12. The final journey car will be launched at the Tan Expo funeral home show in Bologna, Italy.

The vehicle is 23-feet long 4-door car that also sports the “suicide” doors (no pun intended). The car features a Rolls-Royce 6.75-liter V12 engine, with a self-leveling air suspension. While there is no sale price mentioned as yet, but it is speculated to be around €500,000 ($662,000). From the free spirited to a free spirit, let’s hope those taking this final ride don’t come back to haunt the living! (Considering that their last ride was on a ‘Phantom’) 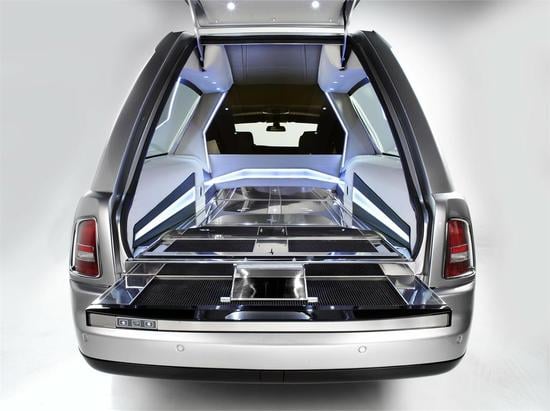