In a bid to keep check on climate change, hybrid technology is being aggressively pushed as the alternative to purely gasoline powered engines. In a few years time, we will even have aircrafts with hybrid technology to make air-travel more economical and environmental friendly. And now, we have the world’s first superyacht with hybrid technology. Feadship, the prestigious Netherlands-based yacht builder, on Saturday launched “Savannah,” the world’s first true hybrid superyacht. The 83.5m (274ft) superyacht not only boasts a novel power plant, but is also the first to be entirely metallic painted except for the mast domes. 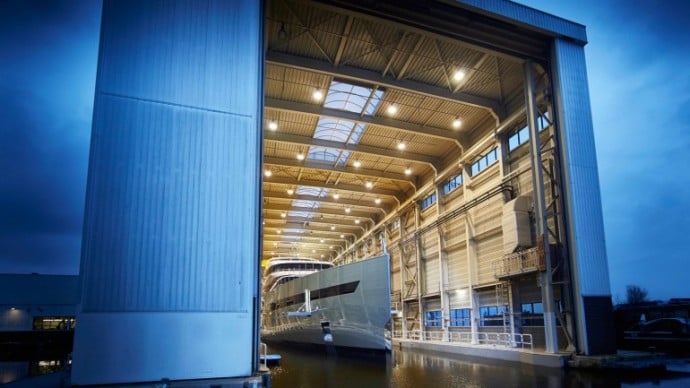 From the outside, the Savannah looks similar to most of the megayachts of its size, with five stories, a swimming pool and massive decks. However, the luxury ship is powered with a highly advanced power system that comprises of a single diesel engine (instead of the usual two), three diesel-electric generators and a cluster of one million Watts of Li-ion batteries. The hybrid system along with an azimuthing thruster and a streamlined hull shape result in fuel savings of 30 per cent in comparison to other similarly sized yachts. The streamlined hull has a superstructure that uses glass, composite panels, polished stainless steel strips, aluminum supports, and teak. “The possibility to choose between diesel, diesel-electric or fully electric is truly exceptional,” says Savannah’s captain Ted McCumber. It also features a nine-metre swimming pool, an “underwater lounge” at port side, where guests can watch fish swim past, and a cinema. It took three years to complete the ship and will be delivered sometime in the spring.

Tags from the story
Hybrid, Yacht