Hollywood has always been the inspiration for many young men to purchase goods and most luxury goods. Thus it should not come as a surprise that Triumph and TAG Heuer have collaborated to create the Bonneville Heuer motorcycle. The Bonneville Heuer motorcycle is inspired by ol’ McQueen and the Porsche 917 K, which he rode in Le Mans. It comes with a gulf Oil blue and orange scheme, and I am sure most Steve McQueen fans would agree that the bike looks pretty cool. 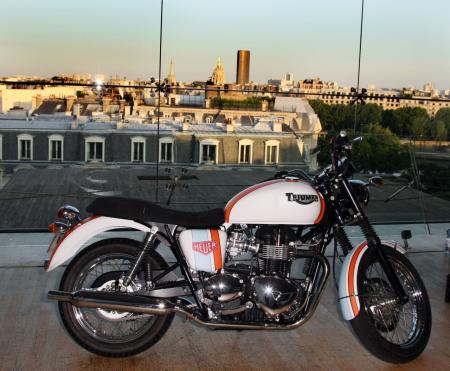 You could call up your local Triumph dealer for further information and also to place an order if you wish. It would be amazing to ride this mean machine on the highways, and enjoy the beauty of the moment. You could also take a look at the McQueen Monaco, which was a watch that was launched by TAG Heuer as a tribute to Le Mans which became a cult classic.
Via: Auto Blog