As we await MB&F to launch their tenth completely new creation, time has come to bid goodbye to what has admittedly been their most successful Machine so far: the HM3. Initially launched in 2009, HM3 went on to become not only the brand’s most successful model in terms of pieces sold, but also in terms of the number of iterations we got to see, like the Megawind, Poison Dart Frog, the HM3 Rebel and the famous Moonmachine watch. Now, Max Büsser and his friends are finishing off Horological Machine No.3 and its movement family with a 25-piece limited edition run of the MB&F HM3 MegaWind Final Edition: Light in Darkness. 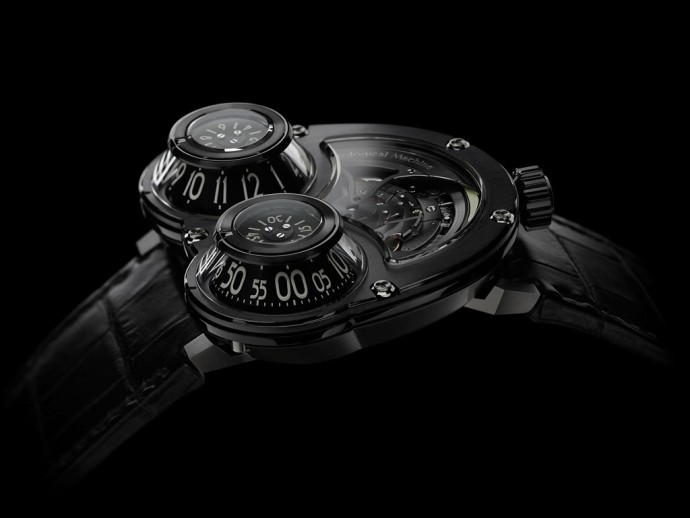 The MegaWind version was launched in 2013. The model came with cones rotating past fixed hands, which made it easier to tell the time and also did away with HM3’s day/night indication to make it slightly more ergonomic than before. The black Megawind FE follows in the footsteps of the black HM5 CM. The 47 x 50 x 17 millimeter case is a black PVD treated 18k gold with a blackened 22k gold and titanium rotor. The time indicators, both hours and minutes now have Super-LumiNova coating. This is a first for the HM3, and previously thought impossible to implement, as the lume has to be hand painted on the curved, trunkated cones of the HM3. The 3D cones on the top are rotating and indicate on the left the hours and on the right the minutes. They can be read from both the side of the top. As mentioned before, the MB&F HM3 Megawind Final Edition will be produced in a limited run of 25 pieces with a retail price of 84,000 Swiss Francs ($88,863 approximately).